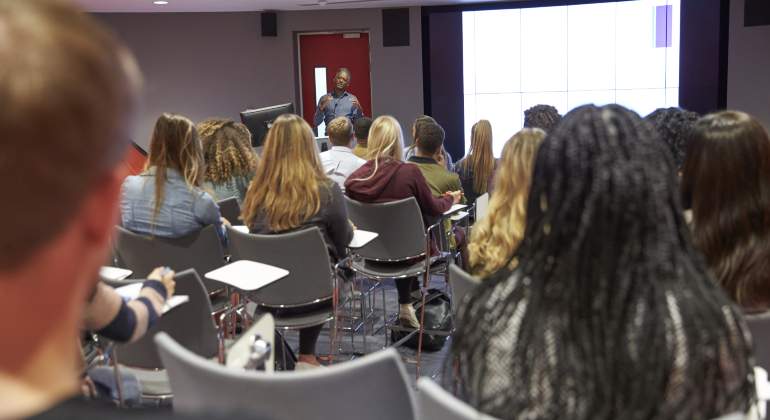 Izquierda Unida Aragón will present a non-law proposal next Tuesday, December 14, in the regional courts for the Department of Education to reduce the current maximum ratios of students per classroom.

The objective of IU is to improve the quality of Aragonese teaching and collaborate in the fight against COVID-19 , taking into account that the age group between zero and 14 years is currently the one that accumulates the highest percentage of infections , especially, the Early Childhood Education classrooms, a sector in which the mask is not compulsory.

The coordinator and parliamentary spokesman of IU Aragón, Álvaro Sanz, has asked that the average ratio of Aragón, to which the Minister of Education always refers, not be confused with the maximum ratio of students per classroom.

Sanz recalled that the head of the branch, Felipe Faci, always says that Aragon has the lowest overall ratios in Spain and applies the means of the total number of students, divided by the total number of teachers in Aragon. An example would be an urban classroom with 33 high school students that, added to a rural high school classroom of 15 students, gives 24 students a general average. “But this theoretical assertion is no consolation for the urban classroom of 33, which continues to have 33,” the deputy pointed out.

This circumstance occurs because in the 2020-2021 academic year, in the midst of the pandemic, the maximum ratios that were used were low to avoid contagions . For example, a Primary classroom had a maximum ratio of 22 students, so that with 23 or more students they were divided into 2 classrooms of 12 and 11 students.

Ignore the minister
However, from the IU they have warned that in the current 2021-2022 course, that of the “new normal”, all the Autonomous Communities “ignored” the Minister of Education, Pilar Alegría , who advocated maintaining the previous low ratios and established ratios highest: 25 in Infant and Primary, 27 in Secondary and 30 in Baccalaureate.

With a circumstance that IU has highlighted and that is that these high ratios can be increased by 10 percent more in some circumstances of schooling. With this increase, the maximum ratios can reach 28 in Primary, 30 in Secondary and 33 in Baccalaureate.

Educational quality
According to the general coordinator of IU Aragón, the Government of Aragon has not cared about the quality of teaching despite the fact that the educational community and specialists have warned of the goodness of the low ratios for individualized attention and to improve the climate of the class”.

Sanz has also criticized the “lack of compliance” of the Executive with the agreements reached in the Cortes of Aragon in relation to the decline in ratios after approving initiatives presented by his political formation and that the regional government has not implemented.

“Nor has Education used for this purpose the extra-Covid economic resources from the State Government received in the years 2020 and 2021,” he lamented.

Negotiations with unions
Faced with this situation, IU proposes in its parliamentary initiative that the Department of Education open negotiations with the teacher unions, with the aim of reaching agreements on the reduction of maximum ratios before May 31, 2022, so that said decrease would be effective in the next financial year 2022-2023.

If no agreements are reached on that date indicated, IU proposes that the maximum ratios to be applied in 2022-23 are: Infant, 20; Primary, 22; Secondary, 25; Postobligatory, 28. In the last point of its non-law proposal, IU asks that the percentage of special increase be lowered to 5 percent and not 10 percent and, when the 5 percent increase in students is exceeded, the classroom unfolds automatically.

“Every day that passes gives us the impression that Covid-19 is going to stay for a while and, therefore, we believe it is necessary to establish measures to combat the virus and it is essential to lower the maximum ratios of students per classroom,” he concluded Sanz.