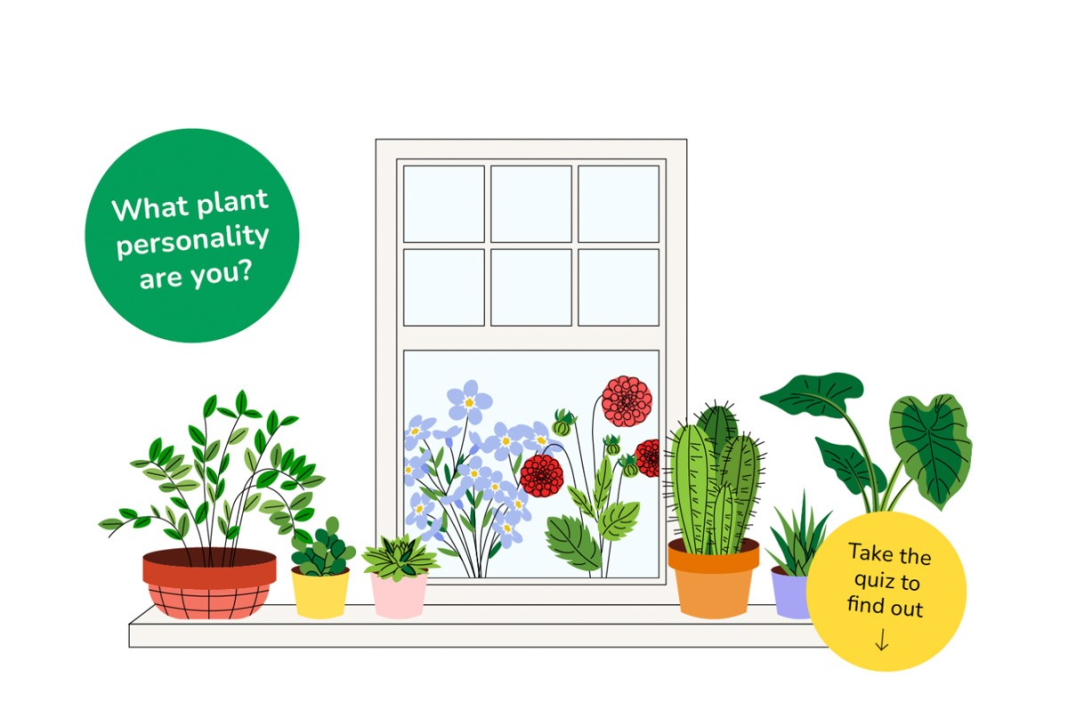 The series of questions were created to help those who struggle to keep a plant alive but want to be green fingered.
Developers worked with gardening guru, Kate Turner, to reveal the perfect plant pairing for Brits based on their unique qualities – taking into consideration personality traits such as whether they’re caring, busy, outgoing or love a challenge.
It comes after a study of 2,000 adults found more than a fifth (22 per cent) find it difficult to keep plants alive, despite 60 per cent feeling more relaxed when they’re surrounded by them.
As a result, 77 per cent would like to have more knowledge on what plants suit their persona and lifestyle the best.
The research, commissioned by Miracle-Gro, found 48 per cent feel productive when in the presence of plants, while 56 per cent find being around foliage and flowers has a positive impact on their mental health.
But when it comes to buying a new plant, most people base their choice on how easy they are to look after (56 per cent), how colourful they are (47 per cent) and how big they get (39 per cent).
Kate Turner, for Miracle Gro, said, “It’s clear that as a nation we love plants, both indoors and out, but we often struggle with keeping them alive.
“It’s easy to assume all plants need the same care, but they can differ greatly, which often leads to mistakes and sad looking leaves.
“We’ve created a fun yet informative quiz for people to easily match their personality and lifestyle with suitable plants.
“There’s something for everyone whether they’re a night owl, a home worker, or a parent.”

The study also revealed what the nation believes to be the biggest benefits of plants, including adding colour to spaces (55 per cent), improving the air quality (51 per cent) and simply bringing joy (38 per cent).
Three in five believe a house doesn’t feel like a home without plants, with two thirds of those polled currently owning an average of six houseplants each.
But 47 per cent would like to own more greenery.
More than half of adults (53 per cent) admitted to killing an average of five houseplants, each leaving them feeling sad (44 per cent), frustrated (42 per cent) and like a failure (29 per cent).
Overwatering (48 per cent) was the most common cause, while 41 per cent believe they didn’t water them enough and 24 per cent simply forgot about it.
Besides from houseplants, 52 per cent also grow shrubs outdoors and 22 per cent in a greenhouse.
When it comes to buying outdoor foliage, the ease of looking after them (54 per cent) is the top priority, followed by how colourful they are (50 per cent).
It also emerged almost half (48 per cent) like to tend to outdoor plants, while 40 per cent claim it helps their mental health.
Seven in 10 of those polled via OnePoll would like their garden to be full of greenery and flowers, and 55 per cent would like to learn more about looking after different plants.
Kate added: “As plants vary so much in terms of the level of care required, there truly is a perfect plant for every person, whether you’re particularly busy and forgetful, or have the time to care for the more delicate varieties.
“With such variety, there truly is an ideal plant for everyone, and Miracle-Gro is on hand to help all amateur gardeners find the perfect match to suit not only their lifestyles, but their personalities too.”