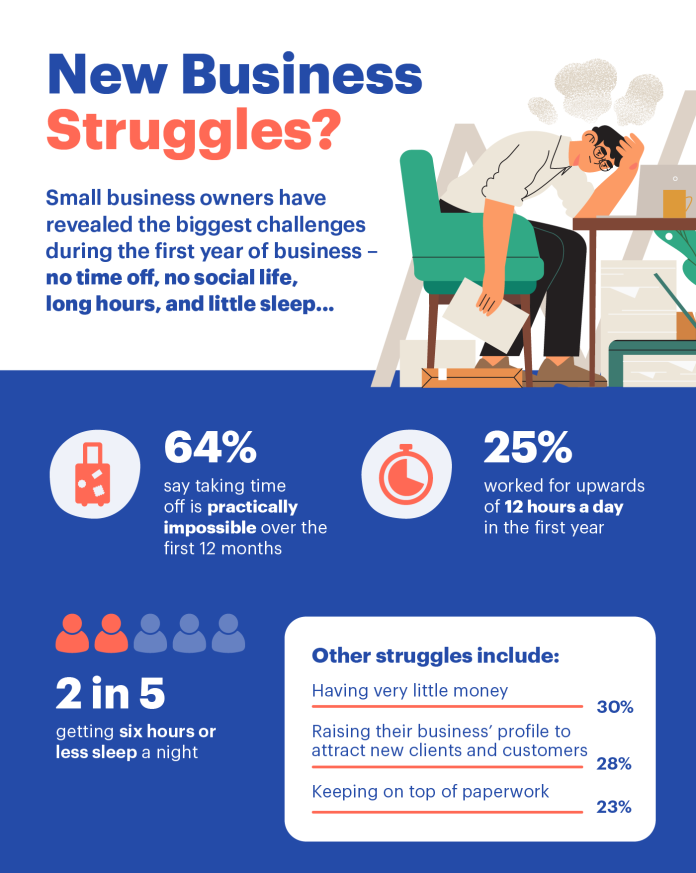 Researchers who polled 1,000 entrepreneurs found taking time off is practically impossible over the first 12 months, according to 64 per cent – as is being able to switch off (29 per cent).
More than a quarter worked for upwards of 12 hours a day in the first year, with four in 10 getting six hours or less sleep a night.
Other struggles include keeping on top of paperwork (23 per cent), having very little money (30 per cent), and raising their business’ profile to attract new clients and customers (28 per cent).
However, the research commissioned by Osome [https://osome.com/uk/], which provides small businesses with financial management tools and accountants, found 91 per cent are glad they started their company.
Although six in 10 admit there are things they would do differently now.
Helena Flores, VP of accounting and tax at Osome, said: “Running your own business is very rewarding but it comes with many challenges – and arguably it’s overcoming these hurdles which can make it so satisfying.
“Getting your finances in order are the foundations of a successful business within the first year.
“Managing money coming in and going out, invoices and understanding what’s selling are the three golden rules for success.
“So, if you get through the first year, running a business usually get easier in subsequent years.
“However, there are ways to make the first year easier – such as getting support from qualified experts like accountants.”
The study also revealed 29 per cent found starting a business to be more expensive than they thought it would be.
Eight in 10 funded the bulk of their enterprise with their own savings – and on average 76 per cent of the money used to get their company up and running came out of their own pockets.

A third also revealed they found starting their venture harder than they had expected it to be beforehand
For 28 per cent, the first 12 months is likely to have been especially challenging as they somehow held down had a second job over that period.
So perhaps it’s understandable two thirds of those polled admitted there were times during the first year when they thought their new venture was destined to fail.
And a fifth of those who felt this way admitted these thoughts went through their mind every single day.
Small business owners also revealed what they would have done differently with hindsight – with making their social media presence more of a priority (39 per cent) a common reflection.
Getting more support with their marketing (27 per cent), finding a better solution for chasing payments (27 per cent), and making more effort to spend time with family (26 per cent) are also among the things owners would do differently.
More than half (53 per cent) also admitted they wish they’d sought out advice from a third party to help them make their business successful.
And similarly, 44 per cent think they should have utilised the services of a third party to look after their admin and keep their financial affairs in order.
But despite all the challenges, the study carried out through OnePoll found 77 per cent would recommend running a business to others.
With being your own boss (70 per cent), having satisfied customers (55 per cent), and making a profit (48 per cent) are top three best things about doing so.
Helena Flores added: “As the study shows, running a business is not easy – especially during the first 12 months.
“But interestingly, the overwhelming majority are glad they made that step which says a lot about how rewarding owning a company is.”