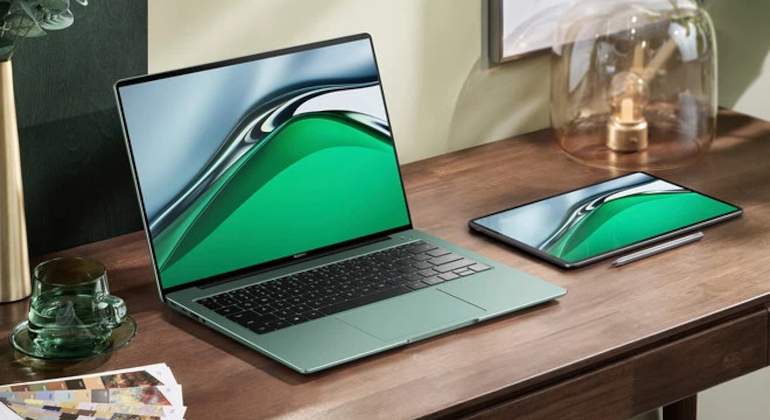 Huawei today presented its new laptops with Windows 11 for the Spanish market, as well as an expansion of its gaming devices.

Years ago, Huawei expanded beyond the Android phones for which it was most famous, developing laptops with which it intended to compete against Apple’s MacBooks. Today, the Matebook range has matured enough to be considered an established brand .

It is also a brand that does not seem to have suffered the same consequences of the US blockade of Huawei; Unlike mobile phones, which can no longer use the same version of Android with Google apps as other manufacturers, the Matebooks not only continue to include Windows, but the models presented today come with Windows 11 pre-installed.

Fred Wang, Country Manager of Huawei CBG Spain, recovered the face-to-face events with this presentation, one more step in the company’s ‘digital life’ strategy that began with the Huawei 8.

Jorge Shunji Cui, Product Manager Matebook Series, proudly presented big data on laptop sales growth. Spain is the largest country in which Matebooks are sold, only behind China, with a sales growth of 150% .

New Matebook 14S
Huawei has always teamed up with Microsoft and Intel, and the new model, the MateBook 14S, is no exception. It brings new colors and a new position of the front camera, one of the biggest criticisms of the current models; and finally, the body has been redesigned maintaining the use of aluminum.

That is why it is very light, 1.43 kilograms , with a thickness of only 16.7 mm, with diamond cut finishes; the new color is Spruce Green, a green inspired by nature, in addition to Space Gray. The screen covers 90% of the front, with ultra-thin bezels and 3: 2 aspect ratio; the 14-inch panel has a resolution of 2.5K, with 400 nits of brightness, more than 1 billion colors and 1,500: 1 contrast.

The screen is tactile, with up to 10 pressure points. For the first time, the Matebook range debuts a fast screen, with a refresh rate of 90 Hz . To protect our eyes after so many hours of use, Huawei continues to have a TUV Rhëinhand blue light certificate.

Inside, the MateBook 14S has an Intel Core HD series for more power, with a TDP of 45 W. It is Intel EVO certified , so it meets Intel’s demands for battery life and speed. To combat the heat, the fans have been redesigned, increasing the height of the blades by 16% and improving airflow by 25%.

In terms of sound, the four speakers (2 ‘tweeters’ and two subwoofers’) offer a more dynamic sound experience. The microphones have been improved for video calls, with AI noise cancellation and custom voice enhancement.

The keyboard has been redesigned with 1.5mm depth for a precise and comfortable typing experience. The battery will last up to 13 hours in local video playback and a 90W charger that allows you to get 3 hours of use with just 15 minutes of charge. The charger is connected by one of the USB-C , of which there are two in the device with Thunderbolt 4, in addition to a USB-A, HDMI and audio jack; Huawei is aware that users have complained about the removal of ports in an attempt to make thinner notebooks, and has improved it on this model. We also have Wi-Fi 6.

For security, we have Windows Hello to use facial recognition to log in, in addition to the touch power button.

These models have Windows 11 pre-installed , since the new system was launched this week. The world has changed a lot, and Microsoft’s Jesús Redondo came out to explain how Windows has changed accordingly, to accommodate a world of video calling, removing complexity. Huawei has also confirmed that all laptops that are already sold in Spain will be able to upgrade to Windows 11 in the coming weeks and months.

Like the past MateBook, the new models will have Huawei Share, to use the mobile screen with the computer. With the new version, we can also use a tablet with the computer , in three modes. In the first one we can see the image simultaneously, in extended mode and in mirror mode. The Mateview monitors will have the wireless projection function, to display the image without the need for cables. We can extend the image of the MateBook to the MateView monitor and the MatePad tablet at the same time.

New Huawei MatePad Pro
Huawei has also had time for its new tablet, the Huawei MatePad Pro 12.6-inch high resolution, HDR10, DCI-P3 color gamut and more. For the first time, they integrate 8 speakers in a tablet, and it has the latest Kirin 9000 processor and a new NPU for Artificial Intelligence. The new M-Pencil digital pen will be able to detect pressures of up to 0.4 grams, and will have a physical button to switch between writing mode and eraser mode; it will be compatible with the rest of tablets.

The MatePad Pro uses the new HarmonyOS 2, with a new interface, new widgets and applications. The battery is more than 10,000 mAh, allowing up to 14 hours of video playback.

New Huawei for gaming
The new 27-inch MateView GT monitor, similar to the model it already offers but in a different size. Huawei wants to convey that it has come to the monitor market to stay, with leading-edge features and joystick control with five image modes, as well as low blue light certification. It will have HDMI, DisplayPort and USB-C connectivity; the charger is USB-C and we can use it in the rest of the products.

To complete the launches, Huawei will launch its first gaming mouse in Spain, the Wireless Mouse GT, with high sensitivity, RGB lighting, wired or wireless charging; in the latter case, it can be used with a wireless charging mat.