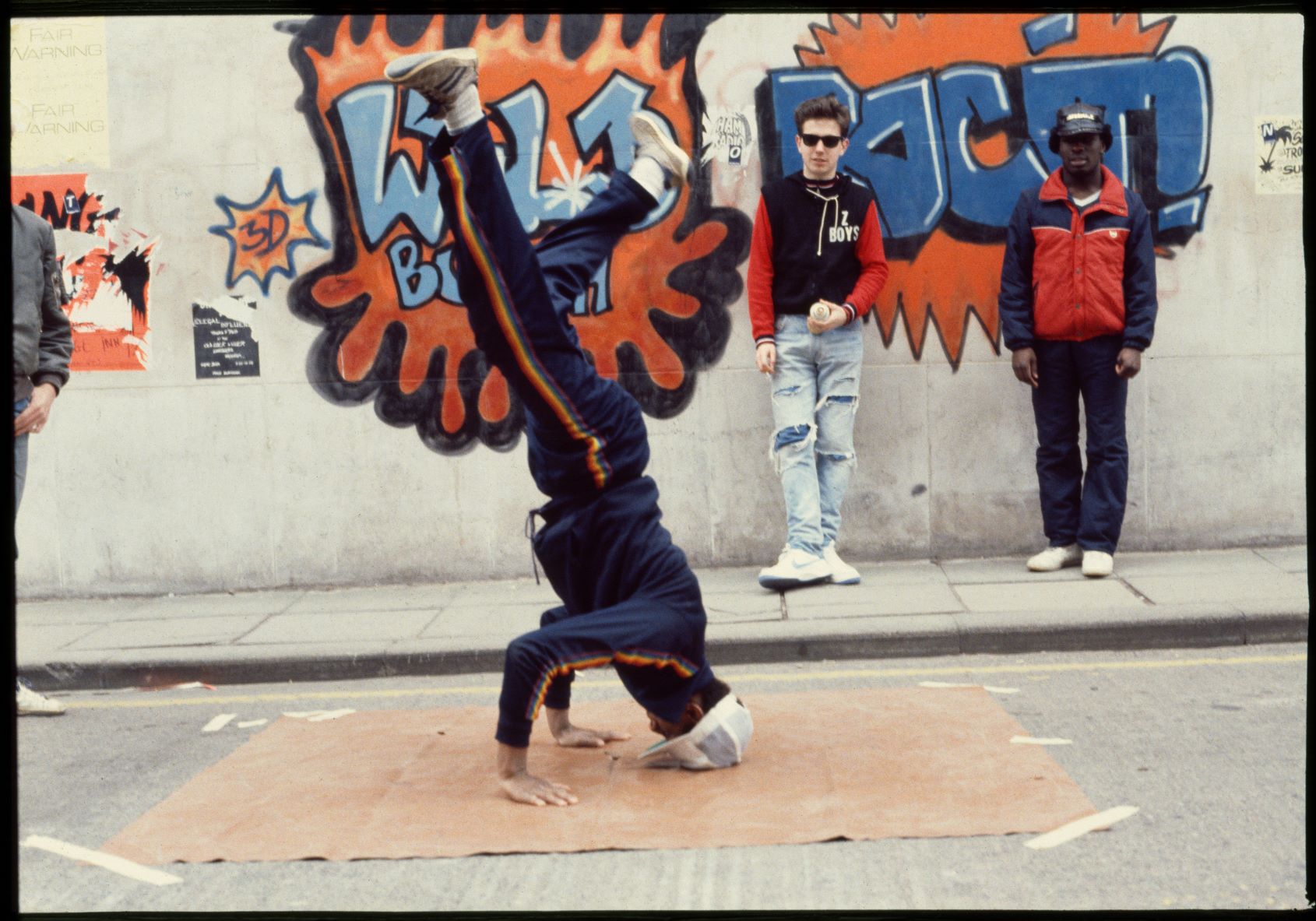 Vanguard Bristol Street Art: The Evolution of a Global Movement

Vanguard in partnership with Vans presents Bristol Street Art: The Evolution of a Global Movement – an exhibition exploring the instrumental role of Bristol’s creatives in the development of British Street Art, from the 1980s to the present day.

The seminal works, notable moments, key events and extraordinary artists belonging to Bristol’s dynamic history are highlighted in this comprehensive and compelling exhibition, which examines the creative response of the city’s pioneering underground scene throughout the UK’s turbulent social and political history and considers the drive for social change underpinning the work of many of today’s street artists.

From anarchist origins in the ‘80s and ‘90s through to the explosion of the scene in the early ‘00s, the exhibition brings together one of the largest collections of original works and memorabilia ever seen in the UK.

Beyond Bristol, Vanguard explores the evolving disciplines of British and Irish artists moving from the street art conversation to bridge contemporary fields by fusing traditional techniques with new technologies. The exhibition also reflects on how a new generation of global creatives are advocating for social and environmental awareness through art on the streets.

From bronze sculptures to immersive displays, Vanguard reveals a host of new original pieces, as well as rare and unseen works, including bespoke edits from the iconic filmmakers and photographers who documented the unfolding scene.

As part of the exhibition, Vanguard will also launch a series of exclusive releases from some of Bristol’s finest creatives, including:

·        Artist led merchandise from various artists featured in the exhibition

Outside of the exhibition, Vanguard has partnered with Vans to launch an exciting city-wide, community-based outreach programme running throughout the duration, aligning with the United Nations 17 Sustainable Development Goals (SDGs). The outreach programme hopes to promote discussion and participation at the intersection of culture and sustainable action and will include art activations, workshops, panels and film screenings.

New and unique works by Bristolian, British and international artists include:

Further details on the Vanguard book, album, outreach events and artist releases will be released shortly.

Vanguard | Bristol Street Art: The Evolution of a Global Movement is kindly supported by Vans.

Vanguard | Bristol Street Art: The Evolution of a Global Movement

Graphenstone | Graphenstone UK is the official paint sponsor for Vanguard and has donated paint for the interior exhibition and the outreach workshops. Due to their natural and ecological composition, the sustainable raw materials used to manufacture Graphenstone paints are not only free of toxic components but also help in the reduction of air pollution. Graphenstone’s award winning, lime-based paints absorb CO2 as they cure and can eliminate harmful gases such as NOx, SOx, Carbon Monoxide and VOC’s, helping to purify the air around us.

Niche Frames | Niche is a Bristol based business that’s been picture framing since 1995, providing picture frames and printing services to Bristol’s street artists from their inception. Niche have framed and printed specific works for the Vanguard exhibition.

M Shed | Housed within a 1950s dockside transit shed, M Shed is an exciting and innovative museum for Bristol, telling the story of the city through the experiences of people who helped shape it. Rich collections of objects, art and archives bring these narratives to life in three galleries: Bristol Places, Bristol People and Bristol Life.  Visitors can ride M Shed’s largest exhibits – the cranes, trains and boats from Easter to October and the gallery on the second floor displays temporary exhibitions throughout the year.

The SDGs | The Sustainable Development Goals (SDGs) or Global Goals are a collection of 17 interlinked goals designed to be a “blueprint to achieve a better and more sustainable future for all.” The SDGs, set in 2015 by the United Nations General Assembly and intended to be achieved by the year 2030, are part of a UN Resolution called the “2030 Agenda.” In adopting this framework, Vanguard hope to maintain a mindful approach to the communities and cultures they will be engaging with. Using the global goals, Vanguard will work towards a balanced and considered approach that is both inclusive and participatory for the general public. Vanguard are members of the SDG Alliance of Bristol to ensure sensitivity in aligning with local green stakeholders and local values.

Sky Arts | Sky Arts exists to bring more art to more people across the UK. In 2020, with the creative industries under serious threat, Sky Arts threw open their doors to make the channel free for everyone to watch. They’ve redoubled their mission to increase access to the arts and are committed to getting everyone involved as the industry recovers. The fact is, we need the arts now like never before, and Sky Arts brings them straight to your living room.

You can watch Sky Arts for free on Freeview channel 11 and Freesat channel 147.  If you’ve got Sky or a Now TV entertainment pass, you can also watch over 2,000 hours of shows exclusively on demand.

Juxtapoz Magazine | Juxtapoz is the world’s leading printed art magazine covering underground and prevailing art cultures. They tell the story of contemporary art through the eyes of the creative. Whether inspiring creativity or supporting the arts, each project is carefully curated to best exemplify the working life of the artist.

Crack | Crack is an independent platform for contemporary culture. Originally founded as a magazine in Bristol in 2009, Crack went on to launch in Berlin in 2015 and Amsterdam in 2017. Representing boundary-pushing art while maintaining creative authenticity and originality the platform celebrates all aspects of contemporary culture.

With a passion for projects connected to the street, FWTV is a regular of art festivals around the world and now is proud to partner with Vanguard in Bristol.

Felix is a veteran of the first wave of Bristol graffiti, whose work has taken him across Europe, South Asia and East Africa. He is the author of two books on Bristol street art and graffiti; is a freelance curator, who worked on the hugely successful Crimes of Passion show in 2009; and is an educator with over 15 years’ experience teaching street art, both in the UK and abroad.

Born and bred in Bristol, John was a key figure during the development of Bristol’s world-famous graffiti scene. In the mid ‘80s whilst working as a youth worker at Barton Hill Youth Centre, John encouraged young artists to paint on the walls, transforming them into a notorious technicolour beacon of creative expression.  For the last 8 years, John has been the tour guide for Where the Wall, Bristol’s hugely popular street art walking tours, talking with visitors to the city about the past 35+ years and today’s scene that the city is globally known for.

Tom Bingle aka Inkie, has emerged as one of the most prolific graffiti writers in UK history working across fashion, jewellery, design and the visual arts. He received International recognition following his infamous role in the 1989 UK police raid ‘Operation Anderson’.  Noted as the largest UK graffiti bust, Inkie was identified as the ‘Kingpin and was arrested along with 72 other graffiti writers. Inkie’s work is characterised by a unique collaboration of graffiti and figurative imagery. His widely recognised style draws on Art Nouveau influences with an unmistakeable urban twist; portraits of beautiful women are usually accompanied by poignant words or phrases; faces are understated, almost anime and are framed with his iconic stylised flowing hair. He has worked as head of design for SEGA Europe, Xbox and until recently, worked as Jade Jagger’s in-house designer. He also runs a design studio. His work is coveted by celebrity followers including Cara Delevigne, Robbie Williams, Jade Jagger, Fatboy Slim and Sean Pertwee. He has exhibited worldwide both on the streets and in galleries.

Mary McCarthy | Project Director | Mary is a leading urban contemporary art specialist, who has spent the last 20 years following street art, forging contacts with artists, buyers, writers and followers within the counterculture movement. Prior to setting up her own consultancy, Mary worked with Getty, Christies, Bloomsbury and Dreweatts, she set up MM Contemporary Arts Ltd in 2012 and has brokered some of the highest profile (and most discreet) urban contemporary art sales. In 2013, she partnered with Paris based auction house Digard to develop their biannual global sale of urban contemporary art, achieving record sales in this sector.  In 2018, Mary stepped away from the auction world to work on various art related projects including a TED talk in Switzerland and consulting on various exhibitions worldwide.

Charlotte Pyatt | Creative Director | Charlotte is a creative consultant and producer with a passion for projects activating positive change and discussion through art. From consultancy to creative direction, over the past ten years Charlotte has been managing artist profiles, independent projects and cultural initiatives. Projects and campaigns include Splash and Burn, Void Projects, Towards 2030 and #bushfirebrandalism. Recent lectures include Sotheby’s Institute NY, Goldsmiths University London and the Lush Climate summit. Charlotte has an accreditation from Harvard for Sustainable Business strategies.

Dave Smeaton | Production Director | Dave Smeaton was the proprietor of Alterior in the early 90’s together with Justin MacCarthy and is a Bristol based entrepreneur whose current business portfolio includes several well-known pubs and bars in the city. He has played an active role in Bristol’s cultural scene since the early 90s as a DJ, musician, fashion retailer as well a street art curator and collector.

Justin MacCarthy | Artistic Director | Artistic Director and co-curator of Vanguard, aka Dicy, creator, inventor and designer, Justin has lived in Bristol for over 20 years and has been an integral part of the second generation of street artists to emerge from the city.

Graham Dews | Co-curator and Design Director | Also known as artist Paris, Graham was a highly influential player in the renaissance of the Bristol street art scene during the late ‘90s / early ‘00s. He has become a major exponent of the artform internationally.  In recent years his collaboration with Coldplay led to global recognition through the design of their Album cover Mylo Xyloto and visually contributing to award winning videos and concerts. 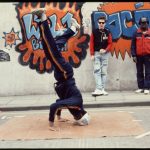 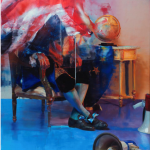 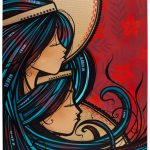 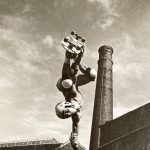