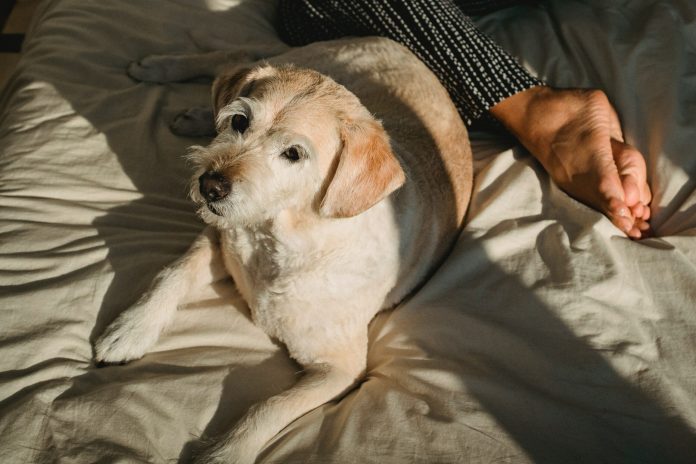 By Joseph Staples // SWNS
NEWS COPY w/ VIDEO + INFOGRAPHIC
If it seems indulgent to let your pet snooze on your bed, you may want to cozy up together more — new data suggests that people who co-sleep with their pets may reap the benefits of better sleep.
A survey of 2,000 American pet owners discovered that seven in 10 believe they get better quality sleep when their pet is in bed with them at night. Half (51%) even reported having a pet in bed helps them manage their stress and anxiety.
Overall, 47% of pet owners note it’s easier to settle in for the night when their pet is next to them, and 42% said the company also makes them feel more secure.

Forty-three percent said they actually prefer to have their pets with them as a source of “white noise.”
With May being National Pet Month, furry friends around the country will be celebrated even more than they already are. In fact, the study, commissioned by mattress company Sealy and conducted by OnePoll, confirmed that most people (nearly 80%) treat their pets like humans, and 66% allow their animal family members to sleep on their bed with them.
While over half (54%) of individuals said they allow their pets in bed specifically because they’re considered family, 58% of those in relationships would prefer to share their bed with their pets versus their partners.
“Having a good night’s rest is crucial to our overall health and well-being,” said Brent Pfister, senior vice president of marketing at Sealy. “As shown by this study, co-sleeping with pets can bring a sense of security and can help people – and their pets – settle in easier for bedtime; however, many people sleeping with their pets experience interrupted nighttime sleep – and so may also be sacrificing overall sleep quality and some of the more physical benefits gained from a night of good sleep.”
In fact, while the study found owners may feel their sleep is better when shared with a pet, this could be a pet placebo.
Owners reported their pets disrupt their sleep an average of at least two nights per week, and nearly a quarter of respondents said their animal companions’ restlessness “always” wakes them up in the middle of the night.
And although 57% of owners describe their animal friend as the perfect “bed warmer,” separate research by Sealy found that 62% of U.S households report feeling overheated while sleeping as a common disruptor to getting a good night’s sleep.
When it comes to sleep schedules, two-thirds of respondents admit their pet’s internal clock is better than theirs — acting as alarm clocks in the mornings.
Meanwhile, roughly the same percentage (64%) said their pets also have a self-assigned nightly bedtime, which they also use to set their own sleep schedule — with 57% of pet owners reporting their own bedtime is impacted when their pet decides to go to sleep.
“There are several relatively easy steps people can add to their sleep routine to get the high-quality sleep they need,” continued Pfister. “The first two suggestions are limiting exposure to disruptive blue light from phones and TVs before bed, and as much as possible, going to bed and waking up around the same time every day.
“From there, a high-quality mattress may help both regulate temperature and reduce motion transfer, both of which go a long way when Fido wants to snuggle.”
5 PERKS OF CO-SLEEPING WITH A PET ACCORDING TO RESPONDENTS: