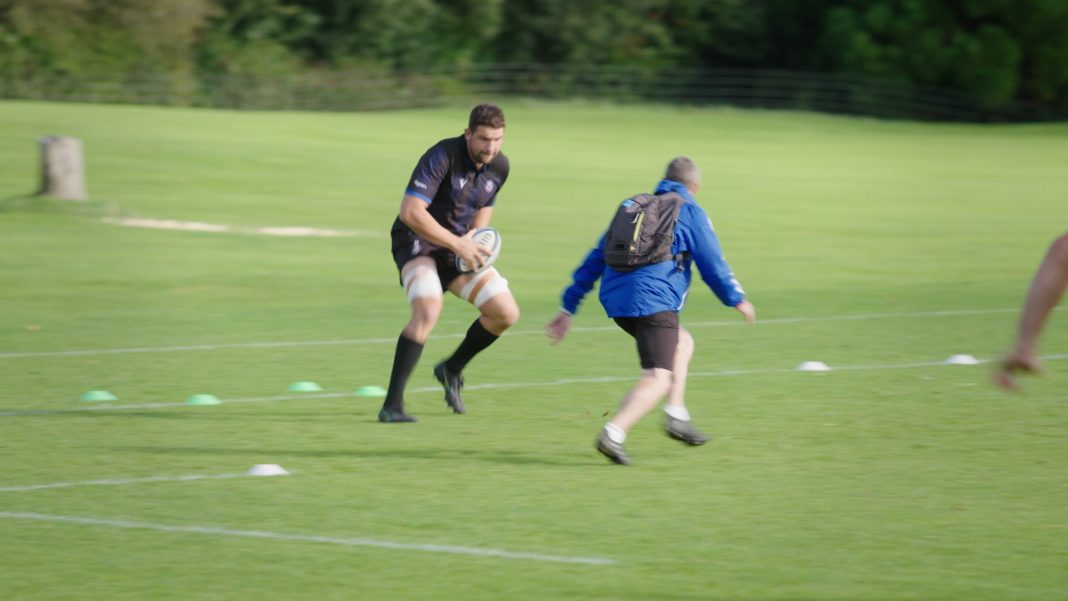 To tie in with the Six Nations, players were fitted with an ‘air quality backpack’ created by Dyson, which monitors pollution levels while on the move.
Engineers designed the portable air monitoring device to reflect existing sensing technology used in Dyson air purifiers, while accurately capturing PM2.5, PM10 and VOC and NO2 exposure.
Data indicated pollution spikes during routine training activities like weightlifting in the gym.
But the highest pollution spike was from the pyrotechnic display which went off at the beginning of the game being monitored.
With gas cannons igniting to produce thick smoke, levels of PM2.5 recorded by the air quality backpack – at that point positioned right next to the cannons – momentarily reached as high as 4000ug/m³, a 1600x increase compared to before the pollution event.
While the levels recorded were high, it was a short pollution event lasting less than a minute so overall exposure time was low.

Dyson Lead Design Engineer in New Product Innovation, Sam Railton, said: “When we talk about air pollution exposure, it’s not always about removing the source of those pollutants.
“Purification can limit pollution exposure indoors, using filtration to capture pollutants and project cleaner air around the room.
“In both indoors and outdoors environments, reducing the amount of time you are in close proximity to a pollution event is a good way to lower your overall exposure and, in some cases, this might mean physically moving away from the pollution source.”
Peaks in pollution were identified when the players trained in the gym and spent time in the medical room during recovery periods.
Volatile Organic Compounds (VOCs), which are commonly released from cleaning sprays and aerosolised personal care products, were detected, increasing by 40 times during the gym session – the highest VOC pollution peak identified that day.

Higher pollution levels were also identified when the players were having lunch at the training ground and breakfast on game day.
NO₂ and PM2.5 can be released during the combustion process while cooking, which may have contributed to these spikes.
Overall, pollution levels while travelling between locations remained relatively low, thanks to the avoidance of peak travel times and busy public transport hubs which can often contribute to heightened pollution.
When asked about the impact of Dyson’s findings, Scotland and Bath Rugby player, Cameron Redpath, said: “While I think many of us are aware of outdoor pollution, I hadn’t really considered possible causes of indoor pollution before this project with Dyson.
“Things like cooking or using sprays in the gym and changing room can also contribute to pollution.
“I think it’s good for the team to be conscious of these sources so that we can make small changes that may help improve our personal exposure.”