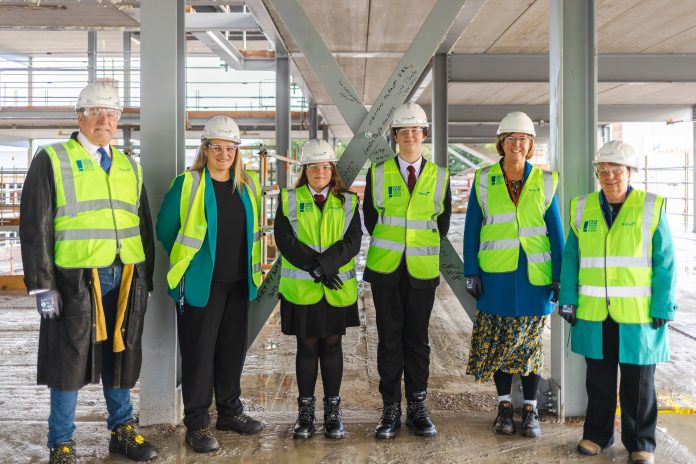 A special ceremony has been held at Hartshill Academy to mark a significant milestone in the construction of its new home. Pupils and staff added their signatures to the steel frame destined to become part of the art room on the first floor when the building is completed next year.

On 1 November 2022, pupils Laila Hutton from Year 8 and Corey Price from Year 9 were joined by academy principal, Lorraine Taylor, chair of governors Ann Melville, and Marion Plant, OBE FCGI, chief executive of the Midland Academies Trust, who added messages to the frame including the academy’s values of ‘Heart, Ambition, Respect and Tenacity’.

The latest drone images show progress at the academy’s Church Road home as work continues to deliver a new state-of-the-art facility for the local community with the installation of exterior wall panels. The new building which is being constructed by Wates is expected to be ready for the academy to move into next September.

Hartshill Academy, part of the Midland Academies Trust, is one of the first academies to benefit from the Government’s national Academy Rebuilding Programme. The redevelopment project will deliver a brand-new facility that is fit for 21st century teaching with a target to be net zero carbon in operation.

On her tour of the site, Laila said that she is looking forward to completing her academy career in the new building after which she plans to continue her education and become qualified as an interior designer. Corey is keen to see the science labs and is committed to a career in neuroscience.

Marion Plant, OBE FCGI, Chief Executive of the Midland Academies Trust said, “We are delighted to mark another significant milestone on our journey to delivering a new academy building for Hartshill Academy. It is a privilege for us all to be able to add our names to the steel frame as we look forward to the next stage in the building’s construction. It will not be too much longer before our vision is enhanced through a fabulous and inspirational learning environment.

“Hartshill Academy has a long tradition of educating pupils and enabling them to develop and create successful futures. The new building will enable us to deliver even better learning opportunities for our pupils and for future generations, as well as creating a hub for the local community and a beacon for raising aspirations across the local area.”

“It will provide a secure and welcoming environment for pupils, enabling them to reach their full potential with open spaces and wide corridors that encourages pupils to engage fully in their learning and to become ever more ambitious and confident for their futures.”

“Sustainability is at the heart of the new academy’s design with facilities making as much use as possible of natural light, with efficient use of power to save on operating costs and to help reduce carbon emissions.

“Academy life is continuing as usual during redevelopment, and it is planned that the academy will move into its new building in September 2023. We are working closely with our neighbours and with Wates to minimise any disruption to the local community during the construction process.”