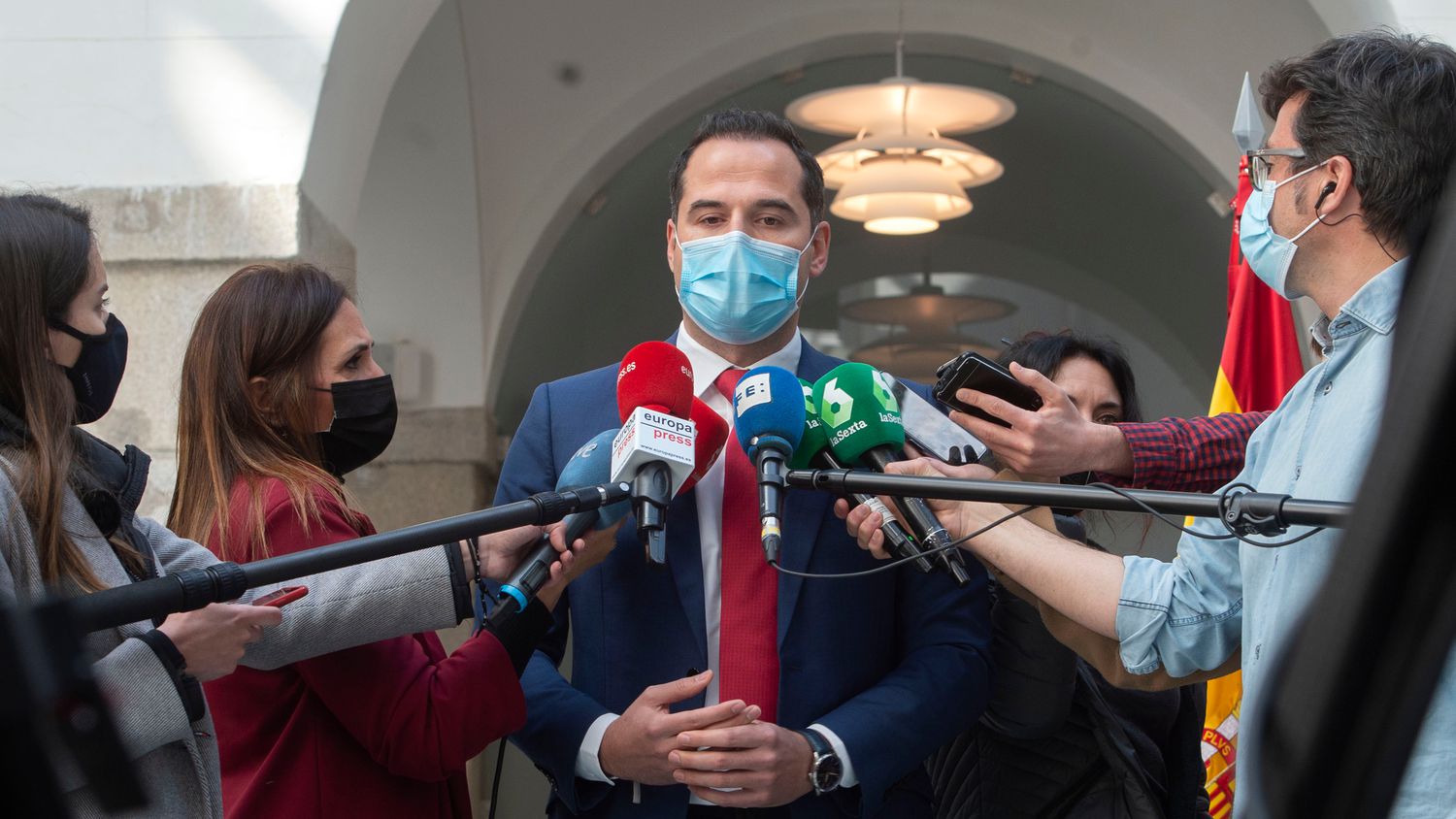 The rejection of the Superior Court of Justice of Madrid to the appeal of the Assembly against the call for elections of May 4 yesterday gave the starting signal for a campaign in which the parties will seek to hunt down the vote of Cs.

The formation of Inés Arrimadas is mired in a crisis that threatens its own survival, and, according to the February CIS barometer, it has the least loyal voters. “We know that they have set their objective in Cs,” Ignacio Aguado, the leader in Madrid, acknowledged yesterday, who denounced that PSOE, PP and Vox want to promote an absorption process like the one that ended in 2019 with UPyD.

The Vice President, Minister of Sports, Transparency and spokesman for the Government of the Community of Madrid, Ignacio Aguado, during a meeting with the main representatives of the economic and tourism sector in the region, at the Real Casa de Postas, in Madrid (Spain), March 9, 2021 The meeting discussed the role of safe mobility in the economic recovery of the region. MARCH 09, 2021; IGNACIO

The first step in the campaign to win the vote of the voters of Cs was taken on Thursday by Isabel Díaz Ayuso. Less than 24 hours after dissolving the Assembly and calling elections, the president of the Community of Madrid made public her desire to have positions from Aguado’s party, and also her voters, to unite the center-right under the acronym of the PP.

A full-fledged takeover bid in which the PSOE and Vox also want to participate. They want to erase the political center from the map to handle us at will and reinstate the Spain of the parties, but we are not going to allow it.

“We know that they have set their objective in Cs,” Aguado, regional leader of training, and former vice president of the Diaz Ayuso Executive, acknowledged yesterday in a statement. “They want to erase the political center from the map to handle us at will and reinstate the Spain of the parties, but we are not going to allow it,” he added.

That was never the ideal scenario for the interests of Cs, which has always been one of the national formations with less loyal voters, according to all the polls since it began its national expansion from Catalonia in 2015.

Thus, 83.2% of the voters who declared in the February CIS that they had voted for Albert Rivera in the 2019 general elections also recognized in that same barometer that they vote for one party or another, or do not vote, depending on what they most like. convince them when the elections arrive. Only 3.7% of those citizens claimed to be faithful to the Cs ballot.

In parallel, those voters left clues that they can opt for very different projects, although they have agreed to support Albert Rivera’s in the general elections. 28.2% acknowledged that they could opt for the PP, 6.2% for Vox, and 5.9% for the PSOE.

In light of those records, strategists in all of these formations are aware of two things. First, that these data reflect that there is a spectacular electoral booty within their reach: 625,000 people supported Ciudadanos in the 2019 regional elections, which translated into 26 deputies in the Assembly and placed the party as the third most important force in the Parliament of Madrid.

And second, that it is not the first time that a formation tries to grow from the center and to the right, scratching voters at the PP, and then enter into crisis: it has already happened with UPyD, the formation led by Rosa Díez, which went from adding almost 200,000 votes in the autonomic elections of 2011 (eight deputies) to remain at 64,500 in those of 2015 (without representation) and some 4,690 in those of 2019 (no deputy).

The electoral barn of Cs
Madrid, with Catalonia, has been the most important electoral granary for the party now chaired by Inés Arrimadas. Here was its most powerful institutional representation, with the Catalan, and here it is supposed to have the most mobilized bases.

The first went up in the air with the electoral advance, which ruined the six ministries, the vice presidency and the spokesperson for the coalition government with the PP. The second will be examined on May 4. The elections come at the worst time for Cs.

Expelled from the Government by Díaz Ayuso, the party assumes all the wear and tear of the management of the pandemic, without compensating it with the shine of the vice presidency that Aguado had.

Accused of causing the problem due to the possibility that he had raised a motion of censure with the PSOE, his efforts are now dedicated to denying that assertion, and not to raising an electoral project. Its leader, finally, has suffered a wear that far exceeds that of other political careers that are already combined in the past.

Although Aguado assures that he will appear in the primaries to be the electoral poster of Cs for the third time, neither the national leadership has given him explicit support, nor is he assured of an easy victory. Although he has the support of the Madrid organization, exemplified in César Zafra, his right hand and organizer of the bases, yesterday it was already known that he will have at least one rival.

First rival for Aguado
“The recourse before the Justice was intended for those who represented Cs [in the Assembly] to retain their privileged legal status, after having failed those who trusted them,” said Juan Carlos Bermejo, from the critical sector of training, to the announce your candidacy. “We already know who is responsible for the voters not wanting to trust Cs.”

The presence of strong candidates in these primaries will serve to measure how much future the Cs politicians themselves grant the project. Less than two months before the appointment with the polls, they all know that PP, PSOE and Vox are working to turn the electoral campaign into a competition to snatch the voters they have left.