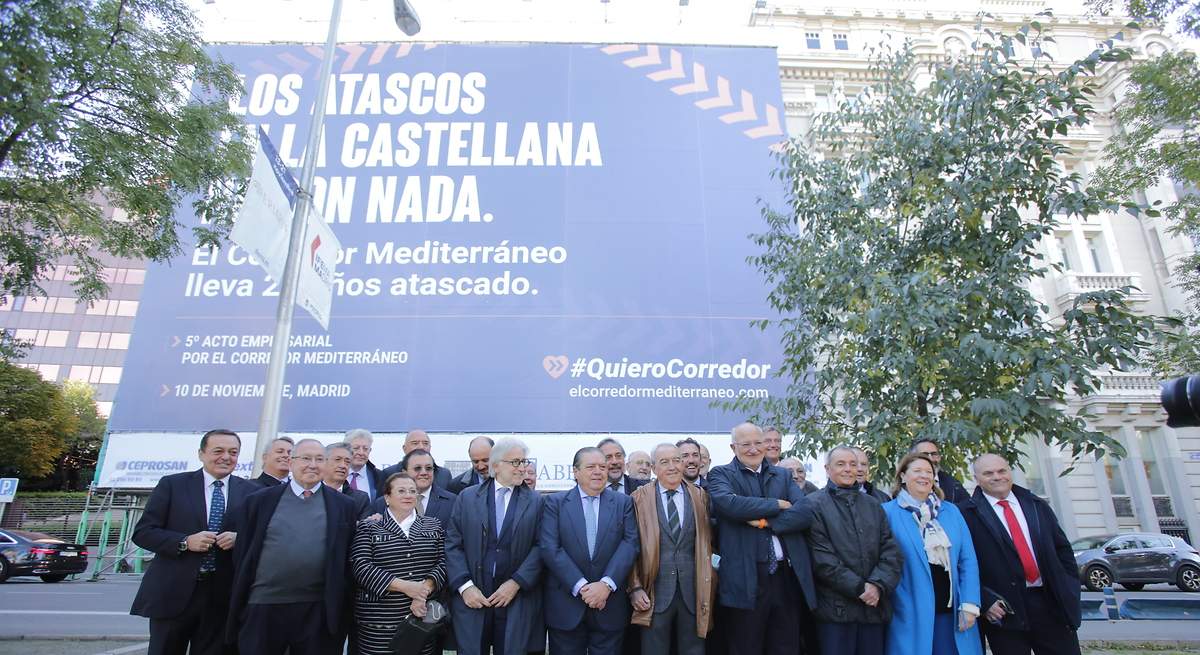 The Mediterranean Corridor will not be completed within the established deadlines. This has been denounced by the businessmen who, through Vicente Boluda, president of the Valencian Association of Entrepreneurs (AVE), have indicated that “the horizon of 2025 is not going to be fulfilled” at the beginning of the ‘I want to run’ act. More than a thousand representatives of the national business community have met this Wednesday in Madrid to demand the completion of some works that are already late and that, according to Boluda’s words, “put the competitiveness of Spanish companies in check.”

“We were born in 2016 because we were fed up with being long,” Boluda insisted , recalling that from ‘Quiero Corredor’ they review twice a year the progress in infrastructure works that they consider key for transport in the Mediterranean arc. “It is going slow,” he summarized, recalling that the development of this infrastructure has “benefits that cannot be discussed”, both in the economic, environmental, social and territorial spheres.

These same words have been supported by Juan Roig, president of Mercadona , who recalled that “if we want to have a supportive Spain, with the same possibilities for all and a healthy economy”, it is important to go beyond the radial design of the infrastructures. ” Circular Spain is very important and for this the Mediterranean Corridor “.

“This is not a problem of a political party. There have been seven presidents of the Government of different parties and the Mediterranean Corridor is not done.” Roig has pointed out the benefits of radio distribution but recalls that “the fact that there are cities that we cannot be united” is discrimination with which they do not agree.

“Currently between Valencia and Alicante, you are going to Madrid because you almost arrived earlier,” Roig has put on the table , so if we want to make freight transport sustainable, it must be done by train. “We want to get it in 2025” .

Boluda, for his part, recalled that they will not stop until the completion of the infrastructure, a key work with which “Spain would be much more competitive.” In his words, the losses caused by this delay in the Mediterranean Corridor for companies are “incalculable” due to the difference in export costs and he asks to take advantage of European funds as has been done so far.

Asked about the decision of the European Parliament to ask for explanations on this issue, Boluda indicates his agreement with the decision and recalls that “we ask for them but we only get good words.” “If Spanish civil society asks for one thing, in the end the politicians do it, but there are always priorities. This would be a great development for all of Spain,” Roig recalls .

Transport commits to 2026
At the event held this Wednesday in Madrid, the Minister of Transport, Mobility and Urban Agenda, Raquel Sánchez , has recognized the need to develop this infrastructure and has promised to execute all the roads between Almería and the border by 2026 French . “I am pressing in all the departments of the Ministry, since we cannot allow ourselves more delays. Of course, we are facing a historic moment, with the opportunity to tackle a true transformation in this country, still with many challenges ahead,” he said.

Sánchez recalled that the General State Budgets (PGE) for 2022 include an item of more than 1,700 million euros for the development of this infrastructure. “The railway must become the great mode of transport, since it improves the living conditions of citizens, competitiveness, the decarbonisation of the economy, while progressing with commitments with Europe. A very great effort must be made. important for goods to use the railroad as a preferred means of transport “, he concluded.