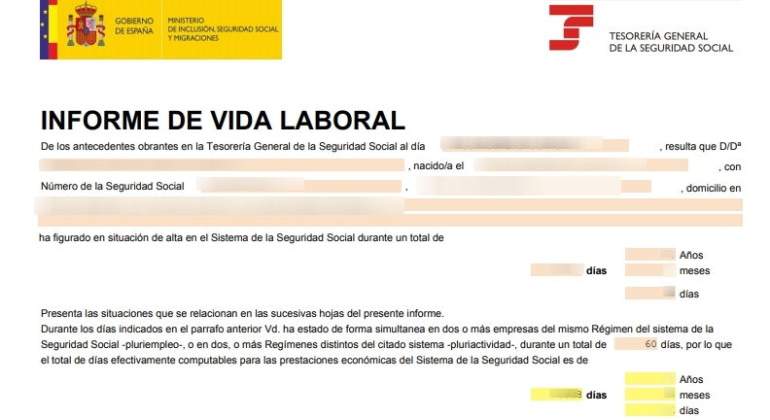 Working life is an old acquaintance for workers, since it is one of the most familiar documents and recognizes the periods that have been contributed to Social Security, that is, the days that we have worked in the eyes of the agency. However, it has many aspects that are not always taken into account.

That is why the Social Security has informed on its website of the keys to this document , which can be downloaded on the Import @ ss online procedures platform and whose delivery can also be requested by post in the service ‘Receive report in my home’.

It is official and free
What work life says ‘goes to mass’. These are the data handled by Social Security and what the Administration will consider that we have quoted for future requests for pensions or other benefits. Be wary of all those ways of ‘getting’ it in exchange for a sum of money, since it is a document that is accessed totally free.

They are the Social Security data
As it is official, it collects the Social Security data, so certain errors may occur in very specific cases, such as the contribution bases of very distant years. If you are in one of these situations, you can request the correction of your working life by providing the appropriate information.

It is divided into regimes
The information on working life will appear structured in regimes, so that a person who has worked as an employee and later as a self-employed person will have their data classified.

It takes into account assimilated situations
In working life, not only are the contribution periods considered when they are registered with Social Security, since those of assimilated registration are also counted: cases of collection of contributory unemployment benefits, paid and unused vacations, agreements special …

Includes discharge dates …
The document specifies the date on which the worker began his activity registered in the Security or, if this registration was made incorrectly, the date on which it began to take effect.

… and the unsubscribe
The withdrawal date marks the moment in which the worker stopped contributing to Social Security in the company. The agency explains that this does not apply to sick leave .

Data on partial contracts
In this type of contracts, the CTP% appears, which indicates the coefficient of partiality of the working day. Thus, if the worker has a four-hour shift out of a total of eight, he will have 50% and if his shift is six hours, it will be 75%. This is important because it will mark the worker’s contribution.

Quotation groups
They are in the column ‘GC’ and depend on the profession, sector or degree. Thus, number 1 is for graduates and engineers, 10 for laborers and 11 for workers under 18 years of age.

This is how the days are calculated
What we usually look at when reading work life is the number of days worked, but sometimes the number may not correspond to our calculations. In these cases, it will be necessary to attend to the hours worked in part-time contracts or to situations of multiple activity ( in several schemes at the same time ) or moonlighting (in several companies within the same scheme).