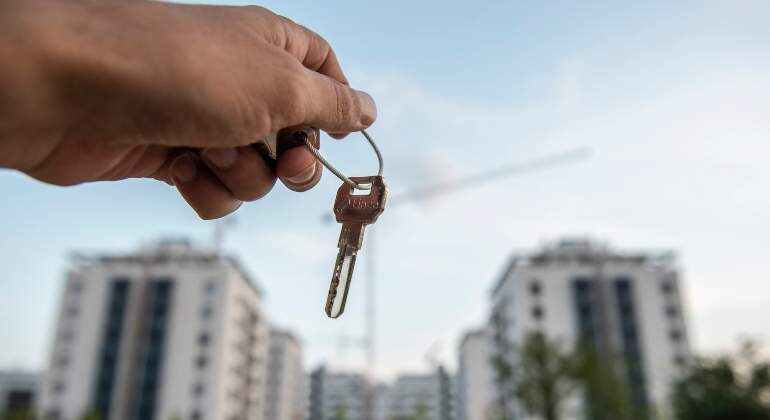 The bank is cleaning its balance once again in the heat of the mortgage market pull despite the pandemic . The entities, through small lots and individual sales, have cut the volume of foreclosed properties (mainly inherited from the last financial crisis) by about 1,170 million so far in 2021.

This decrease is almost 5% over the portfolio they had at the end of 2020 and contrasts with the rise experienced in the same period of the previous year , of 0.3% as a result of the inflows due to bad debts and mobility restrictions between March and June.

With this new impetus from divestments, the flats and land in the hands of the main entities has fallen from 22,500 million.

Specifically, the gross value of the properties under its ownership is 22,472 million , according to the figures published in its semi-annual reports, not including Liberbank, which has recently been absorbed by Unicaja through the merger process. If they were taken into account, the volume would be around 25,000 million.

The bank that owns the most brick is Santander , which is the only major bank that did not dispose of most of the assets awarded for non-payment in previous years, as BBVA , CaixaBank or Sabadell did , which suddenly placed the vast majority of funds in operations that were historic. However, the Cantabrian group did carry out the first of these transactions with Popular’s real estate after its acquisition.

In this way, the group chaired by Ana Botín has a balance sheet of 7,754 million, after having registered a decrease of 2.3%, the lowest of its largest competitors in the national territory. Santander has drained floors and floors for 183 million.

On the other hand, the entity that most managed to lower those awarded in the first half of the year was Bankinter , by 9.5%. Its case is also significant, since it barely has real estate in its portfolio (133 million), since it was one of the groups that suffered the least brick loads during the period of 2009 and 2013.

The rest experienced decreases ranging from 4.5% to close to 7%. BBVA, for example, managed to get rid of 6.9% and reduce the portfolio to 3,600 million. For its part, CaixaBank (including Bankia) was able to reduce those awarded by 6.5%, to 6,000 million.

The absorption of Bankia has increased, yes, its ownership of properties by more than 40%, since, according to the latest figures from the defunct entity, it had 2,500 million properties.

A more relevant effect will have the integration of Liberbank into Unicaja . The Andalusian bank currently has about 1,100 million flats and land, after the 4.5% decline in the first half. This figure will increase to 3,600 million, since the Asturian firm had a portfolio of about 2,500 million , according to last year’s closing data. In fact, Liberbank was the entity with the most brick proportionally to its size.

Cleaning before the blackberry rise
With this cleaning, the sector reaches a new stage, in which it is expected that the entry of real estate will grow soon as a result of the rebound that delinquency will experience, and that the total balance can only be reduced through the sale of lots larger than at present, as has been done in recent years.

All the experts and the banks themselves consider that defaults will register an increase in the coming months, although forecasts suggest that growth will be less intense than initially forecast, when the pandemic broke out.

Vaccination and better economic expectations have allowed estimates to be lowered to an escalation of the default ratio below double digits. It is expected to reach around 7% -8% , compared to the current 4%. At first, ratios of 11% or 12% were glimpsed.

Thanks to the hedging carried out for years, banks can get rid of all this brick burden without having to assume additional losses and even obtain capital gains on endowments, in order to improve operating efficiencies and profitability.

Far are the 100,000 million properties that banks came to treasure on their balance sheets in the last financial crisis, when the Government was forced to create Sareb , the vehicle that served for the entities that were rescued to transfer their repossessed apartments and their credits to the promoter.

Since then, all this amount has been going down. The great decrease occurred between 2018 and 2019, when the main banks sealed the large brick sales operations with different funds .

In all cases, they still hold a minority stake in the companies created with these investors, who wanted to bet on this business by buying the assets at deep discounts.