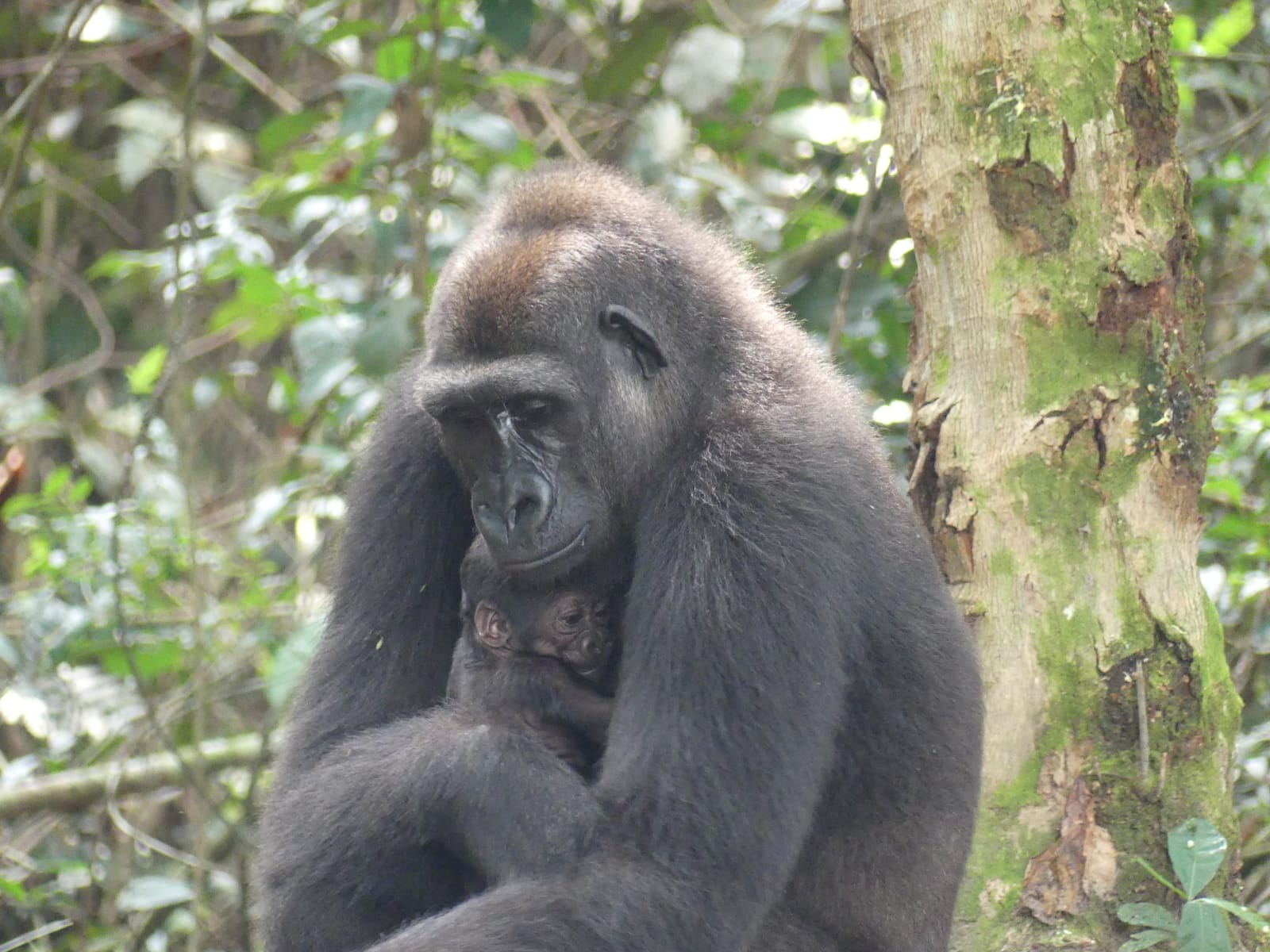 Kent, 28th June 2021 – Conservation history was made today as The Aspinall Foundation announced the first ever birth to captive-born gorillas in the wild, part of the Aspinall Foundation’s ground-breaking gorilla reintroduction project in the Batéké Plateau National Park, Gabon.

The baby western lowland gorilla was born to mother Mayombe (13) and father Djongo (15). The newborn is being regularly monitored by rangers and Mayombe is proving to be a very protective first-time mother.

Father Djongo was born at Port Lympne Reserve in Kent and repatriated to Gabon in 2013. He travelled from the UK with his father Djala, a wild-born orphan who lost his family to poachers and endured mental and physical abuse at the hands of the people who took him. He was rescued by The Aspinall Foundation in 1986.

Mother Mayombe was born at ZooParc de Beauval in Saint-Aignan, France, and repatriated to Gabon in 2019 through a collaboration between The Aspinall Foundation and Beauval.

Damian Aspinall, Chairman, said: “This is a pivotal moment for wildlife conservation and a hugely emotional day for our entire team. This birth symbolises the foundation of our entire Gorilla Protection Project.

“35 years ago, our work saved Djongo’s father and allowed that family lineage to continue after devastating loss. The Aspinall Foundation enabled father and son to be repatriated together to Gabon.

“To now see Djongo’s offspring born in freedom, the next generation of this critically endangered species given a full life in the wild, free from human persecution, is a powerful image in a project that has come full circle.”

Delphine Delord, Associate Director of Communications at ZooParc de Beauval, commented: “The team at Beauval are incredibly excited with this wonderful news. This baby gorilla, offspring of our female Mayombe born in Beauval, represents a huge step for global conservation, of which we are immensely proud.

“Today, we celebrate the fact that hope is possible for a better future for this critically endangered species, thanks to the work being done both ex-situ and in-situ.”

The birth represents not only a hugely significant triumph for conservation, but a deeply moving legacy for grandfather Djala – an emblem of hope emerging from a life of adversity.

The Aspinall Foundation are world leaders in rewilding, having rewilded more than 300 animals. The charity has reintroduced over 70 gorillas back into the wild, including 26 who travelled from its two parks, Port Lympne and Howletts in Kent. Many have formed new family groups and are producing young. In total, more than 35 babies have been born in the wild across the charity’s projects in Congo and Gabon.

Images and camera trap videos of Mayombe, Djongo and their baby are available.

The Aspinall Foundation (TAF) is a UK based charity devoted to the conservation of endangered species and returning them to wild protected areas. TAF’s major conservation projects include the reintroduction of the western lowland gorilla to the Batéké Plateau region of Central Africa, using both wild-born and captive-born release stock, the reinforcement of small isolated gibbon and langur populations in Java, the transfer of eight captive-born, Critically Endangered eastern black rhinoceros to protected reserves in South Africa and Tanzania, and the implementation of a species survival programme for the Critically Endangered greater bamboo lemur in Madagascar.