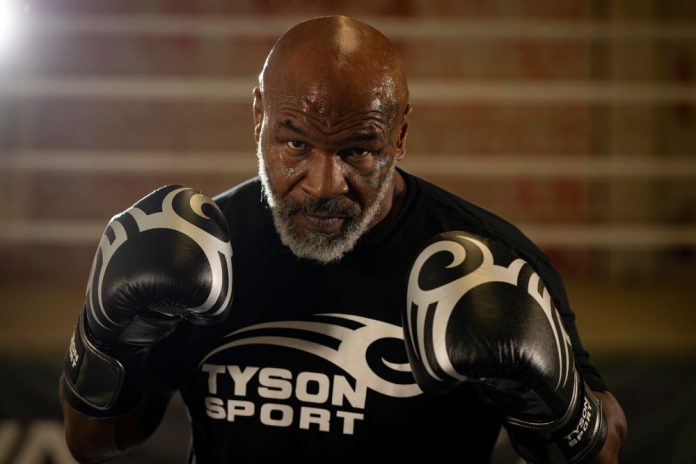 Boxing legend Mike Tyson has revealed how he prepares for fights these days – by taking magic mushrooms and cannabis.
The former heavyweight champion also reckons the drugs would have made him an even more fearsome fighter in his 90s pomp.
In an interview with Muscle and Health Magazine, Tyson spoke about his plans for his Cannabis company Tyson 2.0, revealing he smokes weed every day and even takes mushrooms by the macro dose.
He said: “Cannabis is good to workout on for me.
“I just wish I was smoking back when I was fighting – I really lost out there from an athlete’s perspective.
“[But] if I’d smoked during my boxing career, I probably wouldn’t have been so aggressive.
“I also like taking mushrooms and smoking before fighting. I take psychedelics every day, mushrooms.”

Regaining what was lost
Tyson is perhaps now best known for the controversy that followed his 1997 match with Evander Holyfield.
Contested for the WBA Heavyweight Championship, the match was originally billed as ‘the Sound and the Fury’ – but is better remembered for the shocking moment in the third round when Tyson bit part of Holyfield’s ear off.
At the time, it was considered the end of Tyson’s career and saw him suspended from the sport indefinitely.
But, in the 25 years since, the native New Yorker has been able to parlay the incident into a lucrative business that combines his other love – cannabis.
Tyson is CEO of Tyson 2.0, the cannabis brand for which THC edible ‘Mike Bites’ are the best-seller – edible sweets shaped exactly like Evander Holyfield’s ear.
He said: “I can now regain what I lost because I’ve been so successful with Mike Bites and other ear-related merchandise.
“It’s like making lemon out of lemonade when you think about it, because I got severely fined for the ear bite and all these years later it’s turned into a blessing.
“People see it almost as slapstick comedy.
“I’ve been making hundreds of thousands of dollars just from images of biting people’s ears. It’s just incredible and I’m very grateful. It could have been bad. It could have turned out really bad.”

Turning losses into wins
Tyson’s varied career has also seen him dabble in film, with Hollywood under his belt – and Bollywood next on the hit list.
He said: “I’ve just finished filming Vendetta with Bruce Willis.
“I didn’t have the chance in our movie to interact personally, but we’re good friends.
“I was acting alongside Thomas Jane who played the lead role in The Punisher, I got to play with some really fun guns.
“I’ve also been working on a Bollywood movie. I enjoy being on a stage, I like being on stage. I could even belly dance if someone taught me!”
Editor Danni Levy, who spoke with the boxing star for Muscle and Health Magazine, added: “If ever I was looking for a way to enliven my life, spending an afternoon with Mike Tyson eating THC edibles would probably have been top of my list, albeit a far-fetched notion.
“Tyson’s personality is contagious. He emulates warmth and family charm. His smile makes you smile.
“And it’s easy to see why, 25 years after an event that could’ve ruined his career, he’s flipped the coin and turned mincemeat into millions.
“Sharing an afternoon with Tyson was undoubtedly one of the most memorable moments of my career.”