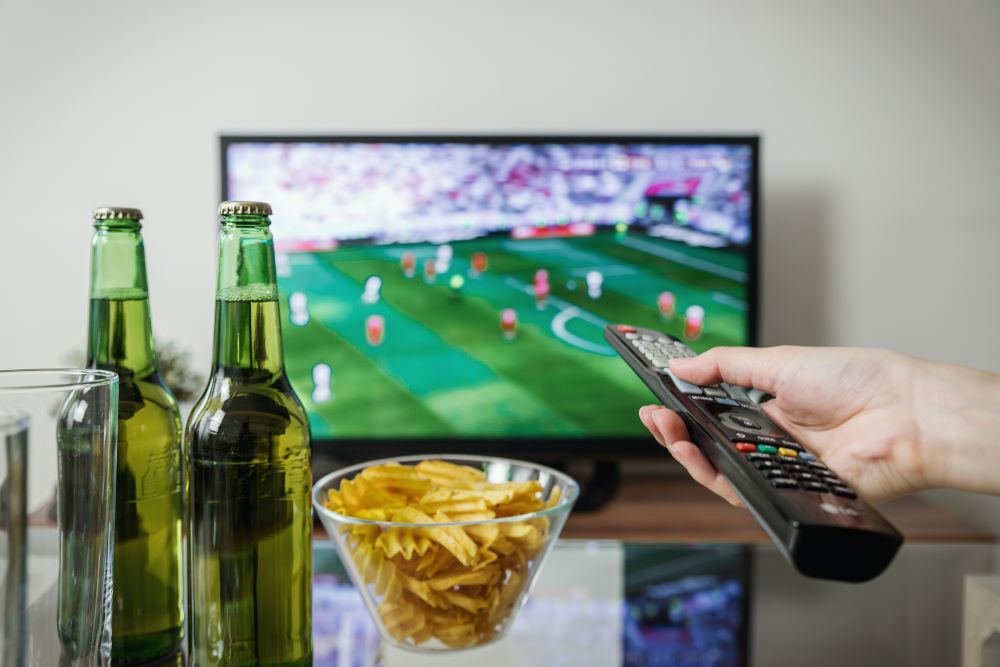 The best things about watching football at home are a guaranteed comfy seat, cheap beer – and actually being able to hear the commentary.
A survey of 2,000 football enthusiasts found 45 per cent prefer watching a match from the comfort of their couch rather than live.
And nearly a quarter find it much easier to concentrate on the game if there are no crowd distractions.
Money also plays a big factor, with 65 per cent expecting to watch most of their football at home this upcoming season rather than at stadiums due to the cost-of-living crisis.
And 55 per cent said their favourite thing about watching football at home was the fact it’s cheaper.
Fans also cited other money saving measures such as not having to pay for travel, food and drink at the match.
Other benefits of watching the action at home include not having to queue for toilets (48 per cent), no heads blocking your view (40 per cent) and being able to watch in your PJs (27 per cent).
Unmatched atmospheres
David Bouchier, chief TV & entertainment officer at Virgin Media O2, which commissioned the study, said: “Live sport is something everyone should experience and the atmosphere is unmatched.
“But watching at home still has its benefits, as our research shows, with many finding it as enjoyable and also helps save money.”
The study also found 26 per cent like not having to worry about fighting traffic to get home from a game by watching it from the comfort of their sofa.
And 21 per cent enjoy being able to pause a live match to go to the loo – without the risk of missing a crucial moment.
For 13 per cent of those who support less successful sides, they appreciate being able to simply change the channel if their team isn’t doing so well.
On average, football fans estimate they will watch 18 games at home next season, compared to just five live in stadiums and five in pubs.
And 31 per cent now watch games while on the move, through phones and tablets, while travelling or commuting.
Uninterrupted experiences
David Bouchier added: “With the new season about to begin, excitement is at fever pitch – it’s nearly time to learn if your team triumph or struggle this year, wherever you watch them.
“It’s clear watching at home can be just as exciting as being there in person, if not even better because it can be a personalised and uninterrupted experience.
“We will be cheapest and most convenient place to watch all of the football action this season so come and join us for what is set to be another great year of live sport.”
It also emerged 55 per cent will ditch all their other plans and activities when the football is on.
While 65 per cent believe their team winning a game has the capacity to turn their whole mood around, according to the OnePoll figures.
But with Premier League matches shared between multiple broadcasters, six in 10 are confused about what TV or broadband provider to choose when it comes to watching the Premier League for the best value.
Top 30 things about watching football at home

Guaranteed to have a comfortable seat
Cheaper to watch at home
You can hear the commentary
Don’t have to queue for the toilets
Perfect view of the screen
Save money on travel expenses
Comfort of your own sofa/bed/chair
No heads blocking the view
Don’t have to interact with anyone if you don’t want to
Can turn the volume up or down as much as you like
Don’t have to get dressed up e.g. can watch in loungewear
Don’t have to pay over the odds for food and drink at home like you would at a stadium
Don’t have to worry about traffic on the way there/back
Fridge full of whatever snacks/beer you want
You can really concentrate on the game
Not having to travel on packed tubes/trains/roads
Can watch it with whoever you want
You actually get some leg room
Reduces the chances of catching Covid
Can pause a game to go to the loo
No rival fans
You can drink beer while watching the match
No beer spillages/ drinks being thrown
Not having to be squashed into a tiny seat
Can order a takeaway if you wish
Can watch with young kids/family members
It’s easier to see tactical changes on the screen
No need for taxis
Being able to switch it off if your team’s losing
You get to watch pundits argue at half time/full time