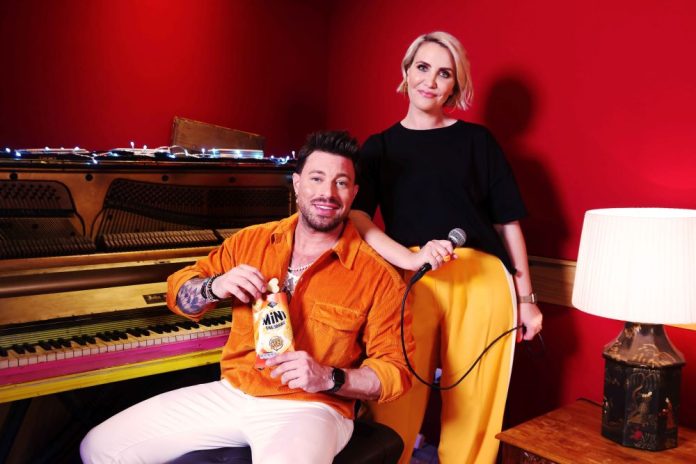 The ultimate wedding playlist has been revealed, and Dancing Queen by Abba has taken the top spot – 46 years after it was first released.
A poll of 2,000 wedding guests saw Don’t Stop Me Now by Queen and Neil Diamond’s Sweet Caroline complete the top three.
The ‘big day’ top 40 playlist also included Happy by Pharrell Williams, Toploader’s Dancing in the Moonlight, and Mr Brightside by The Killers.
Single Ladies by Beyonce, and One Love by Blue also featured.
The research also found 59 per cent love the cheesiness of a wedding playlist, and 21 per cent enjoy nothing more than a good boogie with pals to celebrate someone tying the knot.
Savoury biscuit brand Mini Cheddars, which commissioned the research, has created the ultimate wedding superband, featuring Blue’s Duncan James and Claire Richards from Steps, which will perform for one night only this September.
Leighton Wall, a spokesperson for global snacking company, pladis UK&I said: “Weddings are a great way to let loose, at their heart they are all about happiness.
“Part of this happiness comes from letting go of inhibitions, hitting the dance floor and fully embracing those ‘guilty pleasures’.
“For some reason, showing emotions and being authentically yourself is seen as somewhat cheesy among many – but we say embrace it, not just at weddings but any time you fancy.”

Cheesy moments
The study also found 30 per cent of those polled believe speeches are typically the cheesiest part of any wedding ceremony.
Second on this list was the often-awkward first dance (27 per cent) followed by the music choices (26 per cent).
But more than one in 10 admit they never dance at weddings they attend.
And the age-old question of whether wedding planners should go for a DJ or a live band hasn’t been answered – with Brits split right down the middle on what they prefer.
On the big day, the wedding ceremony itself, including the exchanging of vows, was deemed slightly better than the evening party (24 per cent compared to 22 per cent).
But 15 per cent simply look forward to enjoying the wedding breakfast.
The average adult has attended eight weddings, putting them in a good position to judge how well one has gone – while 10 per cent estimate they’ve been to 15 or more.
And of those who are already married, one in five had a row with their other half about what tunes should go on the all-important evening do playlist.
Blue star Duncan James said: “It can be hard to reach a compromise on music if one person loves heavy metal and the other’s a pop-peddler.
“This is why it’s often best to leave your preconceived notions of what music is ‘good’ at the door, and let a DJ play the biggest crowd pleasers in their record collection.
“There’s a reason many of the songs in this ultimate wedding playlist have been mainstays for decades, they’re timeless classics everyone knows, and Claire and I can’t wait to play a few of ours on one couple’s special day.”
Steps singer Claire Richards said: “To play such an amazing role in one couple’s wedding will be a real honour – I know how important music is at a wedding, and Duncan and I can’t wait to make sure every guest fully embraces that no-care feeling you only get dancing your heart out at a wedding.“
Find out how to have Duncan James and Claire Richards perform at your wedding visit here – the competition closes on Friday 19 August.
Top 40 wedding playlist songs

Dancing Queen by Abba
Don’t Stop Me Now by Queen
Sweet Caroline by Neil Diamond
Happy by Pharrell Williams
Mamma Mia by Abba
Oh What a Night by Frankie Valli
Dancing in the Moonlight by Toploader
Night Fever by the Bee Gees
I Gotta Feeling by the Black Eyed Peas
Don’t Stop Believin’ by Journey
I’m Still Standing by Elton John
Mr Brightside by The Killers
Living on a Prayer by Bon Jovi
Can’t Stop the Feeling by Justin Timberlake
Are You Ready for Love? by Elton John
Let Me Entertain You by Robbie Williams
Signed, Sealed, Delivered by Stevie Wonder
Believe by Cher
How Will I Know by Whitney Houston
Single Ladies by Beyonce
Valerie by Amy Winehouse
One Love by Blue
Blame it on the Boogie by Jackson 5
Reach by S Club 7
Mambo No. 5 by Lou Bega
Sex On Fire by Kings of Leon
American Pie by Don McLean
Proud Mary by Tina Turner
Could It Be Magic by Take that
Hey Jude by The Beatles
Shut up and Dance by Walk the Moon
September by Earth, Wind and Fire
5, 6, 7, 8 by Steps
Thriller by Michael Jackson
Chain Reaction by Steps
Spice Up Your Life by The Spice Girls
99 Red Balloons by Nena
Teenage Dirtbag by Wheatus
All Rise by Blue
C’est la Vie by B’witched