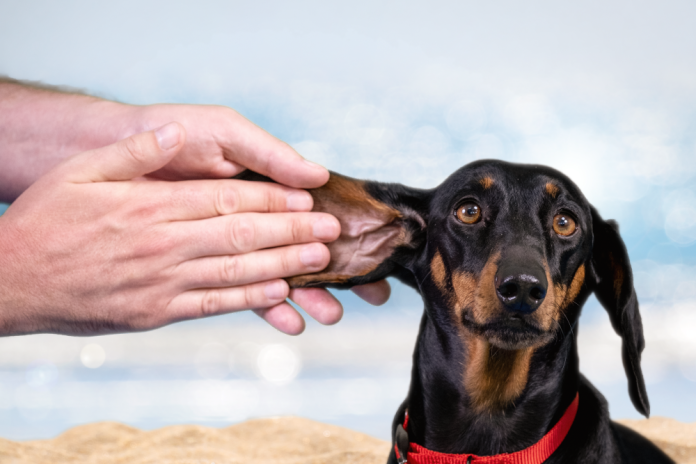 A poll of 2,000 dog owners found 51 per cent are planning to take their pet on a summer staycation this year, with 88 per cent who purchased a pup during the pandemic taking them on their first holiday.
But 46 per cent didn’t realise dogs need sun protection, while 55 per cent weren’t aware of any potential side effects of their dog being sunburnt.
And 70 per cent have no idea how much sunscreen to apply on their dogs.
Worryingly, 57 per cent never apply sunscreen when they take their dogs outdoors, while 40 per cent think it’s fine to use human sunscreen on dogs, despite these often containing chemicals that may be toxic to them.
Following the findings, Hotel booking platform hoo has launched a campaign to encourage dog-parents to slather their prized pets with sunscreen to protect them from the sun’s rays.

Protecting the hotspots
Vet Dr Anna Ewers Clark, veterinary research and standards lead at national pet charity Blue Cross, has highlighted how important it is to get dog owners thinking about keeping their four-legged friends safe in the sun.
She said: “Fur is a really great natural sun protector. But there are areas where they won’t have a lot of fur, and those are the key hotspots we worry about, like their ears and the tip of their nose.
“A lot of dogs’ bellies are sparsely furred. If you have a pet who has a light, very thin coat they are a lot more sensitive to sun damage.
“Plenty of dogs will naturally avoid the sun but not all of them. One of the biggest problems we see is with dogs who like to sunbathe.
“People love to see their pets lying out in the sun, they think it’s so cute.
“But even if it’s not a hot day, we know that temperature isn’t always linked to UV damage.
“If you go walking with your dog and take them to the beach, along cliff tops or even up mountains you don’t often feel the heat from the sun because you have a nice breeze.
“But the reflection off the waves and being higher up can make that risk higher.
“There is often not a lot of shade so your pet is forced to be out in the sun all day which they may love if they’re having a great day running around, but you don’t want them coming back with sunburn.”

Reapplication is important
The study also found that reassuringly, 46 per cent of those surveyed, via OnePoll, are aware of their dogs’ SPF needs, with 21 per cent making sure their pups are suitably protected every time they go outside.
Generation Z – those aged 18-24 – are more conscious of their dogs suncare requirements, with 65 per cent aware that dogs should use SPF or sun protection.
A third claimed that although the importance of putting SPF on their dog is new information to them, they’ll be doing so all the time now.
And a further 28 per cent will do it ‘when they remember’.
Dr Anna Ewers Clark added: “Human sunscreen has a number of additives in them and fragrances which can be an irritant to dogs’ skin, so using a pet-safe sunscreen is the best way forward.
“Make sure you are applying that before going into the sunshine – ideally 15 minutes before giving it a chance to soak in.
“If you’re using SPF 30 on your dog, reapply every 30 to 45 minutes. It’s very difficult to over apply it so if in doubt, put on another layer.
“The minimum safe SPF for dogs is 30. But with any new cream, test it on your dog before you need it.
“One of the things with pets which we don’t have to think about so much with people is making sure they don’t lick it straight off.
“I sometimes recommend that if you have a dog that quite likes a treat or a puzzle feeder, put sunscreen on them and give them the puzzle feeder to distract them for a few minutes while it soaks in because otherwise it will lick it straight off.
“It’s easier to reapply when you’re out because they’re distracted by everything else that’s going on. Reapplication is important so take it with you.
“When you’re putting some on yourself and think it’s getting a bit warm and has been a while since I’ve put it on, make sure you put it on for your pet as well.”
More than three million pet owners
Duncan McKenna, founder of hoo, which is giving away bottles of dog friendly sunscreen for every dog-friendly hotel booking made through the site for the next 2 weeks, said: “More than three million households became pet owners during the pandemic, and many studies have shown how our pooches have got us through a really tough time.
“It’s only right that we take them with us this summer as many will be taking their first real break in two long years.
“It would be terrible for pooches to then not enjoy their time away due to dreaded sunburn that can be avoided. It’s a great way for the family to upgrade their experiences – pups and all.”