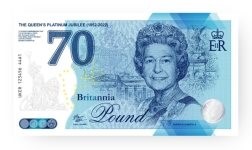 After months of preparation, new Platinum Jubilee £70 banknotes were ready for release on the morning of 8 September. This set of two limited series honours and commemorates the 70th anniversary of Queen Elizabeth II’s accession to the throne.  One Banknote, producers of the exclusive collectors’ banknote brand Britannia Pound, now release the currency in respectful memory of Her Late Majesty.

Several designers collaborated on the distinctive designs for the two series, and the banknotes were produced last month in a high-security currency printing facility. They depict Queen Elizabeth II and incorporate all the standard security features such as UV inks, unique serial numbers, microtext, holographic foil, and banknote engraving.

“These notes will be treasured pieces, commemorating the life and service of one of the most paramount figures in recent history. HM Queen Elizabeth II forged paths and broke down barriers in a male-dominated world. She modernised the monarchy, transformed the Commonwealth, and has been a shining example of true leadership for an astounding 70 years. It is a great honour to offer these notes to the world in our upcoming international auction in New York with the hope they fall into the hands of passionate collectors.”

Each of the two series will be limited to 70,000 of the £70 banknotes. More information and other purchasing options are available on the One Banknote website, www.onebanknote.com.