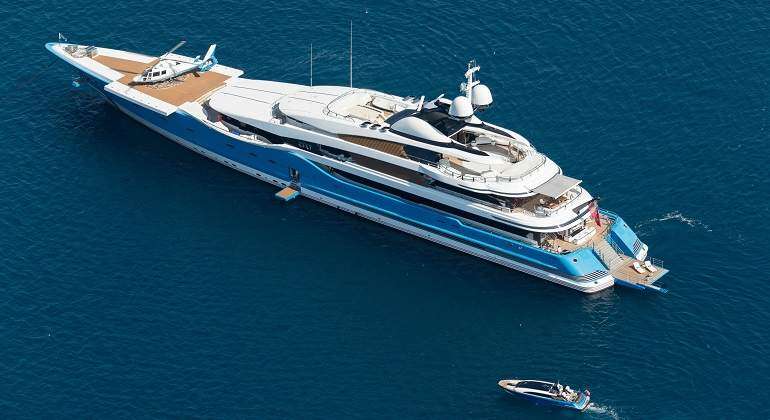 Spain is no longer the favorite destination of international moguls for their summer vacations. The Spanish coasts, which until recently were the undisputed leaders in the number of superyachts , lose another 13 boats this year. Greece , which numbers 90, becomes the main destination for these floating mansions of dozens of meters in length. In this way, the flight of these ships from Spain continues, which only at the beginning of summer lost nine superyachts .

This is demonstrated by the data from the Superyachts country-by-country report , produced each year by Bloomberg and the consulting firm IHS. Spain is relegated to fifth position with 124 superyachts sailing along its coasts. Greece, the new leader, has 194 this summer. They are followed by Italy (171), the United States (170) and France (124).

Position of superyachts in the Mediterranean this summer.
Greece is at the top of Bloomberg’s superyacht rankings for the first time . At the beginning of the summer, it received 80 more boats in a single month due to the tourist seasons of the Mediterranean, the Aegean and the Adriatic. They reached their highest presence in early summer, despite the Covid pandemic.

International stars like the Richie family, basketball legend Magic Johnson and Australian mogul James Packer are among the celebrities seen on yachts in Greece this summer, while boats reportedly owned by other billionaires like American producer David Geffen, the Emirati Abdullah al Futtaim and Italian-Swiss magnate Ernesto Bertarelli were anchored off the coast, according to data from ships analyzed by radar.

In recent months, according to various local media, the 459-foot ship Scheherazade sailed through Turkey. The owner of this great yacht is a mystery. However, several specialists attribute it to a Middle Eastern tycoon or a member of the Gulf monarchies .

On the other hand, the 325-foot Madame Gu – whose ownership is attributed to Andrey Skoch, a Russian steel magnate who owns the Lebedinsky Mining company – has also been seen off the Turkish coast . In addition, the 280-foot Pacific vessel of Russia’s second-richest man, Leonid Mikhelson, has also dropped anchor off the country’s coast since last year.

However, this summer Abramovich is on its premiere. The Lloyd Werft shipyard in Bremerhaven (Germany) delivered to the Russian tycoon his new yacht, the Solaris . This new 140-meter long floating mansion has the capacity to host up to 36 VIP guests, throughout its 48 cabins , and has a permanent crew of 60 people.

Greece battled the outbreaks in November 2020 and then in March and April this year. It was reopened to foreign tourists on May 14, with no quarantine required. Visitors have to provide a vaccination certificate or proof of a negative Covid test.

That is, if they get off the boat. German Chancellor Angela Merkel and French President Emmanuel Macron recently criticized Greece and other tourism-dependent nations for freely accepting visitors who have been inoculated with less effective Chinese and Russian vaccines.