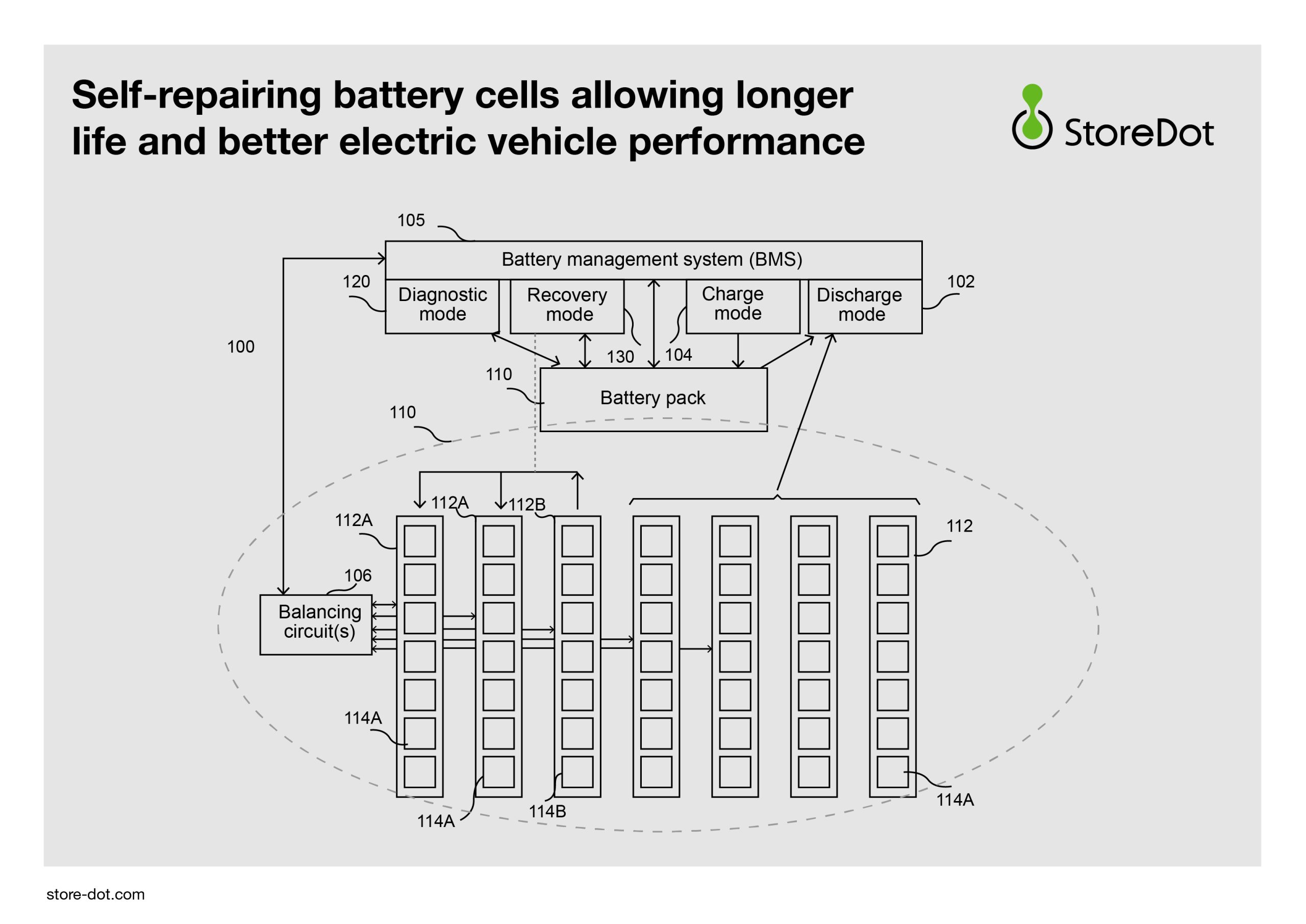 StoreDot, the pioneer of extreme fast charging (XFC) battery technology for electric vehicles (EVs), has revealed new patented technology that will allow battery cells to regenerate while they are in use, through a seamless background repair mechanism.

The newly developed system includes a suite of software algorithms with corresponding hardware, furthering StoreDot’s leadership in advancing the entire battery ecosystem. The self-repairing system identifies a cell or string of cells that are underperforming or overheating, temporarily disabling them in order to proactively recondition them back to 100% performance, without the driver experiencing any driving interruption or loss of performance in their electric vehicle. This advancement of a ‘self-healing’ approach to electric vehicles will play a major role in prolonging battery life and driving range, as well as improving safety by preventing overheating or any danger of thermal runaway.

A recent granted global patent, ‘Recovering defective branches and/or cells of battery packs by deep discharges’, covers the novel method of how this innovation should be implemented in various EV battery pack scenarios, while the vehicle is either charging, resting or driving.

Dr Doron Myersdorf, StoreDot CEO “It’s important for us at StoreDot to encourage the global uptake of electric vehicles, so that we can all live in a cleaner, zero-emissions world. Alongside the development of our leading silicon-dominant XFC cells, StoreDot is committed to broadening its portfolio to advance the entire battery eco-system. This latest patented technology is a unique way of repairing individual cells, or groups or cells, when they are in operation is a novel advancement to self-repairing electric vehicles. This approach is truly transformative with huge real-world benefits for electric vehicle owners, improving performance, safety and the longevity of their vehicles. It also plays a crucial role in eradicating range-anxiety, which remains the main barrier to electric vehicle ownership.”

This self-repairing cells system is the latest in a string of StoreDot innovations, designed to benefit the entire battery ecosystem. The company recently had patents granted for technologies that deliver electric vehicles a constant range throughout the life of their vehicles, as the battery deteriorates. It has also made available, through open-source, hardware, and software advancements of a ‘booster’ technology that allows cells to receive a higher charging current, giving faster charging times even in limited charging infrastructure scenarios.

These sit alongside StoreDot’s rapid advancement in extreme fast charging lithium-ion batteries for use in the automotive sector. The Company is in advanced talks with leading global car makers and remains firmly on track to deliver volumes of XFC batteries, which provide a 50% reduction in charging time at the same cost, by 2024. The Company demonstrates a clear technology roadmap where it is already working on its next generation XED, extreme energy density solid state cells with planned mass production in 2028.