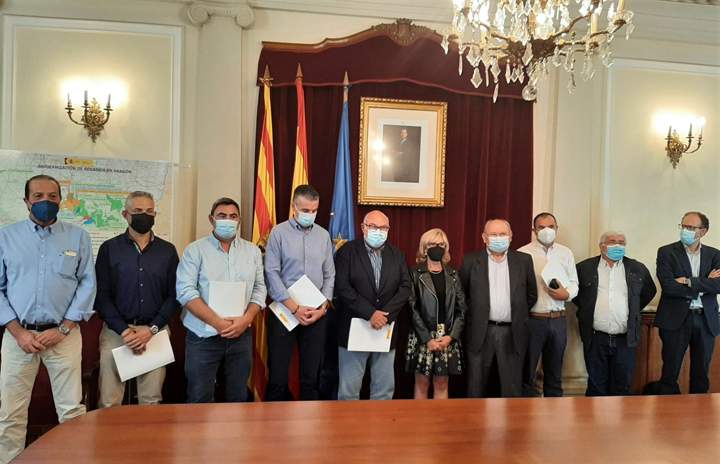 The Ministry of Agriculture, Fisheries and Food, through the public instrumental company Seiasa -Society Mercantil Estatal de Infraestructuras Agrarias-, has signed four agreements this Thursday in Huesca by which it will finance irrigation modernization works in the province of Huesca worth 82,086,835 euros.

The actions will jointly affect 12,745 hectares dedicated mainly to corn, alfalfa and winter cereal crops and will benefit 1,424 irrigators.

The signing ceremony was also attended by the sub-delegate of the Government in Huesca, Silvia Salazar Altemir, the general director of Rural Development of the Government of Aragon, Jesús Nogués Navarro and the president of Riegos del Alto Aragón, César Trillo Guardia, a system to which the signatory communities of the agreements.

Collarada
The “Regulatory Agreement for the financing, construction and exploitation of the irrigation modernization works of the Community of Irrigators Collarada 1st Section (Huesca)” will allow financing actions worth 24,986,500 euros with the aim of transforming a deteriorated system of blanket irrigation using concrete gutters and ditches in a pressurized irrigation system using buried pipes.

The actions, which will benefit a total of 350 irrigators, contemplate dividing the irrigable area, of 2,909 hectares distributed in the municipalities of Robres, Almuniente and Senés de Alcubierre, into two areas.

Each one will have an intake in the Monegros Canal, a regulation basin, a pumping station, another elevated basin and two photovoltaic solar parks. The distribution pipe network will be completed with an irrigation remote control system.

Saint Ana
The “Regulatory Agreement for the financing, construction and exploitation of irrigation modernization works in the Irrigation Community of Santa Ana (Huesca)”, worth 24,708,635 euros, will allow the comprehensive modernization of the area irrigable, replacing the deteriorated existing network of ditches and canals with a new and efficient pressure irrigation system using pipes.

The planned actions include the execution of an intake work in the Monegros Canal, a regulation basin, a pumping station and two elevated basins. All this will be completed with the network of pipes to the plot, a remote control system for irrigation and a photovoltaic solar park.

The works will affect 2,654 hectares in the municipalities of Almuniente, Senés de Alcubierre, Tardienta, Torralba de Aragón and Torres de Barbúes, and will benefit 273 irrigators.

Grañén-Flumen
The actions that are the object of the “Regulatory Agreement for the financing, construction and exploitation of the modernization works of the irrigation of the Community of Regantes Grañén-Flumen and Almuniente (Huesca). Remaining Phases”, worth 21,864,700 euros, will affect 3,539 hectares in the municipalities of Grañén and Almuniente, and will benefit 450 irrigators.

The works will involve the comprehensive modernization of the irrigable area, with the replacement of the currently existing foot irrigation system with a pressure irrigation system. The execution of a complete network of pipes, regulation ponds, a pumping station, tertiary networks, electrical connection and an irrigation remote control system is also contemplated.

Molinar del Flumen
The “Regulatory Agreement for the financing, construction and exploitation of the irrigation modernization works of the Molinar del Flumen Irrigation Community (Huesca). Phase III”, is endowed with 10,527,000 euros and will enable the execution of a pond of elevation domain that will complete the rest of the actions carried out previously in the irrigated area of ​​this community of irrigators, improving the energy optimization of the system.

The new infrastructures will affect an area of ​​3,643 hectares in the municipalities of Almudévar, Tardienta and Sangarrén and will benefit 351 irrigators.

Recovery plan
On the other hand, the Ministry of Agriculture, Fisheries and Food is going to promote, also through the public instrumental company Seiasa, two irrigation modernization projects in Huesca and Zaragoza within the framework of the “Plan to improve efficiency and sustainability in irrigation “of the Recovery, Transformation and Resilience Plan of the Spanish Economy, phase I.

To this end, the president of Seiasa held a working meeting in Zaragoza this Wednesday with representatives of the irrigation communities that are the object of the actions, to initiate the necessary steps to start up these modernization works.

Both projects are aimed at improving energy and water efficiency, as well as the structural modernization of irrigation systems, for a total value of 35,510,000 euros – VAT not included.

The “Project for a pumping station station, electrical project and remote control system for energy efficiency in the irrigable area on the right bank of the Flumen River in the Molinar del Flumen Irrigation Community (Huesca)”, will have 9,010,000 euros –VAT not included–.

The investments of the “Plan for the improvement of efficiency and sustainability in irrigation” have a public-private nature. The contribution of the Recovery, Transformation and Resilience Plan will be a maximum of 80 percent of the cost of eligible expenses, while the communities of irrigators and users that are the object of the action will contribute the rest.

In Aragon, the Ministry of Agriculture, Fisheries and Food, through Seiasa, has completed a total of 38 irrigation modernization actions, of which 36 have been completed, assuming an investment of 272.9 million euros, acting on a irrigated area of ​​63,659 hectares and benefiting 7,063 irrigators.