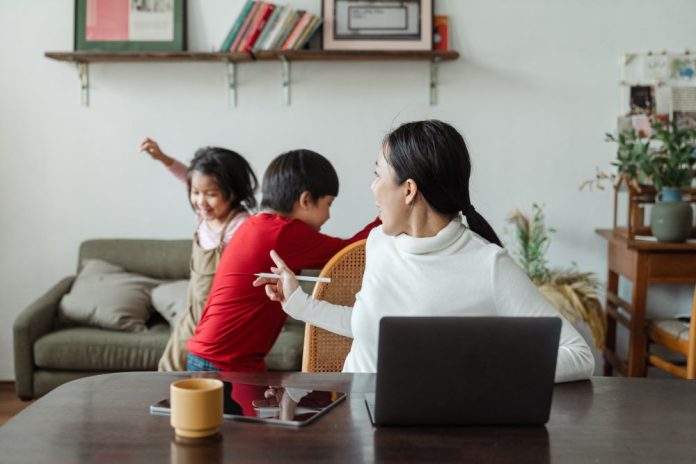 The average parent has to deal with six ‘family crises’ a day – including resolving sibling squabbles, dealing with tantrums and running late to appointments.
A poll of 1,000 mums and dad of children aged 0-16 found disagreements over bedtime (17 per cent) and struggling to understand their youngster’s homework (17 per cent) are also among the daily conundrums they find themselves in.
Leaving the house without snacks in tow (15 per cent), rescuing beloved toys or comforters (15 per cent), and losing internet connectivity when watching a child’s favourite show (15 per cent) also emerged among the top 10 little ‘everyday emergencies’.
It also emerged 88 per cent of parents turn to tech to help solve these continuous challenges.
Vodafone commissioned the research in recognition of its network being relied upon by the 77 per cent of emergency services who have connectivity contracts with the provider.
Parents turn to tech to manage family tiffs
The study also found when solving these everyday problems, 38 per cent will use their smartphone for assistance, while 32 per cent phone friends or family members.
And 28 per cent seek advice from a voice-controlled person assistant such as Amazon Alexa, or WhatsApp groups with other parents.
In fact, mums and dads turn to tech to manage five out of six of these little ‘everyday emergencies’ in a 24-hour-period.
And when a child turns three emerged as the peak time where turning to tech is most common.
At this point, parents laud technology solutions such as apps that help them keep in touch with their child’s school or nursery (33 per cent), online booking platforms to arrange medical appointments for children (26 per cent) and online shopping apps (22 per cent).
Cool, calm and collected
It also emerged keeping children entertained (44 per cent), helping out with homework (40 per cent) and cooking meals for the family (31 per cent), are the moments parents of children any age up to 16 would find most difficult without tech.
And 37 per cent of those surveyed, via OnePoll, said becoming a parent has shown them how much they need reliable connectivity whether they’re at home or out and about.
While 31 per cent said it is now much more important to them now than it was before they were a parent.
More than nine in 10 (91 per cent) are also now using tech to help them navigate the cost-of-living crisis, by searching for discounts online (48 per cent) using online loyalty schemes (47 per cent) or price comparison apps (38 per cent).
Vodafone’s spokesperson said: “From a real-life emergency through to an ‘everyday emergency’ that most families know are only too common, our network can help families and emergency staff alike feel cool, calm and connected.”
The 10 most common family ‘everyday emergencies’
1.    Child falling over and grazing themselves (21 per cent)
2.    Resolving sibling squabbles (18 per cent)
3.    Dealing with a child’s tantrums (17 per cent)
4.    Running late to an appointment (17 per cent)
5.    Disagreements about bedtime (17 per cent)
6.    Struggling to understand a child’s homework (17 per cent)
7.    Not knowing the answer to a question and googling to find out (16 per cent)
8.    Realising you don’t have snacks having left the house (15 per cent)
9.    Rescuing a lost favourite toy or comforter (15 per cent)
10.   Losing internet connectivity when watching a child’s favourite show (15 per cent