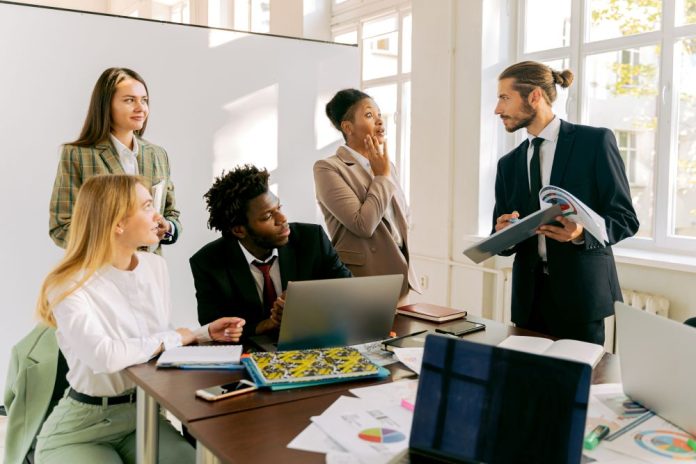 A tool has been developed to help fed up workers deal with their colleagues’ annoying behaviour in the workplace.

The ‘passive aggressive sign generator’ allows disgruntled staff to select from a range of ready-made signs to stick up around their office to communicate their disdain.

And if their grumble is more niche, users can input a specific message to ward off irritating colleagues and ensure they are heard loud and clear.

It was created by The Workplace Depot, after a poll of 2,000 workers found arduous IT issues, smelly toilets and rotten food in the fridge are the biggest office gripes.

Many also loathe the lack of natural light, colleagues sucking up to the boss, and people rambling on about their weekend plans – even though they don’t care.

But 39 per cent have been quick to make their feelings known by either leaving a passive-aggressive note or sending an office-wide email.

The last people leaving and not locking up properly, cigarette butts scattered outside and a mess in the communal lunch areas are the top reasons why workers feel compelled to call out their peers.

And 32 per cent have done so due to their colleague’s poor parking.

While half reported their messages were successful in stopping what they deem to be poor office etiquette, 44 per cent claimed the problems still persisted.

A spokesperson for the industrial supplies provider said: “Offices can often be a funny old environment when social norms don’t always translate into those four walls where we spend much of our lives.

“And when forced to encounter a multitude of small bothers on an almost daily basis, it is no surprise it drives many to snap.

“The way many choose to express their displeasure is in the quintessentially British form of the painfully polite passive-aggressive note or email.

“Yet, these will always have a serious undertone of hostility, which for the reader – or even worse, the culprit – can be quite alarming. Although, often rather amusing too.”
Addressing the issues
The study also found 45 per cent have confronted a colleague about their poor conduct in the workplace, with 46 per cent of these claiming this intervention caused them to stop.

However, eight per cent overstepped the mark and even received disciplinary action following the quarrel.

While 37 per cent have considered leaving their job because of their office bugbears, with 14 per cent actually making the leap to a new role.

Unfortunately, the grass wasn’t always greener as 44 per cent claimed their new place of work was about the same or even worse than what they had left behind.

Getting their work finished at breakneck speeds so they can leave promptly ranked as the most common way workers counteract their annoyances.

While 37 per cent rarely engage with their colleagues to avoid irritations, and 30 per cent will just dodge the office as much as possible.

And 27 per cent will simply plug their headphones in to drown out the noise and irritations of the office.

In fact, 40 per cent even admitted they are less productive when they are in the office because of what is winding them up, according to the survey conducted via OnePoll.

The spokesperson for The Workplace Depot added: “It’s clear from these findings many of the UK’s white-collar workers are pretty fed-up with what is going on around them between 9 and 5.

“But like many things in life, if you don’t address the problem, it will only get worse.

“It is important for these workers to stand up for what they believe is the right conduct for an office – even if that is hiding behind a passive-aggressive note.”
Top 50 office gripes
1. IT issues
2. Computers being slow
3. People speaking loudly
4. People who have conversations right behind your desk
5. People who leave dirty dishes in the work sink
6. When someone calls in sick when you know they aren’t ill
7. Smelly toilets
8. Printers breaking down
9. People coming into work when ill
10. People who take things from your desk without asking
11. People not cleaning the microwave when their food spills
12. Computers crashing
13. Filthy toilets
14. Not being able to wear comfy clothes
15. Someone sucking up to the boss
16. Having to talk to people about their weekends/plans even though you don’t care
17. People who get too close when talking to you
18. Food left in the fridge which is past its use-by date
19. Someone cooking smelly food at lunch
20. The phone ringing constantly
21. Grubby fingers on shared keyboards/mouse if hot desking
22. The temperature always being too hot
23. People who open the windows without checking with people nearby
24. Someone taking my chair while I am away from my desk
25. Hardly any natural light
26. The temperature always being too cold
27. Having to sit in small meeting rooms with lots of people
28. People ‘spreading out’ their desks onto yours
29. People who send passive aggressive emails to the entire office
30.  Hotdesking
31.  People not putting a new toilet roll on the holder
32.  People leaving half eaten food in the fridge/kitchen
33.  Not being able to listen to music
34.  People who hang up the phone without saying goodbye
35.  People who print reams of paper from the printer
36.  Lights left on in rooms unnecessarily
37.  Not being able to have daytime TV on in the background
38.  People who start a phone conversation without any pleasantries first
39.  People bragging about how well their work is going
40.  There never being any parking spaces
41.  People who sing or whistle without realising it
42.  No greenery, like plants
43.  Lunch dishes left lying around on desks
44. People putting food in bins right next to your desk
45. Empty milk cartons left in the fridge
46. Personal belongings left to gather dust on desks
47.  No one ever saying thank you
48.  Lack of amenities / kitchen facilities
49.  No recycling bins
50.  People who now refuse to be part of the tea round