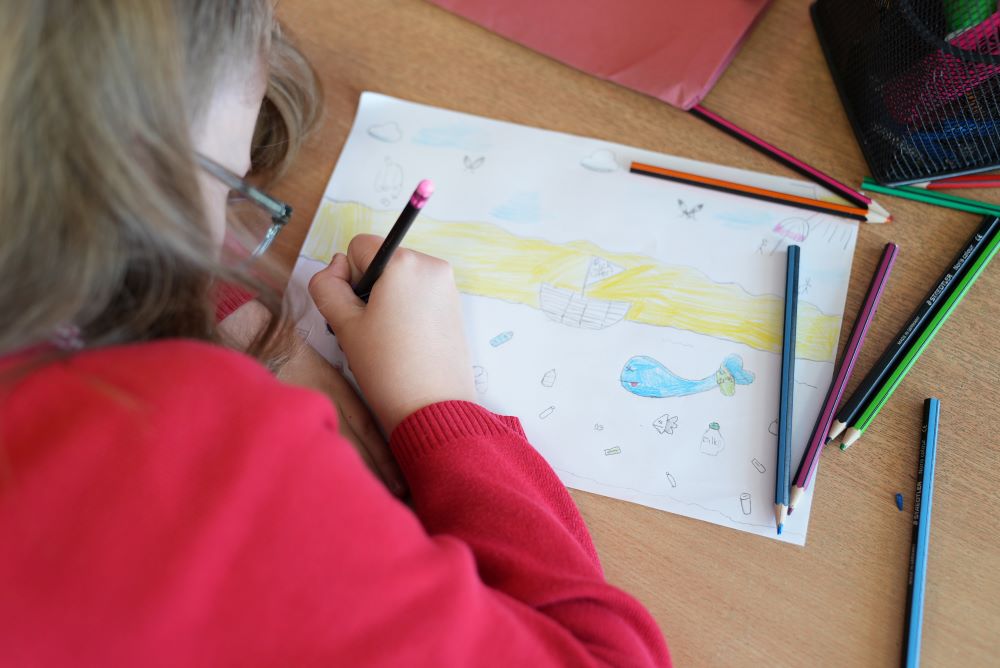 School children were invited to draw pictures showing what they think the world’s oceans would look like in the year 2070, and they make for disheartening viewing.
Youngsters filled the images with plastic and rubbish, as well as creatures consuming the waste in the sea.
It comes after research of 1,091 children aged 7-11 found six in 10 are ‘worried’ about the future of the ocean and 58 per cent want to do more to protect the planet.
And two thirds (62 per cent) of those who are worried about the ocean are scared fish will die out if we don’t do anything to save our seas and a further 52 per cent are frightened whales will fall ill.
The research was commissioned by BRITA in collaboration with Whale and Dolphin Conservation (WDC) to launch Dougie Poynter’s newest children’s book, The Whale Watchers.
The book is set to educate children on the importance of whales to the ecosystem, and show small steps everyone can take to help – such as reducing single-use plastic.

Taking care of the environment
Other top concerns shared by children are the ocean flooding us (51 per cent) and not being able to see a certain species before they die (46 per cent).
And youngsters are already highlighting the changes they want to see to save the seas and the planet – with 54 per cent saying we should stop dumping waste into our waters.
Others think we should make electricity from wind and water (41 per cent) and learn about the importance of the underwater ecosystem in school (39 per cent).
Furthermore 59 per cent are worried about plastic pollution affecting whales.
This comes as 85 per cent believe the giant underwater mammals are important to the ocean’s ecosystem.
Stopping use of single use bottles, taking part in beach cleans and reusing plastic items are among the ways the kids think they can save the whales from plastic pollution.
Musician and children’s author Dougie said: “It’s great to see so many children want to be like Finn, which is character I really relate to. Finn gets quite down about the plastic pollution problem, which I do too and need a little picking up every now and again like he does. But it’s the small stories of triumph and helping to guide change which really restore my faith.
“I wrote this book because I really wanted to create a fictional story with facts that the reader could absorb, learn and carry them on into the rest of their lives as that’s how I learnt about the natural environment when I was growing up, and I hope this story will inspire the future change makers of this earth.”

The next generation wants change
The survey also found those who are worried about the ocean think it will be an average of 26 years before it’s too late to save the sea from permanent damage.
With half feeling frustrated that they can’t do more to help the planet.
The feelings of concern are further validated as children reveal that they have found plastic bags (59 per cent), plastic bottles (57 per cent) and food packaging (48) when visiting the beach.
But encouragingly 63 per cent have learned about climate change, 35 per cent in school and 23 per cent online.
And one in 10 have even learned about the issues in a fictional story book.
Children are most likely to chat to their parents about climate change and 42 per cent have asked them to recycle more, use less plastic (40 per cent) and take reusable bags shopping (38 per cent).
A third even want their parents to change what they eat, according to the OnePoll data.
Rebecca Widdowson, a spokesperson for BRITA UK added: “We are really passionate about reducing single-use plastics and supporting a more sustainable reuse culture, so it’s encouraging to see so many children are learning about climate change in school.
“We want to continue to inspire children in a meaningful and engaging way and to raise funds for our long-standing charity partner WDC and support them in their vital work to protect the oceans for generations to come.”