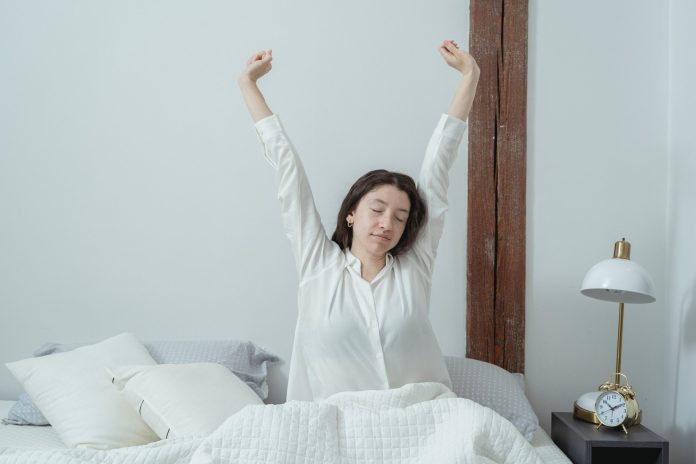 By Livy Beaner // SWNS
NEWS COPY W/ VIDEO + INFOGRAPHIC
Hitting the snooze button doesn’t make you lazy – instead, it may help your social life, new research suggests.
In a poll of 2,000 adults, about one-quarter (24%) typically snooze their alarms because it helps their relationships with family, friends and co-workers.
Six in 10 claim getting more sleep helps them have a better relationship with their partner.
Furthermore, 71% said the amount of sleep they get directly impacts their social health.
The average American sets four different alarms to wake up on a normal day. About one in 10 of those surveyed don’t set an alarm.
Thirty-two percent of non-alarm clockers eat breakfast every day of the week, compared to only 7% of those who set about nine to 10 alarms.
The poll, conducted by OnePoll on behalf of Dave’s Killer Bread, also uncovered that a midweek slump is worse than a case of the Mondays.

People are most likely to hit “snooze” on Wednesday (40%), while only 28% are likely to do so on Monday.
Respondents were also twice as likely to hit snooze on Saturday than Sunday, 20% vs. 9% respectively.
Half also tend to use the snooze button more at the beginning of the week than at the end.
Overall, 72% of respondents snooze between one and four separate times on any given morning, and 16% avoid snoozing it all together.
Regardless, two-thirds admitted that snoozing their alarm is part of their morning routine.
In order to stay in bed a little longer, respondents said they would hypothetically give up eating breakfast (29%), taking a shower (29%) and brushing their teeth (27%).
One-third would even give up using knives and spoons if it meant they’d get an extra hour of sleep each day.
Another three in 10 would also be willing to wear their most uncomfortable shoes for an entire week for extra time in bed.
“Not only are people willing to give up food and basic hygiene for extra sleep, they are noticing how it affects their relationships and their own well-being,” said Cristina Watson, Brand Manager at Dave’s Killer Bread. “Hitting ‘snooze’ doesn’t make you lazy, it is a sign of self-awareness.”
More than eight in 10 (81%) said the amount of sleep they get directly correlates with their physical health. About seven in 10 (72%) said the same about their mental health.
One in five respondents typically snooze their alarm because it’ll improve their mental health.
“It just makes me feel like I’ve had more rest which helps my mental state for that day,” one respondent said.
Social, physical, and mental health aside, 63% said staying in bed a little longer in the morning makes them happier.
“This study shows how important it is to get quality sleep each night, and how taking that little bit of extra time to stay in bed each morning is a necessity,” said Watson. “Having a routine that makes that possible, with a quick-and-easy morning breakfast ready to go, can make all the difference when it comes to sleep habits.”

WHAT WOULD AMERICANS DO FOR AN EXTRA HOUR OF SLEEP?