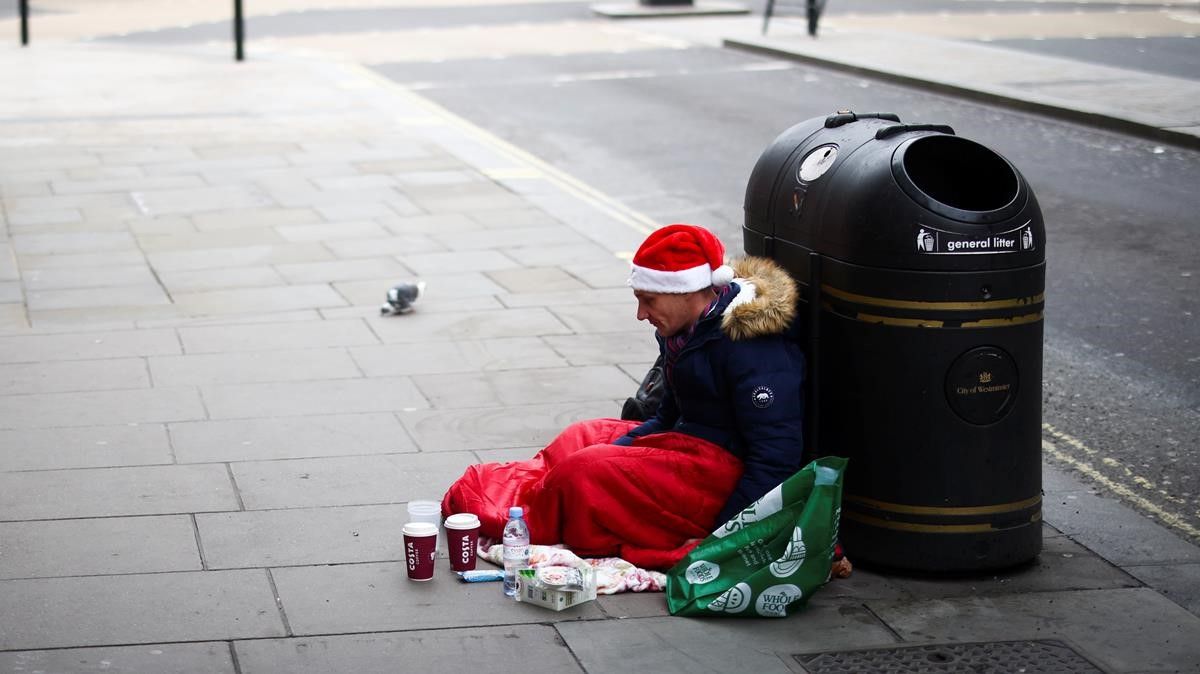 “I do not want to die of covid!”, Exclaims Mac, ready to get vaccinated immediately despite being 25 years old, in the framework of the massive campaign deployed in the United Kingdom, which has put the homeless among the priority groups .

Homeless since the age of 18, this young Englishman who hides his long blonde curls under the hood of a sports sweatshirt received the offer at the night shelter where he now sleeps.

It is one of the temporary lodgings visited by Dr. Alex Fitzgerald-Barron in Winchester , southern England , in an effort to get the vaccine to these “high-risk patients . ” Their immune systems are depressed by a combination of diseases, he says, listing “psychological disorders, frequent pneumonias, dental and dermatological infections” or “high risk of hepatitis C if they inject drugs.”

“If they catch the covid they are much more likely to end up in hospital and die , even if they are young,” says the doctor interviewed by the France Press news agency.

In the United Kingdom, the worst hit country in Europe with almost 127,000 deaths , the government recently included the homeless among the priority groups for vaccination in a massive campaign that has already reached 30 million people. ”

It is very important that no one is left behind , ” said Health Minister , Matt Hancock , who promised to include all migrants regardless of their legal status, making the announcement in mid-March. But Fitzgerald-Barron, like a handful of other doctors, had started earlier, using his “medical judgment” to classify them as ” extremely vulnerable, ” one of the first groups inoculated.

Portable fridge
While others use mobile clinics in small ambulances, this doctor is enough with a small refrigerator that he plugs into his car. In it, load the daily doses in the morning. And when he arrives at a shelter, he plugs the refrigerator back into the wall, ready to receive these patients who are so ” difficult to locate that it is necessary to go through the charitable associations that already have contact with them.”

“If I hadn’t been in the overnight shelter , they wouldn’t have offered me the vaccine,” says Mac .

Capital of England between the 9th and 12th centuries, famous for its Gothic cathedral and the elite boarding school for boys Winchester College, Winchester, with 40,000 inhabitants, is located in a rural setting. “I know people who live in tents in the fields that they will never find,” adds this young man with a thin beard and a lively blue gaze who talks at full speed.

In January, Fitzgerald-Barron located 114 people of whom 74 agreed to be vaccinated, which it considers “a good result ” achieved thanks to a “relationship of personal trust .” “I had to go where they were to explain what it was,” he says, sure that if they had received a simple written message, no one would have asked for an appointment due to suspicion of the system.

This is the case of Leighan , 35, who declined the invitation. “I think this is all a great conspiracy to control the population,” he says while eating spaghetti and tomato at the Trinity Shelter , a Winchester association that helps the homeless.

Back to the street
When the pandemic began a year ago, the British Government asked municipalities to house all people who slept on the street , even in hotels. Since then it claims to have invested 700 million pounds ($ 965 million) and accommodated 37,000 people .

But at the end of the first lockdown in June, “we saw that some municipalities continued to help but others did not and some people were denied support, ” says Jasmine Basran of the Crisis association , which works with the homeless nationwide.

Throughout the pandemic, Mac has spent a single month in a hotel . “It was incredible, he had a beautiful room, it was like living a normal life , he worked harder because he had a solid foundation,” he says, explaining that he usually works as a gardener.

But then ” you go back to the street or to the night shelter surrounded by drug addicts ” and “it is to go back”, he says, regretting not receiving permanent accommodation despite having requested it several times: “I do not take drugs, I do not drink, I work, why not ? ”

Basran insists that the government “has yet to establish its strategy after ” the current lockdown. And Fitzgerald-Barron fears that when he returns to shelters for the second dose of the vaccine in April “some of the people are no longer there.”