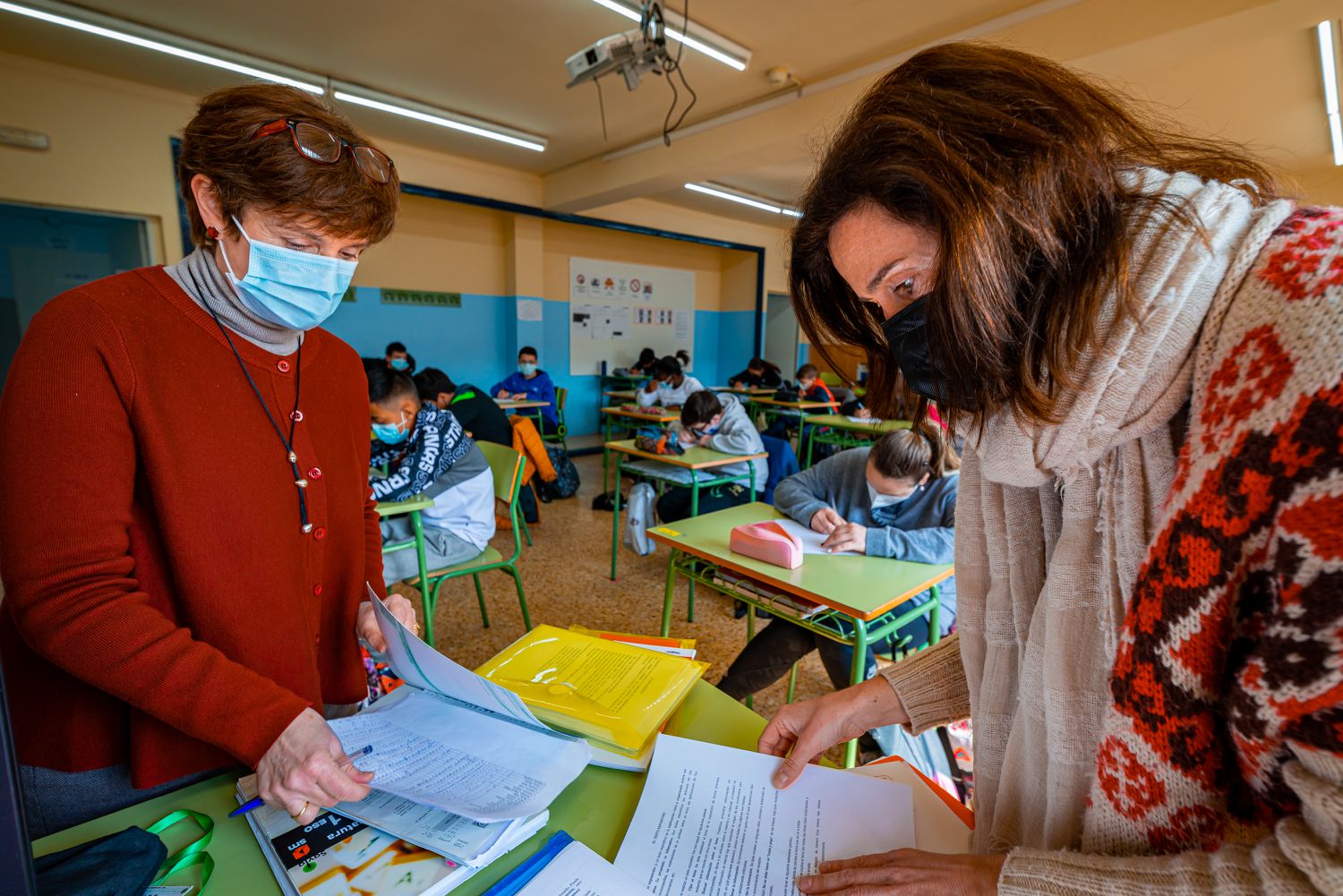 Aimar is very focused on writing a letter to himself. “He will open it in June and see if what is being told has been accomplished,” says his teacher, María Ruiz, before leaning towards the seven-year-old boy and asking him to read it.

“This afternoon is the photo of the training with Osasuna … and my tooth is moving.” The classroom in which Aimar writes, spacious, welcoming, very peaceful considering that it houses 20 first and second grade students, decorated with drawings and with numerous windows through which trees and the Arga River can be seen, it also looks like a classroom of the future.

At the other end of the class, a second teacher, María Martínez, is helping Dina to read a sentence from the language book. “Look at the picture,” he says, pointing to a crying squirrel. The children are sitting two by two.

Each pair has received a piece of paper explaining the activity they have to carry out, which basically consists of reading, writing or playing to describe the pictures that appear on a picture for the partner to guess. All the students are doing something. The atmosphere is both industrious and relaxed.

The Doña Álvara Álvarez de Falces public school, a town of 2,336 students located in the south of Navarra, in which 39% of the students have immigrant parents, most of them Maghreb who work in industry and canning plants in the area, works with teaching shared, that is, with two teachers simultaneously in the classroom.

Unlike what happens in other developed countries, until very recently it was rare to see the formula in the Spanish public educational network,except for the cases in which a reinforcement teacher entered the classroom with the mission of specifically helping students with special needs, not of working with the entire classroom.

But this course is producing an acceleration of the model with the programs that various autonomies, such as Navarra (110 centers), Valencian Community (80), Castilla-La Mancha and the Balearic Islands (which do not give a figure) are implementing in ordinary classrooms, largely thanks to the extraordinary injection of funds they have received from the Government for education due to the pandemic.

In other territories, such as Aragon and Catalonia, similar initiatives are also being developed in the form of projects by educational centers.

The great drop in students that is already changing the school
Several professors who are testing the system agree with the experts who have studied the so-called codocence in that it initially raises doubts as they are used to working on their own. But in general, a short time later the change convinces them: solitary work becomes teamwork, their stress is reduced, learning becomes more active, and attention to students and behavior in the classroom improve.

The main obstacle is cost. But this, say the supporters of the formula, is relative: once they know it, given the choice, they prefer to have more students in class with two teachers than half with just one.

“It gives us the opportunity,” says María Martínez in her class at Falces school, “to spend time with them individually, for example with literacy, which is the hardest thing for them in this cycle. If we were only one at 20, it would be like stretching a very long rope that not everyone can get hooked on ”.

“Co-teaching, for me, allows you to make the protagonist the student, and that each one advances at their own pace, both the one who needs the most help and the one who can go ahead,” continues in the same classroom David Ruiz, head of studies at the Doña Álvara Álvarez school, where 80% of the classes have two teachers.

“There are students who do not understand the brief explanation of the activity, and then one of the teachers approaches and focuses on telling them how to do it. And on the other hand, there are others who do not need more than the first explanation, or for whom it is even enough to give it in writing ”.

A few hours later, in Ejea de los Caballeros (Zaragoza), Eva Bajén, a language teacher and director of the Cinco Villas public institute, climbs the stairs to teach a group from the first year of ESO. “In general, the behavior of the students is very good when they are co-educated because they are more cared for,” he says.

During the next hour, Bajén and her partner Pilar Guiu, move around the class, reviewing the tasks that the kids do and organize cooperative work in small groups, including a contest, which has been going on for several sessions, in which the teams have to trying to guess which word, extracted by the teachers from one of the texts they have worked on, is defining one of its members by omitting certain terms: to explain “scream”, for example, they cannot use, among others, “scream” or “fear ”.

In the time that the class lasts, they do not have to ask for silence once, or tell any of the kids to wake up.

The institute, with just over 600 students and a significant number of students of immigrant origin, concentrates shared teaching in the first year of ESO and in instrumental subjects, language and mathematics. “There is no support teacher and no main teacher. We both have the same level of responsibility and we divide the tasks to reach the largest number of students, ”says the director.

In the hall, Victoria Akousa, 13, comments: “I like these classes because when there is only one teacher you have to wait a long time for him to come and answer a question or you prefer not to ask it, because it makes you nervous to do it out loud. On the other hand, here, if the flames come immediately and they solve it for you ”.

One of the advantages of co-teaching is that it prevents students who need reinforcement from having to leave the classroom to receive it, with the risk of stigmatization that it supposes after a certain age, several teachers agree.

Less tension
One of the people who has studied codocence the most in Spain, and one of its great defenders, is the sociologist Mariano Fernández Enguita, author of the book More school and less classroom.“It is much more relaxed than giving the class alone, because you don’t have to be 100% focused on the students all the time, spouting a roll and also watching over Menganito.

It gives rise to complementary competences: there may be a teacher who knows a lot about a topic, another who is great in dealing with students, another who is a good activity planner … It gives continuity to the projects of the centers: no a teacher gets sick or moves and the project ends.

And it would allow the integration of teachers in training, what has been called the teaching MIR, very easily. Putting them to learn with two or three experts would be totally different from doing it with one ”, says Fernández Enguita.

Almost all the examples of shared teaching in primary and ESO were concentrated until recently in subsidized schools , such as the Jesuits in Catalonia, Enguita indicates in his book. Although the public, he adds, does have experience in co-teaching in FP.

“Spain is one of the developed countries that least uses co-teaching, as the international reports PISA and THALIS point out, because there is no tradition of teamwork,” says Miguel Soler, Valencian Regional Secretary for Education.

When they do not know shared teaching, if teachers are asked what they prefer, sharing the class with a classmate or being alone with half the students, most instinctively opt for the latter. “But in reality, if you give a collective speech, the students are somewhat equal to being 15 or 30, because you address the group in a homogeneous way. While being two allows you to propose different problems according to the levels and rhythms of learning ”.