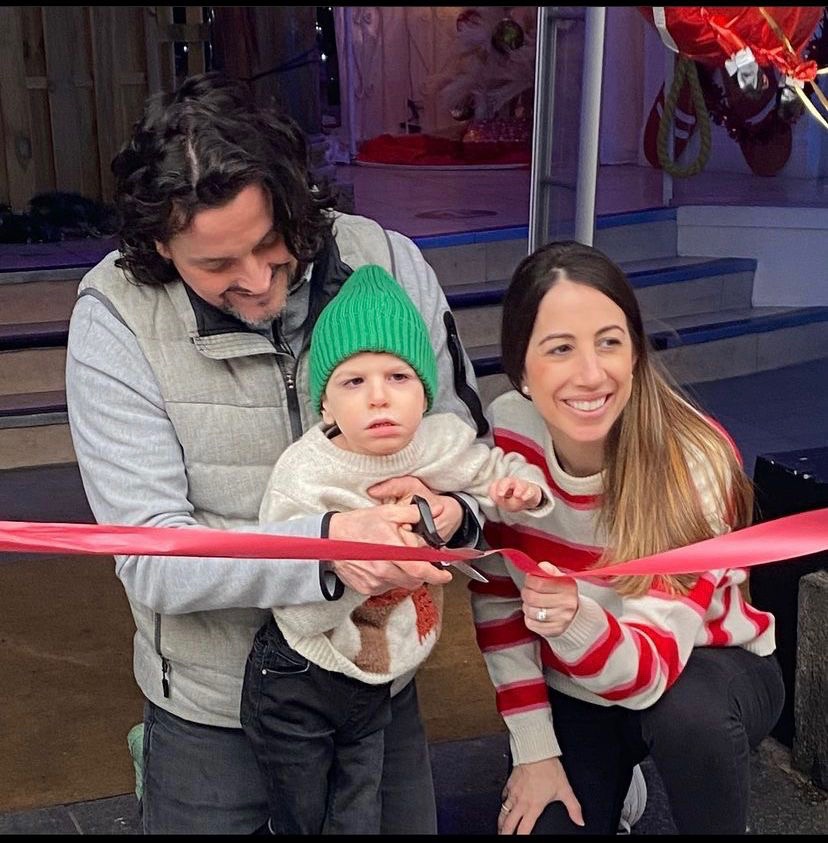 A couple, whose young son suffers from an extremely rare genetic condition, have created an all-inclusive free-of-charge Santa’s grotto designed specifically to bring the magic of Christmas to other children with special needs this festive season.

Inspired by their five-year-old son Hudson, business owners Callum and Nikki McKeefery have spent the past six months transforming an old retail shop in Leicester into an enchanted grotto, designed especially for people with special needs or a disability.

The project, which is run entirely by volunteers, stems back to Callum having to ask his uncle to dress up as Santa for Hudson because taking him to a normal grotto would distress him. But it was not until he bought an unused shop in Leicester city centre that the idea for an all-inclusive grotto was planted.

“The idea is to give children with special needs and their families that bit of normality. It’s a completely safe space, so there will be nobody there judging the kids if they’re playing up or taking their time settling in,” says 44-year-old Callum who, along with Nikki, 37 has injected tens of thousands of pounds into making the grotto possible.

“It’s not just grottos at Christmas, it’s anywhere – if you have a child who needs extra support, it’s difficult to do anything as a family.

“What often goes unrecognised is the fact that children with special needs can take longer to get used to new surroundings, so normal grottos don’t really work for them. Having spent a long-time queuing, the kids are sometimes dashed in and out within minutes. We give Santa the chance to spend longer with the children, which means they can warm up slowly and the parents can enjoy the process.

“One of our main aims is to get each visitor a nice photo with Santa – I know just how much that will mean to the parents. Sometimes, perhaps for the first time, they’ll be able to get a festive picture of their child printed and send it to family. They’ll be able to look back on that photo and have such amazing memories.

“The parents love it, there are so many tears of joy coming from them. They can share a really special moment with their child without feeling out of control and sometimes judged by others.

“And it’s not just about the children with special needs, it’s a treat for their siblings too. They could be having a tough time themselves, or they might be needing to help out more at home, they deserve to have just half an hour of normality.”

After Callum and Nikki, who live in the Leicestershire village of Kirby Muxloe, recognised a delay in their son’s development, they spent years trying to get to the bottom of the cause. Eventually, at the age of three, Hudson was diagnosed with an incurable gene-related disease called FDXR (Ferredoxin Reductase), which means he cannot walk, talk, or sit.

“It was as if someone had punched me in the stomach. It took the wind right out from underneath us,” admitted Callum, adding: “It was incredibly lonely and all of a sudden, it felt as if we were being treated differently. To some, it was as if we were invisible – people didn’t know what to say to us anymore.

“Hudson is just brilliant, he’s the happiest of little boys and absolutely loves life. He is the spark behind the grotto.”

Officially opened by Hudson himself, the grotto project launched on 1st December and will run right up until 23rd. It is expected to welcome more than 1,400 children and young adults – 600 more than anticipated – some of whom have travelled more than 60 miles.

“Every family that comes into the grotto, I can see a little bit of me and Nikki and in them. This has been a great support for us parents too, just to share our experiences and to let others know they’re not alone,” says Callum.

He explained that each child and their family get around 15 minutes with Santa – or more, if necessary – and the experience is customised to suit their needs, whether that is playing specific songs, dimming the lights, or singing with the elves.

“We’ve had one little boy, he was so anxious about meeting Santa but by the end, he was walking out holding Santa’s hand,” says Callum, adding: “We’ve had some teenagers who’ve never been able to meet Santa and now, they’re already asking if they can come back next year.

“One girl came in and when we adjusted the lights and put on her favourite song, the whole demeanour changed. Not only did she relax but she had fun. Her parents said it was the most alert she had been in months.

“Seeing their faces light up, that’s what makes it all worth it.”

Santa gifts each of those visiting with a present that has been bought specifically with their needs in mind. The presents, some of which have been purchased by Callum or Nikki, and others by Menphys, a Leicestershire-based charity that aims to provide services and activities that support disabled children.

“Menphys helps children just like Hudson and they are all about supporting the kids. I hope this is the start of a brilliant partnership. This isn’t just about the grotto now, it’s about keeping Menphys as a charity going throughout the year.”

Sadly, not everyone has seen the value of the grotto, with the window being vandalised, people verbally abusing the volunteers as they walk past, plus Callum says one woman asked for her money back when she found out the charity supported children with special needs.

“You almost see the best and worst of society when you do a project like this,” says Callum. “But as soon as you walk back into the grotto and see the difference it makes, all the negativity that comes from outside, is quickly forgotten.”

This is not the first time Callum and Nikki McKeefery have gone above and beyond to support children with special needs, having treated 14 children across the East Midlands to specially adapted sit-on electric cars last year.

“Producing the cars was amazing but I could only help 14 children, this time I can put a smile on the faces of 1,400 children,” he says, adding: “What next year holds, I’m not sure yet – I just know, I want to go even bigger.”

Bookings for the grotto are pretty full but if you have a child with additional needs that would like to come and see Santa, please email Nikki@reviews.io and the McKeefery team will do their best to get you in.

Anybody that would like to donate to Menphys can do so by visiting: Menphys.org.uk