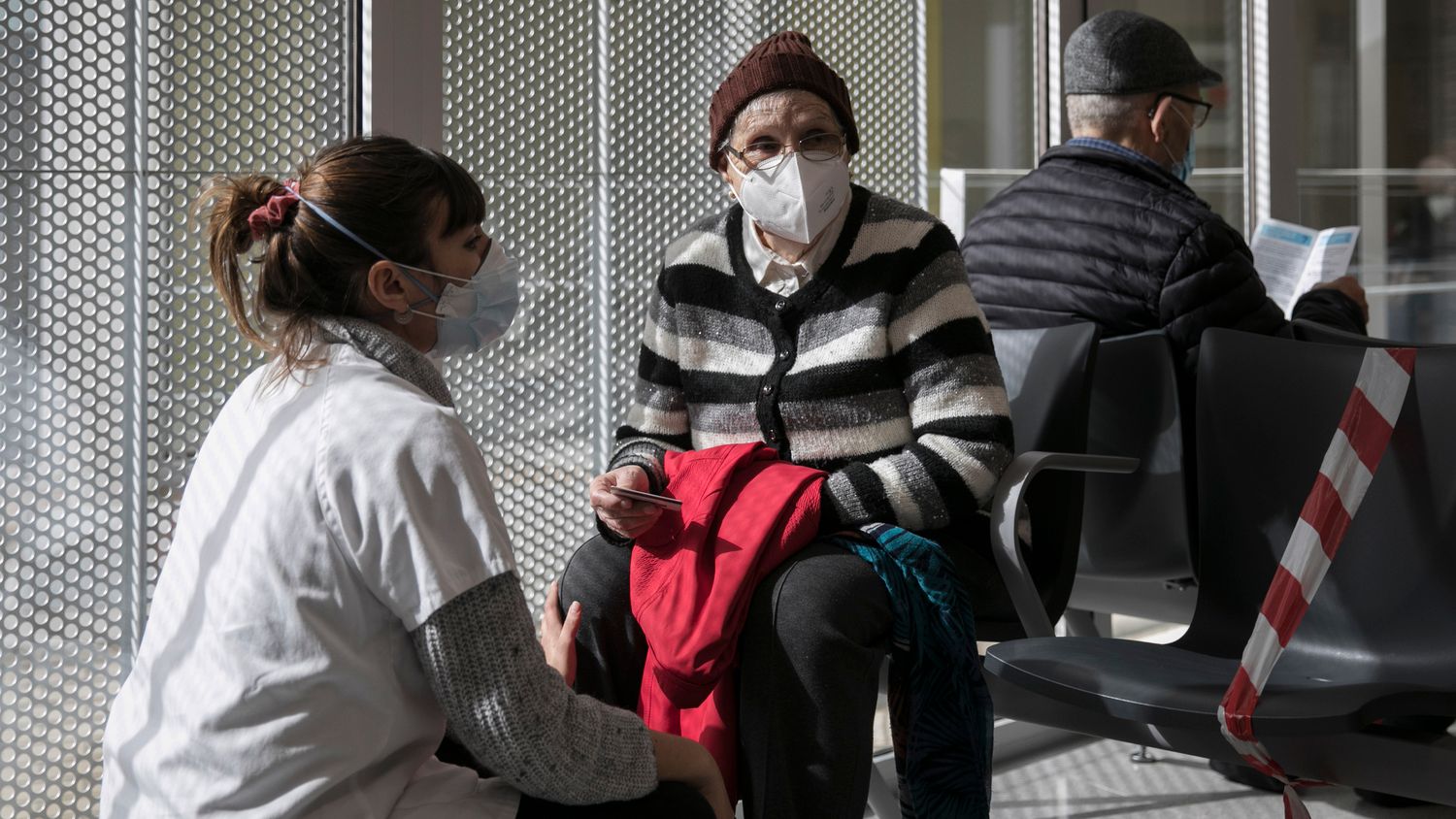 Juan Antonio Manrique’s family, 71, had him “in a bubble.” In the midst of the pandemic, he, a chronic kidney patient and on dialysis three times a week, was a very high-risk population if he contracted covid. “He was very weak. We are not even celebrating their 50th wedding anniversary, ”says his daughter, Encarnación.

But Juan Antonio was forced to get into an ambulance every other day to go to the dialysis center, where he received treatment along with other patients. It was a half-hour journey between Roquetas de Mar (Almería) and the capital of the province, which he shared with other dialysis patients.

The man ended up being infected and died of coronavirus, as did three other patients with whom he was traveling in the ambulance, although it is unknown if the vehicle was the point of infection.

Spain postpones decision to administer AstraZeneca vaccine to people over 55 years of age. Vaccination by autonomies: April will be the turning point to reach 70% of the population.

Maintaining the isolation bubble became impossible for many dialysis patients and the pandemic took hold of them. Because of their exposure to the virus and the vulnerability that their underlying disease brings. More than 4,700 kidney patients have been infected with this treatment and mortality was 25%, according to the Spanish Society of Nephrology.

In fact, this very high risk of death has led to the fact that dialysis patients are now one of the first groups of chronically ill patients that the Ministry of Health has prioritized in vaccination. After the elderly, health workers and essential workers, it is the turn of the other vulnerable: transplant patients, cancer patients on chemotherapy, people with lung cancer, kidney patients on dialysis and those with Down syndrome over 40 years of age.

Health has begun to name the groups of patients at greatest risk, but it is necessary to know how and when. The ministry has only specified that they will begin to be vaccinated at the end of those over 80 years of age, although it has not indicated with which vaccine or the start date.

There were many chronic patients or those with risk conditions who aspired to enter this block: in addition to the age criteria, obese people, with cirrhosis, schizophrenia or multiple sclerosis, cancer patients or those with a history of cerebrovascular disease were, for For example, on the list of the Spanish Society of Preventive Medicine, Public Health and Hygiene as the groups most at risk.

But with the vaccines still coming in at a dropper, it was time to re-prioritize within the priorities. Cristina Avendaño, coordinator of the vaccination group of the Federation of Spanish Scientific Medical Associations (Facme), the body that has collaborated with Health in the prioritization of risk conditions, assures that they will deliver to the ministry “the report with the identification of the groups risk: there are some that are already clear and defined, but that does not mean that they are the only ones.

These are conditions that identify patients with a very high risk of severe disease and mortality associated with covid. The idea is not to make a precise list, but to go by blocks. Now it is the turn of the block of those of much more risk ”.

The review of scientific evidence has been key to resolve the most serious conditions and the prevailing criterion is the risk of mortality associated with covid, insist the voices that have participated in the decision.

“I understand that people are restless because their disease generates a feeling of vulnerability to the virus,” says Federico de Montalvo, president of the Bioethics Committee of Spain and member of the presentation that decides the vaccine strategy. “But the feeling of risk is one thing and the scientific evidence is another. There are situations where the disease is fatal and others in which it is not ”.

It has also influenced, however, that these groups will have to overlap with the vaccination of those over 70, admits Avendaño. “You have to take into account the availability of vaccines and operability. In dialysis patients, for example, the high risk of serious disease is coupled with going to the hospital, which is a different circuit from primary care, and allows those over 70 to overlap with vaccination, ”he exemplifies.

In any case, the experts consulted agree that any of the risk conditions selected by Health are adequate. The following are the prioritized groups.

Dialysis patients. The risk of mortality from covid in this group is 3.5 times higher than that of the general population of the same age and sex, according to Facme. “They are patients who are already in a state of immunosuppression and tend to have many pathologies.

Coming to the hospital for dialysis is a risk because they also tend to come in collective ambulances, which has led to a greater number of infections ”, third Patricia de Sequera, president of the Spanish Society of Nephrology. Juan Antonio’s daughter believes that is what happened in her father’s case and is now preparing a complaint along with two other families of dialysis patients who died of covid, reports Javier Arroyo.

People transplanted or on the waiting list. This group has very low defenses when taking immunosuppressants to prevent the body from rejecting the new organ, making it more vulnerable to infections.

“They have a risk of mortality up to six times greater than the general population, although there could be differences depending on the type of transplant, the time elapsed or the intensity of the immunosuppressive treatment”, points out Avendaño. Catalonia already anticipated the official decision of the administration of vaccines and, two weeks ago, began to call this group.

People with Down syndrome over 40 years of age. Several studies indicate that people with this condition have significantly higher rates of medical complications and mortality,especially from that age. “What has been seen is that, as people with Down have premature aging, the biological age does not correspond to the chronological age.

Genetically they are also more susceptible and bring together factors that worsen covid ”, says Natalia Cuenca, coordinator of the Barcelona Down Medical Center of the Catalan Down Syndrome Foundation. Cuenca appeals to caution before celebrating the imminent vaccination. “We like to walk with leaden feet because the vaccine has not been tested in the group.

We do not know if the degree of effectiveness is the same ”, he says. But Avendaño replies to suspicions: “All populations never enter the trials, but that does not mean that we do not know what vaccines do in immunosuppressed people, for example: they may have a lower response, but we know there is an answer and it is worth vaccinating them. We know how to apply general knowledge to particular cases ”.

All vaccines, he insists, are available to the population at risk: “To the extent that we can choose, those with the greatest expectation of efficacy would have to go to these risk groups, who have more difficulty responding.”

Cancer patients. Health has chosen to start with all those patients with oncohematological diseases and solid tumors who are undergoing chemotherapy treatments. It also places special emphasis on vaccinating people with lung cancer, whether they are on chemo or immunotherapy.

The president of the Spanish Society of Medical Oncology, Álvaro Rodríguez-Lescure, reflects: “The prioritization seems adequate to us. People with lung cancer have long histories of chronic bronchopathy or heart disease and the risk of death and complications and death with covid is much higher ”.

The selection of these groups among all the chronically ill or the most vulnerable is the first step, but the experts consulted demand more specificity. “There are many types of chemotherapy, for example. It will be necessary to specify and specify more ”, says Rodríguez-Lescure, while Begoña Barragán, president of the Spanish Group of Cancer Patients, assures that in her group they are“ worried ”and are“ afraid ”because they do not know“ when this will become effective. vaccination”.

Avendaño announces that there will be more explanations. “A recent transplant is not the same as a 15-year-old, which has the lowest immunosuppression,” he assumes, and announces “a more specific list” within the first prioritizations.

Federico de Montalvo, for his part, insists that the vaccine strategy is a “living” document, adapted to the scientific evidence that is emerging. But it welcomes the announcement of the new risk groups, although the exact date of the start of the vaccination is not known.

“It is important that these people are raised with expectations as soon as possible, but carefully. It is about finding a balance between not giving false expectations and that vulnerable groups begin to have a response to lower the level of anxiety, “he says.

Mental disorders are left out
Health has not prioritized any mental health pathology in the first groups of chronic patients to be vaccinated. Not even depression or schizophrenia, which have a higher risk of complications and deaths associated with covid.

“They have the same risk as a person with a transplant. If you have a serious mental health disorder, you are twice as likely to get COVID. And if you get infected, twice the chance of dying ”, defends Celso Arango, president of the Spanish Society of Psychiatry.

The scientific organization has sent a letter to the Ministry of Health demanding that this group be prioritized. Arango maintains that the most urgent thing is to vaccinate those who suffer from schizophrenia, bipolar disorder and personality disorders.

“We know that people with severe mental disorders take longer to ask for help because they have a higher pain threshold and more difficulty in asking for help due to their cognitive situation. They take longer to arrive and arrive in a worse state ”, warns the psychiatrist.