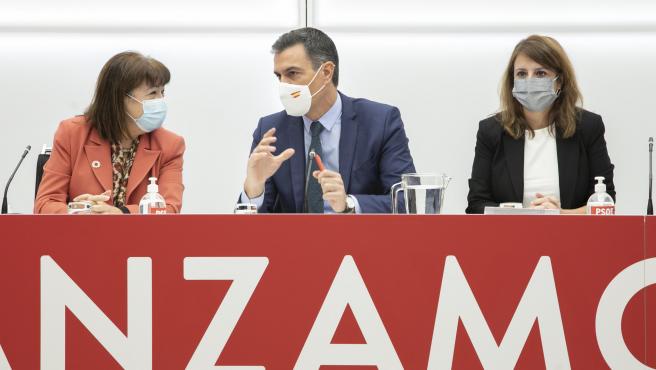 The repeal of the labor reform has strained the government coalition in recent days. The discrepancies began when the first vice president, Nadia Calviño, with the support of President Sánchez, communicated to the second vice president and Minister of Labor, Yolanda Díaz, that she assumed the coordination of the dialogue with businessmen and unions on the reform, an end that United We can rejected .

After days of controversy, socialists and purple agreed on a new coordination mechanism, but according to the minority partner, the debate on the scope of the reform persists .

And, although the PSOE denies these discrepancies, the truth is that Sánchez avoids the word “repeal” and that this Thursday he was unable to specify what the Government’s position will be on key issuessuch as the prevalence of the sectoral agreement over that of the company, and that Calviño and Díaz have been summoned on Tuesday to precisely establish the Executive’s position on the merits of the matter.

President Sánchez and Vice President Calviño, this Monday.
It is not the first time that Sánchez modulates his position on the labor reform of the PP, which he promised to repeal more than seven years ago without, after three in the Government, having fulfilled that promise.

The first time Sánchez said it was nothing more than being elected leader of the PSOE . On July 14, 2014, Eduardo Madina and José Antonio Pérez Tapias prevailed in the primaries. ” The first thing the PSOE will do is repeal Rajoy’s labor reform to recover workers’ rights,” he said the next day.

Sánchez insisted on the same idea in the speech he gave when his promotion to the General Secretariat was certified at the Extraordinary Congress of the PSOE, held that same summer. ” As soon as we govern, we will repeal the labor reform, because in the XXI century alternatives of the XIX century cannot be proposed “such as” labor exploitation “, he said before a packed audience and under the gaze of Alfredo Pérez Rubalcaba and Susana Díaz .

The need to end this “precarious, low-wage” and “cheap layoffs” model was also reflected by the PSOE in the electoral programs with which they stood for the 2015 and 2016 elections, in which Sánchez achieved 90 and 85 deputies respectively, although it contained the ‘sorpasso’ of Podemos. In both documents, the Socialists promised to “immediately repeal the entire labor reform.”

Sánchez also insisted on this after signing the ‘hug pact’ with Albert Rivera, then leader of Ciudadanos, with whom he proposed a coalition government. However, the document of 200 measures signed by the two formations did not include such a commitment .

After the bad electoral results and the decision not to abstain to facilitate that Mariano Rajoy formed a Government, Sánchez lost the confidence of the Socialist Federal Committee and was forced to leave the leadership of the PSOE, although he won the primaries again – this time, against the apparatus-.

It was on that occasion that he again raised the flag of the repeal of the labor reform, in this case, in the speech he gave in the Federal Congress of Socialists on June 18, 2017, although he avoided expressly saying that he would repeal ” the whole “reform. Nor did it do so on the sixth anniversary of the rule, although in the document published by the PSOE on the occasion of the anniversary, on February 10, 2018, the Socialists did describe this repeal as “absolutely indispensable.”

Sánchez retakes the promise in the pact with Podemos
In June of that year, Sánchez became president with a motion of no confidence against Rajoy, in whose debate he forgot the promise to repeal the reform, which he did include again in an official document months later: in the Budget agreement of 2019 that he signed with United We Can . Of course, then an important nuance was introduced. Socialists and morados did not speak of repealing “the entire labor reform”, but of “the most damaging aspects.”

This version was the one that the PSOE maintained in two electoral programs for the two appointments with the polls in Spain in 2019. “We will approve the changes that eliminate the most harmful aspects of the 2012 labor reform, “could be read in the April 28 program.” Urgent repeal of the most damaging aspects of the labor reform, combating precariousness and labor fraud “, in the 10-N program.

With the two elections held, the pact with United We Can arrived to form the coalition. In the document that Sánchez and the former leader of the morados, Pablo Iglesias, signed then, they included the “repeal of the labor reform”and the “recovery of the rights taken away” by that rule. It was Bildu who again forced the repeal to be “complete” in the pact he signed with PSOE and UP in May 2020, in which he promised to support the expansion of the state of alarm, a pact that the Socialists tried to clarify for hours longer. late.

In any case, that promise was not fulfilled either, so Sánchez made it again to announce in the speech he delivered at the last PSOE congress, held in Valencia on the weekend of October 15: “We move forward and we move forward. With the reconstruction of the island of La Palma, putting an end to laws such as the gag law and the labor reform of the PP, imposed and without agreements, which made contracts precarious and devalued wages, “he said.

However, 10 days after that event, the president once again took a discursive turn and hid the word “repeal.” In an act in which he publicly covered Calviño, he affirmed that what the Government is “committed” to is “modernizing labor legislation” to overcome the “counter- reform ” of the PP in 2012 . This version was seconded by the PSOE, whose spokesman, Felipe Sicilia, did not mention the “repeal” either when he pointed out that the Government’s objective was “a new labor reform” and “a new framework of labor relations”, in another twist of terminology. socialist. “Why can we talk about repealing? We will have to ask them, ” he concluded.