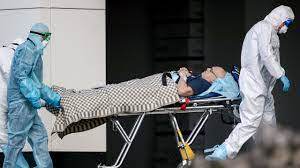 The Covid-19 returns to punish UK. In recent weeks, a new wave has triggered the contagion curve, raising daily cases above 50,000 (51,484 were registered on October 21), bringing the incidence to close to 900 cases. In addition, only on the day of Tuesday, October 19, 223 people died from the coronavirus , the highest daily death toll since March. But nothing seems enough to alarm Boris Johnson , averse to recovering the restrictions despite health insistence.

Ana (nurse), Thomas (executive) and Santiago (student), three young Spaniards living in London, explain 20 minutes later how they live their day to day in a country where the Health Minister predicts that they will soon reach “100,000 daily infections “. Each one lives their reality in a different way, but they all agree on the same message: “The United Kingdom has turned the page to the coronavirus.” Here their testimonies are collected.

“The problem will be that the Covid meets the flu season”
The conversation begins at their breakfast time. It’s six in the afternoon in Spain, but she just woke up after a long day in the ICU in an emergency hospital. “Most of the patients we admit to the ICU are people who have not wanted to receive the vaccine, deniers who believe that the virus is an invention of the government,” reveals the nurse.

According to CNN data , hospital pressure is increasing at the rate of 1 000 daily hospitalizations on the other side of the English Channel. “Although most new infections can have the disease at home, it is inevitable that there are exceptions,” he adds. People with “advanced infections”, with or without a vaccine, they are still the most vulnerable. Hence the need for the government to step on the accelerator in the third-dose vaccination campaign. “At the moment they are vaccinating health personnel with the booster dose,” says Ana.

Intensive Care Unit (ICU) for coronavirus patients
The United Kingdom was one of the pioneering powers in vaccination. Thanks to its pharmaceutical agreements , the British island was able to start immunizing its citizens before the rest, 21 days apart from Spain. However, many countries have already taken the lead and their vaccination campaign has run aground at the threshold of 66% of the population with full regimen. According to statistics, the third dose campaign and the vaccination of children between 12 and 15 years of age are less effective than those of their European neighbors.

“Most of the new patients we admit to the ICU are deniers”
At the moment, the situation in the hospital where Ana works is not critical, but, for her, the problem will come when “Covid joins the flu season, which this year has been hitting hard.” Even so, this Madrilenian living in London trusts in the health resources that the center now has, but remembers that “in the most complicated moments of the pandemic there was a great shortage of health personnel. In the ICU, each nurse assisted four patients intubated when the ratio should be one nurse per person admitted “. Hope “this never happens again.”

To do this, he thinks – just like the rest of the Confederation of Public Health ( NHS , for its acronym in English) – that “they should put some kind of measure to contain the spread of the virus.” Similarly, when he returned home from the hospital, he saw that “many people do not wear their masks on the subway.” The TfL , a public entity that manages public transport in the city of London, does oblige the use of the mask, but without legal reinforcement from the government, it is not qualified to sanction or fine those who do not use it . The rest of the people consulted testify to this, “it is a problem that has been occurring since the beginning of the pandemic,” says the following protagonist.

Thomas (account executive): “People have given up on Covid”
On the other end of the phone, Thomas has just finished his workday. In the wake of the pandemic, she now works from home. Two years ago he returned to his native country and sometimes he misses an English expression in the middle of the conversation. He is just another Briton and like them he has lost all hope of ending the virus. “I was confined for months, I took the proper precautions, I had both vaccines and the Covid is still there.”

DELTA PLUS + VARIANT
In recent weeks, medical authorities are keeping a close eye on the new Delta Plus + variant. Descendant of the Delta, this new lineage of SARS-CoV-2 appeared for the first time in the United Kingdom last July and could be between 10 and 15% more transmissible than its predecessor and twice as contagious as the original variant. In fact, the mutation coined as “AY.4.2” could be behind 6% of the new registered cases.

“It’s frustrating,” he often repeats. Before I was more attentive to the news and the latest data, lately I am more disconnected. It is something generalized, people do not care if the new variant is called Delta, Alpha … The thought of citizens here is that the world It must move on. It is impossible to eradicate the coronavirus, the public has surrendered, “he confesses.

“A good example of the fed up in English society is the response to the new Covid NHS Track and Trace tracking application, ” explains Thomas. “It works when you activate the mobile’s Bluetooth and it can recognize positive cases that have been a few meters from you,” he says. The application, with a system similar to that used by other governments, recommends “self-isolation” if you have been in close contact with an infected person.

“He has notified me three times already, if he listened to him, every time he tells me that I have been close to someone suspicious, I would spend my whole life locked up.” Faced with the avalanche of criticism,

“UK puts economy before healthcare”
For Thomas, in the United Kingdom, one of the emporiums of ” business”, ” the economy comes before health”. “Business is one of the hallmarks of this country and the Government has always kept it in mind,” he clarifies. Part of public opinion supports this liberal trend because “English citizens do not want the State to interfere in their private life. Everyone is responsible for their actions,” he concludes.

More than 9 kilometers away, Santiago strolls through the famous Candem Town neighborhood. It is one of the liveliest areas of the London capital, popular for its atmosphere when the night takes over from the sun. “I have already gone out a couple of times and they have never asked me for a Covid mask or passport to enter a nightclub,” says the young student.

London neighborhood of Camden Town.London neighborhood of Camden Town.Santiago Martinez Montaño
Santiago works as an au pair for a wealthy family with whom he hopes to improve his level of English. He also goes to the gym regularly, there the situation does not differ much. “In the gym, only a few of us wear the mask, and there are many signs that force us to use it. But it is also mandatory to disinfect the machines after using them, and I have not seen almost anyone do it.”

Due to recent events, he has noticed a slight change. “The other day, when I went to pick up the girls at the theater, I noticed that there were more parents than normal with the mask on, but nothing to do with what I saw in Spain .” The new wave of Covid may raise the concern of the English public, if the Government of Boris Johnson does not end up surrendering earlier to the need to impose restrictions to contain the virus. But you never know…