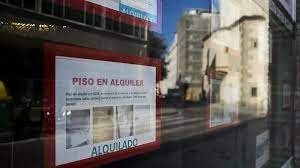 Esteve and two other colleagues rented an apartment in Barcelona last December for which they paid 1,200 euros per month until they discovered, with the help of the Sindicat de Llogateres (Tenant Union), that the price was 250 euros higher than what the Catalan income containment law . Now, the Barcelona City Council has imposed the first fine on the property for exceeding the price set by regulation.

Barcelona places the first fine for charging a rent above what is established by Catalan law
The Catalan law that regulates the rental price came into force in September 2020 and is applied in the areas of the tense housing market , where it has two mechanisms of income containment : the reference index and, in the event that the housing has been rented in the last five years, the price of the previous contract.

“The lowest one acts as a ceiling , therefore, prices that were below the index are frozen and those that were above have to go down,” says Enric Aragonès, spokesman for the Sindicat de Llogateres.

Regarding his situation, Esteve says that they asked the Institut Català del Sòl (Incasòl) for information on when his apartment had been rented and at what price “and it turns out that there was a previous and recent contract of 950 euros “. In this case, as established by law, the rental price of the new contract could not exceed 950 euros, but they were being charged 1,200.

On the other hand, after going to the property registry, we also “discovered that the owner of the house was a company and not an individual as we had been led to believe, so the contract had to be for seven years and not five and, moreover, , they had to return the 1,600 euros that we paid to the real estate company as fees , since, as the owner was a legal entity, they had to take over the ownership “, as established by the Urban Leasing Law.

Esteve and his roommates tried “for a long time” to negotiate both a correction of the price and the return of the amounts paid in excess in the previous months, which add up to more than 2,000 euros, in addition to the fees. But, when they did not get a response, they finally filed a complaint with the administration.

During the process, they got the fees back , but the landlord did not want to sit down and negotiate the rental price. “He has been missing for a long time and he has not answered us,” he says.

He also says that one of the first responses they received from the property when commenting on the situation “was to tell us that, if we wanted, we could leave the apartment ” and adds that, “from minute zero, at home we had many things to repair: doors that They did not close, a broken glass, the sink flooded, damp came out … we asked the property to fix it and they even told us that if we had believed that this was a hotel, so the treatment has always been of contempt ” .

Fine of 9,000 to 90,000 euros
After filing the complaint, the Barcelona City Council decided in favor of Esteve and his colleagues last July, and fined the property for having charged a rent higher than that established by law. According to the Sindicat de Llogateres, although they do not know the amount of the penalty, it should range between 9,000 and 90,000 euros “as it is a serious offense . “

After this resolution, “we sent a burofax to the property claiming the amounts overpaid with the corresponding interest and the signing of a new contract that conforms to the law. In the same letter, we reported that, if it continued to ignore our requests, From that month on, we would begin to pay the price set by the law and we would take all the necessary legal measures to get us back every penny, “says Eteve.

“If we organize ourselves, we can ensure that our rights are respected”
So it was. The young man explains that “to this day, we pay the price that corresponds by law and the judicial process is open to get the money back .” In addition, it indicates that the clause of the contract that indicates that the duration is five years “we understand that it is null, therefore it is seven”.

And, despite everything, both Esteve and his two roommates want to stay in it: “Being young, we had to look for a flat so many times, and we found that they always cheated us , that they charged us bail and abusive fees. Once, we went all the way and we are proud to have done it. ” After his case, he sends a message to the rest of the tenants: “We must inform ourselves , organize and mobilize. If we organize, we can ensure that our rights are respected .”

Few fines
From the Sindicat de Llogateres, promoters of the regulation, they point out that “it is worrying that the Barcelona City Council has taken more than a year to impose the first fine for a price higher than that established by law, but it is still more so than the Generalitat not put one “. They also detail that, although sanctioning proceedings have been initiated against landlords and real estate portals for not informing in their advertisements about the price of the index and the characteristics of the home, “the figure is insufficient.”

The union’s spokesman, Enric Aragonès, regrets that the Catalan administration ” is not being proactive when it comes to enforcing this law despite the fact that it was approved by an absolute majority in the Parliament with the votes of both parties of the Government (ERC and Junts ), as well as En Comú Podem and the CUP “.

“The information on the own rights is basic for its guarantee”
In this sense, he remarks that the Generalitat “should carry out a massive campaign so that there is not a single tenant who does not know that this regulation exists , how it works and how he can know if it is not being complied with or not to be able to report”, and criticizes that this is a job that, until now, the union has been doing.

“We are convinced that there are many other cases where landlords have failed regulation, but if tenants do not know well or do not know how they can check this information, can hardly denounce and may apply sanctions. Information on Own rights is basic for its guarantee, “he says.

The Government appealed the Catalan law
The central government decided, last June, to appeal the Catalan law regulating the rental price for “violating state powers . ” Thus, the Council of Ministers approved to present this appeal to the Constitutional Court, although it did not request its suspension while it resolves. On the other hand, the Executive approved on Tuesday the beginning of the processing of the state housing law that provides for regulating rents, although not in the same way as Catalan regulations.

“We are waiting for what the Court says, but we defend the full constitutionality of this law because Catalonia has its own civil law,” says Aragonès. Regarding the state law proposal, he criticizes that “the Government decided to appeal the Catalan law saying that they would regulate rents throughout the State, so I do not understand how they have presented this absolute botch full of holes that does not make any reference to Catalonia having a regulation for more than a year, when it would be an opportunity to recognize the powers and that it is not in the hands of the Constitutional Court. “

The state housing law is “absolutely void and without effect”
On October 27, 2020, PSOE and Unidas Podemos announced an agreement to design a housing law to regulate rents. And this Tuesday 26, practically a year later, the Government will approve the beginning of the processing of a rule that both parties have taken to negotiate much longer than the four-month period that was given, and that will include a mechanism for regulating rents. whose application will depend on the communities.

Regarding this state housing law and its differences with the Catalan rental regulation, Aragonès details that “the Government’s proposal, from the outset, does not oblige price reductions in all cases in which the index is exceeded , such as in Catalonia, but only in flats owned by companies with more than 10 homes. Thus, all cases in which the landlord is a natural person are excluded, which in Catalonia is around 70% “.

On the other hand, he explains that “the criteria for an area to be declared with a tense housing market are much stricter than those contemplated by Catalan law, so it is much more difficult for the regulation to be declared and applied.” In addition, he points out, the state law “also leaves a period of 18 months from its approval until it begins to be applied, and there is also no deadline to create the price index necessary to be able to apply this regulation, so it could be dead indefinitely. “

As for Catalan law, Aragonès assures that the intention is to continue expanding it and, for example, to regulate that the fees are always borne by the owner : “With current law, landlords are only obliged to assume them if they are a legal entity, so It doesn’t make any sense because the real estate agency does the service to the owner, not the tenant. “

Does regulating rents reduce the supply?
The Association of Rental Homeowners (Asval) denounced a few days ago that the draft Law for the Right to Housing approved on Tuesday by the Council of Ministers will reduce the supply of homes available in the rental market , some warnings that also they launched numerous associations of this nature before the approval of the Catalan law. But what has happened in Catalonia?

“We have data from three quarters since the approval of the law that indicates that the price has fallen twice in the regulated municipalities than in the non-regulated ones. Furthermore, the number of contracts has been maintained and, in fact, they have fallen in the municipalities in which prices have not been regulated, therefore this regulation does not have an effect on the number of contracts signed, “says Aragonès.