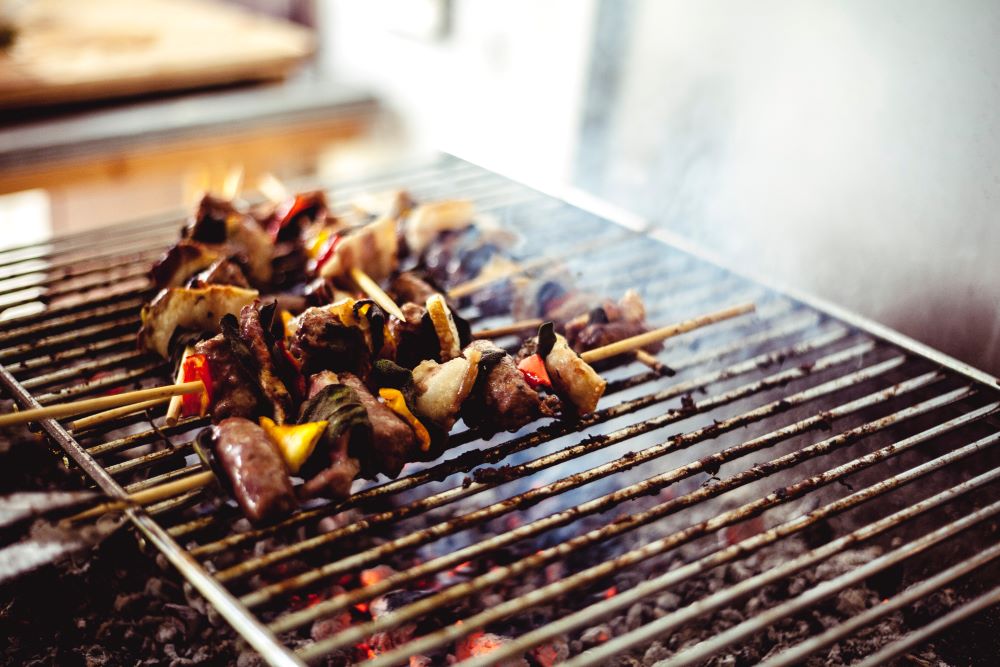 A study of 2,000 adults revealed the formula for the ultimate grill session, and found eight guests to be the most manageable.
The event should be hosted in a picturesque garden setting, including hot dogs, steak, beer – or coca cola.
While drumsticks and burgers still reign popular as main dishes, many would also want fish (15 per cent) and kebabs (18 per cent) served.
Music should be played in the background according to 47 per cent, but 21 per cent would rather watch sport on the TV.
Ketchup was voted the favourite condiment by 37 per cent followed by barbeque and mayonnaise (31 per cent respectively).
And for those wanting to travel for their perfect barbeque, Heddon’s Mouth, Devon, Seaford Beach, Brighton and Beacon Fell Country Park, Lancashire are among the top locations.
The research, commissioned by Warburtons, also found 25 per cent believe it’s not a proper barbeque without a bowl of coleslaw, while 22 per cent enjoy a potato salad.
The white burger bap remained a firm favourite (21 per cent) when it comes to the preferred bread followed by a brioche bun (13 per cent).
The ‘perfect barbeque’
A spokesperson for the brand said: “As a nation, we love a barbeque, and come rain or shine they represent a great British summer.
“It’s been interesting to learn what the nation considers to be the ‘perfect barbeque’ and we’re thrilled to see that the classic white burger bap still tops the charts.”
Nearly a fifth (18 per cent) opt for washing down their food with a cider, while a further 18 per cent choose wine – and 21 per cent prefer soft fizzy drinks.
And for those with a sweet tooth, ice cream is deemed the perfect pudding (19 per cent) with strawberries and cream taking second place (14 per cent).
Nearly half (45 per cent) admit cooking barbeques is one of their favourite smells of the summer and would typically like to have one themselves twice a week.
Whilst men are more likely to step up to the grill (38 per cent), it was revealed a quarter of them regularly end up burning the food.
A third prefer to host – with men stating this more than women (41 per cent).
But nearly half of those polled would rather be an attendee, women more so than their gender counterparts (53 per cent).
July is prime cookout time
The average Brit will hold three cookouts a year, attending a total of four and picking July as the best month to have one.
The study, conducted via OnePoll, also found 28 per cent will tend to use the grill rather than the oven during the hotter months.
While gardens proved to be the most popular location for hosting, a beach (42 per cent), a lake (15 per cent) and even a festival (7 per cent) also made the list.
These findings have led Warburtons to team up with UK Hidden Gems to pinpoint the top locations to scenic barbequing across the UK this summer – with the likes of Rutland Water Park, Rutland and Castle Ward, Northern Ireland also making the cut.
Ryan Young, founder of the escapism aficionados, said:  “We’re noticing more and more that people are looking to enjoy the great outdoors while at the same time enjoying a barbeque.
“It is great to see that the research continues to back this movement”.
Top five barbeque foods