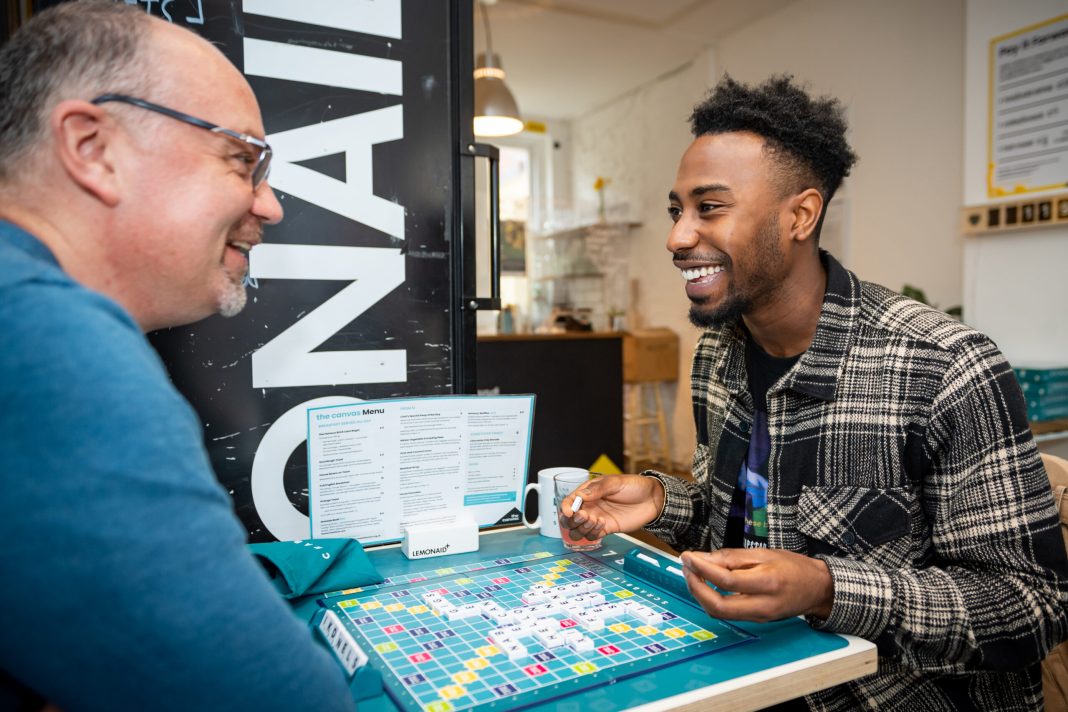 A poll of 2,000 adults found 36 per cent actually feel their levels of loneliness have increased since the lockdowns ended.
As a result, 73 per cent recognise a strong sense of community is important for their wellbeing.
While more than half (53 per cent) want to ‘do their bit’ to help reduce isolation within their community.
In fact, many stated visiting a coffee shop, playing games and catching up with friends or relatives are some of the ways people feel more connected to those around them.
To help people feel more connected, Scrabble, which commissioned the research, has created a pop-up in The Canvas, near Brick Lane, London, where they can meet other members of the community and play a game as an ice breaker.
The pop-up will run from National Scrabble Day on Wednesday 13th April through to the end of Mental Health Awareness Week on Sunday 15th May, which aims to raise awareness of loneliness.
Scrabble has also teamed up with The Cares Family, a charity who creates local community networks of young professionals and older neighbours to reduce loneliness and unite people.

Kelly Philp, from Mattel UK, said: “Words can be a powerful tool to connect, uplift and bring about positive connections.
“This National Scrabble Day, we want to use the power of words to build connections and community, and we are proud to partner with The Canvas and The Cares Family to be a force for good by encouraging new connections.”
Ruth Rogers, the founder of The Canvas, said: “Our ethos for The Canvas is to bring about positive change and create meaningful experiences for our community.
“We are delighted to host a Scrabble pop-up to invite people in who may struggle to make connections, and to bring people together.”
The survey also found the average adult has five face-to-face conversations with someone close to them each week.
But 28 per cent said there are days where they do not talk to another person.
Taking up new hobbies and joining social clubs are some of the ways those who feel lonely have tried to combat it.

More than half (54 per cent) said playing board games with some can help to reduce their loneliness.
While nearly seven in 10 claim hearing supportive words from a loved one is important to make them feel less lonely.
Words like happy, content and relaxed is how those polled describe the feelings they experience when they do get together with others.
Johanna Brooks, head of communications at The Cares Family added: “We aim to help people find connection and community in a disconnected age.
“The need for community is more apparent than ever, which is why we are excited to support this new way of bringing people together.”
The Canvas x Scrabble pop-up will live at The Canvas, 42 Hanbury St London, E1 5JL between 13th April and 17th May 2022.
The Cares Family will also be hosting Scrabble Games Nights throughout May, after receiving boards to help build friendships within their communities.