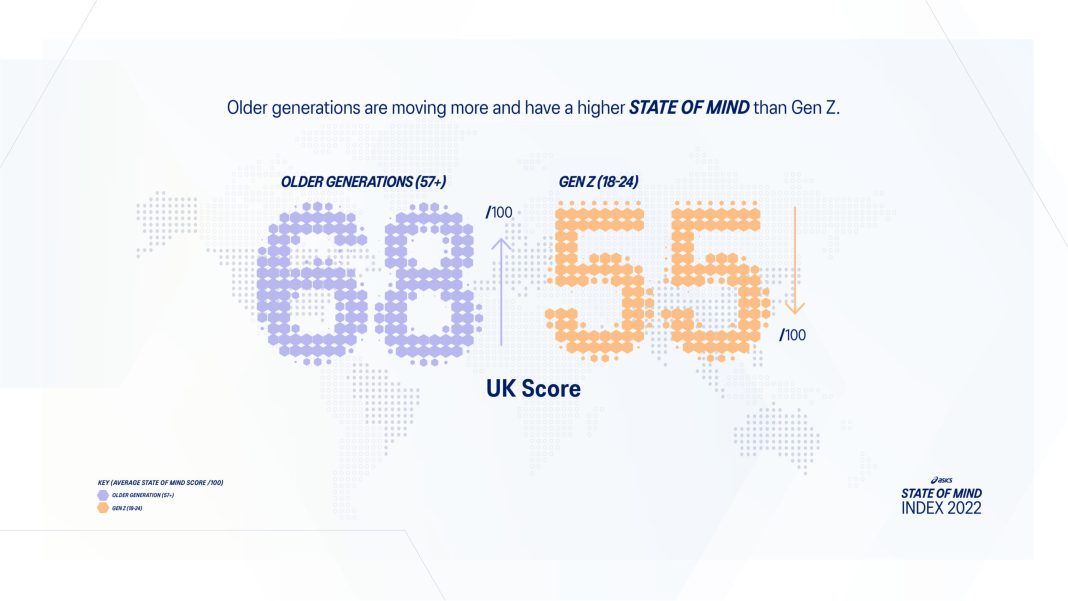 Data found Baby Boomers – those aged 57-70 – were the most active, exercising for an average of 215 minutes a week.
In contrast, Gen Z – those aged 18-24 – were the most inactive, with a weekly average of 111 minutes of exercise.
The study also suggested a positive link between exercise and mental health with Baby Boomers rating their mental wellbeing higher than their younger counterparts.
The Global State of Mind Index, commissioned by ASICS, found Baby Boomers had the highest State of Mind score at 68 out of 100.
But in contrast, Gen-Z, who were the most inactive, had the lowest score at just 55 out of 100.
A follow up study of 2,000 adults commissioned by the brand looking into the reasons behind this ‘generational exercise gap’ found 38 per cent of baby boomers saw regular physical activity as ‘essential’ to remain connected to their peers.
And 82 per cent consider it important for their mental wellbeing, with more than seven in 10 admitting they realised this as they got older.
But for Gen Z, who exercise the least of all age groups, 56 per cent said they are time poor and struggle to fit physical activity around work and social commitments.
Other barriers for young adults when it comes to exercise included a not having the motivation (26 per cent), while 15 per cent felt they weren’t educated enough on how to stay fit and healthy.
It also emerged that baby boomers said exercise was their top hobby, but Gen-Z are more likely to spend their spare time watching TV (31 per cent), listening to music (30 per cent) or sleeping (25 per cent).
And as many as 63 per cent admitted there are some days where they just can’t find the motivation to get themselves up and out of the house, despite knowing they are likely to feel better for it.
The good news is that 69 per cent of Gen-Z adults do want to be more active and exercise more.
The study also found more than 70 per cent of adults consider the benefits exercise can have on their focus in general, positivity and attitude to work when deciding whether to do something physical.
The ASICS’s State of Mind Index, conducted by the brand across 17 different countries, including the UK, also found that while the global population think 30 minutes is the minimum amount of exercise required to experience uplifting impact of movement, the research shows just 15 minutes and nine seconds is all it takes.
Dr Brendon Stubbs, a leading exercise and mental health researcher from King’s College London who led the study, said: “There is a common perception that you need to move for a long time to experience the uplifting benefit.
“However, our new research proves this is not the case – just over 15 minutes of movement is actually all it can take to experience the positive impact.
“Coinciding with the State of Mind Index, which demonstrates the positive link between movement and mental health on a global scale like never before, we hope it will be inspiring for many to see the impact that such a small amount of movement can have.”
Within the Index, it also emerged those who exercise more than 150 minutes a week had a ‘State of Mind’ score of 68 out of 100, compared to just 57 out of 100 for those who are classed as inactive – exercising less than 30-minutes a week or not at all.
Men have a higher ‘State of Mind’ than women (67 compared to 59), while Londoners came out on top with a score of 65.
Gary Raucher, executive vice president, ASICS EMEA added: “At ASICS, it has long been our belief that sport has the power to uplift both an individual and the world like nothing else.
“While the results of our Global State of Mind Index prove just how intrinsic the link between regular movement and positive mental health is.
“They also show the potential impact a small amount of movement could have in raising the world’s collective State of Mind.