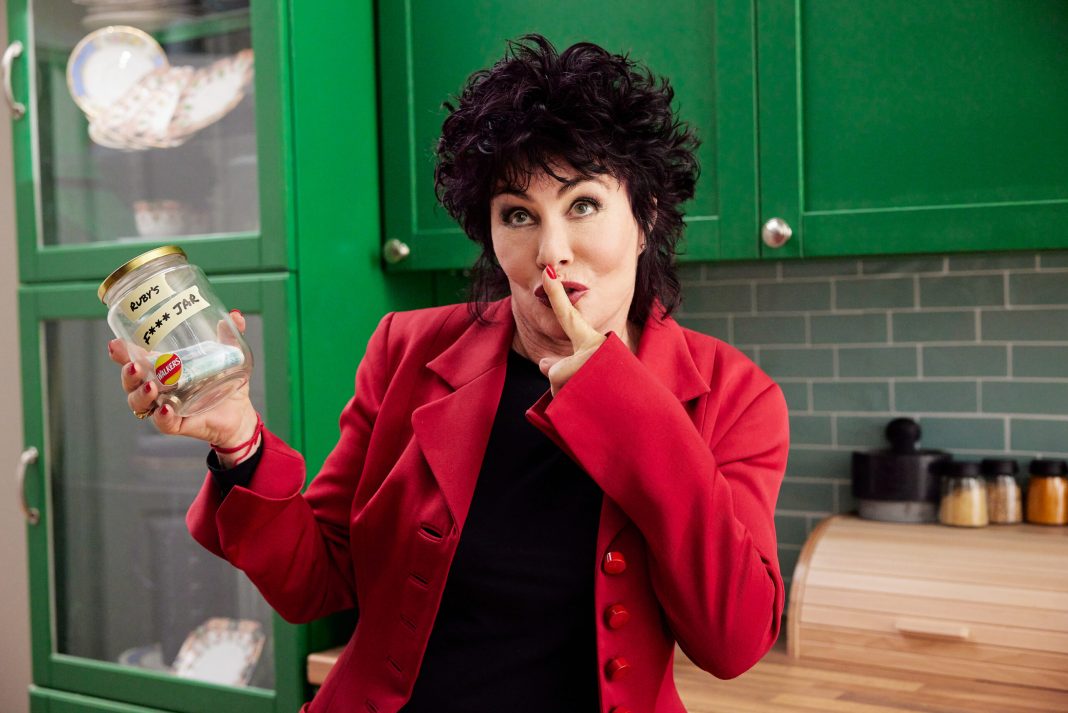 A study of 2,000 Brits found they proclaim they’re ‘fine’ four times a day – 28 times over the course of a week.
Yet, more than a third of the time (38 per cent) a person says the ‘f word’ (fine), they’re not being honest.
More than two thirds (70 per cent) regularly say ‘I’m fine’ on autopilot before even thinking about how they really are.
The research, commissioned by Walkers for its ‘F Word Report’,  also revealed the barriers to giving open and honest answers, with the main reason being that it’s easier than explaining why they’re not fine (47 per cent).
And more than a third (35 per cent) don’t think people actually want to know how they are.
While 24 per cent don’t give an honest answer for fear of being seen as ‘draining’ or negative, and a fifth think they’ll come across as a ‘mood killer’.
It also emerged the average adult asks others how they are at least four times per day, but just 55 per cent actually want to know how the other person is.
Ruby Wax, comedian and mental health campaigner, said: “As someone who has been very open about their battle with mental health, and has studied human psychology extensively, for me the greatest method of entry into people’s minds is making them laugh.
“Often, it’s not about the question you’re asking, but the context and way in which you ask it that will impact the way in which the other person responds.
“And for me appearing as authentic and open as possible is the best way to get others to open up with how they’re honestly feeling.
“As a subject very close to my heart, I’m hoping that through this campaign and banning what is, in my opinion, the most offensive ‘F***’ word out there, we can open up the conversation surrounding mental wellbeing.”
The study also found 54 per cent of adults would be more likely to admit when they’re not feeling fine if others answered honestly.
Of those who have ever opened up to someone else about how they’re feeling, many were met with unenthused reactions, including the other person changing the subject (17 per cent), ignoring them (17 per cent), or saying nothing at all (16 per cent).
While more than one in 10 (12 per cent) have even had people walk away.
If faced with someone opening up when they asked them ‘how are you?’, many admit they’d struggle and wouldn’t know what to say to help them feel better (14 per cent), would feel awkward (13 per cent) or out of their depth (11 per cent).
Almost half (45 per cent) believe it’s typically British for people to say they’re ‘great’ or ‘fine’ even if they’re not, and 30 per cent sometimes don’t give an honest response because it’s not ‘polite’.
It was also revealed that ‘How are you?’ is the most common way to ask others how they are for 45 per cent – but ‘are you ok?’ and ‘everything ok?’ are the questions most likely to encourage people to open up.
Almost half (45 per cent) believe it’s the stereotypically British way to say that you’re fine, even when you’re not.
But 64 per cent wouldn’t even open up to their closest friend, and 77 per cent wouldn’t give an honest answer if their parents asked ‘how are you?’.
Money worries (29 per cent), feeling lonely (29 per cent) and fearing they’re not good enough (27 per cent) are among the top things that get the nation’s moods down.

Additionally social media ‘FOMO’ (fear of missing out) is a source of strife for Gen Z and Millennials, with 29 per cent of 18-24-year-olds and 21 per cent of 25-34-year-olds claiming this gets them down, compared to 15 per cent of the general population.
However, there appears to be truth to the belief that laughter is the best medicine, with 45 per cent claiming a good laugh with a friend or relative is likely to improve their mood.
And 34 per cent think talking it through with loved ones helps.
Irina Panescu, from Walkers, said: “We believe humour is a great ally to start conversations and open up about real feelings, so through our partnership with Comic Relief and campaigns like these we’re on a mission to get the nation talking and looking after mental wellbeing.
“We’ve always been about bringing levity and moments of relief to people’s lives so as a brand this was a natural territory for us to explore.
“But we certainly weren’t expecting the results we received and were surprised by just how much the nation is bottling up how they’re truly feeling, with ‘I’m fine’ being used on autopilot, rather than as an honest response.
“’Fine’ stops us from opening up about how we really feel, so through banning the ‘F***’ word this week, we want to open up the conversation surrounding mental wellbeing, and encourage the nation to give honest and open answers when they’re asked ‘how are you.’”
To find out more and join Walkers and Comic Relief in giving up the ‘F***’ (fine) word visit www.comicrelief.com/walkers

RUBY’S TOP 5 TIPS TO ENCOURAGE PEOPLE TO OPEN UP WHEN ASKED ‘HOW ARE YOU?’
1.            The greatest method of entry into people’s minds is making them laugh, so lead with light-hearted, laugh-inducing questions, and use humour in your responses.
2.            Often it’s not about the question you’re asking, but the way in which you ask it that will impact the way in which the other person responds. Don’t just bark it at them and move on. Look them in the eyes after they say,” Fine,” you could say, “And besides that how are you?”
3.            You could start out by telling them (honestly) how you feel. That breaks the ice and they don’t feel so exposed to open up.
4.            Remember to listen, look at them  and show you care rather than go into auto-pilot and move away.
5.            Give them a list of emotions and ask them to pick one – fine will not be accepted.