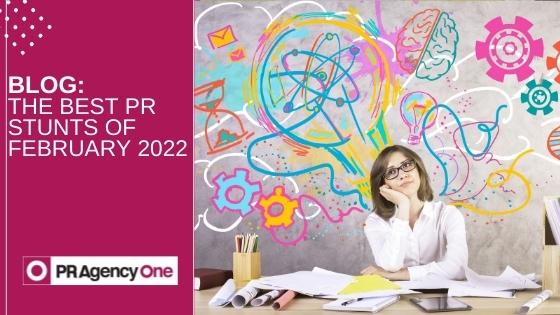 A good PR stunt is many things, visible, creative, bold etc. but the very best PR stunts are those that cement themselves in your memory, and go above and beyond to be relevant, fun and promote their brand.

February has seen a number of publicity stunts that have gripped people’s attention and taken advantage of some of the most controversial and trend setting moments of the month, so here are our picks for stunts that had the most to say and said it the loudest.

In a collaboration many will have not seen coming, Greggs and Primark made headlines with a clothing range early in February. Hints at a collaboration between the two were seen on the official Greggs Twitter page and eagle-eyed shoppers also spotted sausage rolls and pasties from the bakery chain stuffed into the pockets of Primark mannequins. The merch on offer varied from hoodies, T-shirts, trainers, socks and more.

Environmental sustainability is near the top of many businesses’ agendas, and a particular focus on reducing digital carbon footprint has led to many companies taking a closer look at the impact their websites and social media have on the environment. Energy company Dalkia, recently took responsibility for their energy consumption, marking their social media posts with the hashtag #dld (‘date limite de disponibilité’) alongside dates marking when the posts will be deleted. In addition to this they’ve also optimised their website for more efficient energy consumption.

Adidas 3D printed eight colourful statues, made from sustainably recycled marine farmed waste plastics, to represent a number of prominent sportswomen and activists. The statues were placed on the London’s South Bank, and feature:

Adidas claimed they did this because 21% of all statues in London are of men, whereas only 4% are of women. While the statues will not remain on the South Bank forever, they will be dispersed across the UK for permanent placement, this is a great example of a PR stunt to highlight diversity.

The National History Museum and Dunelm created a partnership in support of the environment, with cushions, bedsheets and toys designed based around what can be found in the National History Museum itself. Designs include pictures of wildlife and dinosaurs, and plans to reiterate the importance of environmental conservation, something many customers and businesses are becoming increasingly aware of when buying and selling products.

February has been a great month for PR stunt successes with some unexpected, fun and thought-provoking themes and messages.  Hopefully the coming months will bring even more memorable and creative content to discuss that not only grabs the public’s attention but also draws it to some of the important issues and topics being discussed throughout the world.

We’ll carry on bringing you the latest in industry creativity but if in the meantime you’re stuck and need a creative catalyst then our free creativity guide for public relations is the perfect place to start.