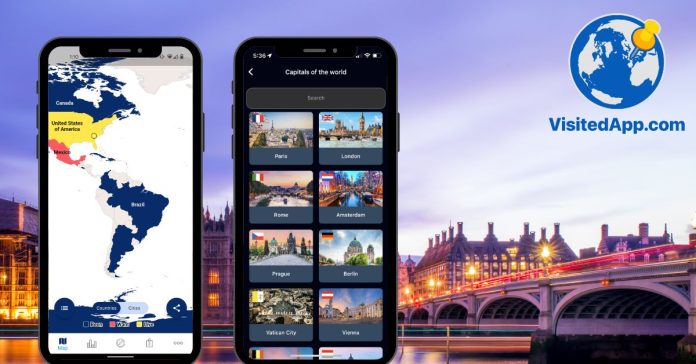 Arriving In High Heels has published the Top 10 most visited capitals. The data was collected from the international users of Travel App’s Visited. The new travel app keeps travel memories alive as well as inspiring travelers next locations. Users of the app, have access to travel lists that are created through their choice of travel goals and stats.

The recently developed list feature, features some of the most popular places to visit including Ancient Sites, as well as travel lists for adventures like diving and culinary experiences. New lists are being added on a monthly basis and lists are constantly being updated to ensure that any changes in travel destinations are reflected in the top 10 list.

The top 10 most visited capital cities as per the app’s users are all found in Europe:

– Rome, Italy – Visitors come from all over the world to see the many ruins and excavations including the famous Colosseum.

– Amsterdam, Netherlands – Amsterdam is a city best visited by taking the water canals or cycling through its multiple bike paths.

– Prague, Czech Republic – Is home to the famous Charles Bridge which was build in the medieval ages and crosses the Vltava river.

– Berlin, Germany – Berlin has a vast history and multiple palaces and has become known in the art scene.

– Vatican City, Vatican – Is home to the biggest church in the world the St. Peter’s Basilica, the same church which is home to the pope.

– Vienna, Austria – Vienna is known for its museums, there are over 60 of them! It is also the capital of music.

– Brussels, Belgium – Brussels is famous for its Moules-frites, beer and chocolate which makes a visit to this capital extra sweet.

– Budapest, Hungary – With the famous parliament building and Chain bridge, visitors can also bath in what is known as a capital of thermal baths.

To learn more about the Visited app and its latest feature update, please visit https://visitedapp.com.

About Arriving In High Heels Corporation

Arriving In High Heels Corporation is a mobile app company; Visited is their most popular app.