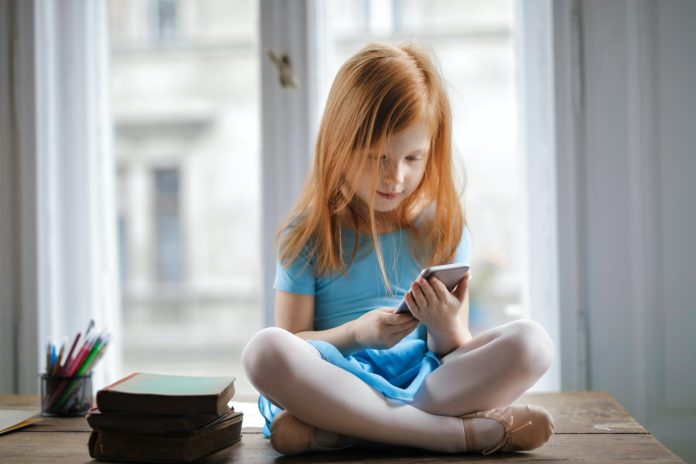 Kids could suffer from long-term eye health problems, as 36 per cent spend more than five hours-a-day glued to screens over the school summer holidays.
A study of 1,500 parents found four in 10 were completely unaware extended periods using gadgets, such as tablets or phones, can be a leading cause for eye problems, like myopia – commonly known as short-sightedness.
And only 21 per cent feel particularly worried about overuse of screens and the potential damage they can do.
It also emerged that despite experts warning eye tests are essential to help lower the risk of long-term eye health problems, 31 per cent of parents have NEVER had their children’s eyes checked.
And 38 per cent don’t know the signs or symptoms they should be looking out for if their little one was to have myopia.
While 42 per cent were not aware the condition is irreversible or incurable.
Summer holidays increase eye health concerns
Matt Oerding, founder of the Global Myopia Awareness Coalition, an organisation challenging parents to reduce their screen time this Bank Holiday weekend, said: “By 2050, 50 per cent of the global population are expected to have myopia and we are already experiencing a surge in myopia in children.
“Certain activities can contribute to the progression of myopia, such as increased screen-time, and we know that in the school summer holidays, children may spend a lot of their days off watching TV or playing on devices.
“To support the future of children’s long-term eye health, we want to encourage parents to get their children taking part in ‘sight saving’ activities and screen-free swaps this Bank Holiday weekend.
“Just 76 extra minutes outside a day can reduce the risk of myopia by 50 per cent – so let’s start now.”
Some parents have never booked an eye test for their children
The study also found 13 per cent of parents who haven’t taken their children to an eye test thought it would be arranged by the school – but vision screenings at school not considered a substitute for a comprehensive eye examination.
And 10 per cent admitted it had quite simply never crossed their mind.
Yet, of those who have never taken their children to the opticians, 35 per cent said their child is displaying at least one symptom of possible eye issues, including being disruptive in school (13 per cent), needing to sit close to a whiteboard (13 per cent) and experiencing headaches (12 per cent).
Other symptoms experienced included straining eyes (12 per cent), finding it difficult to read (10 per cent) and sitting too close to the TV (seven per cent).
Preventing the irreversible disease
It also emerged 56 per cent would routinely take their child to a check up with a healthcare professional over an eye test.
While 42 per cent are more likely to take their child to a dentist appointment.
But the study also discovered 18 per cent don’t monitor or manage the time their child spends on screens.
And 42 per cent admitted their child spends more time indoors on their device than outside playing.
Of those who took part in the survey through OnePoll, 41 per cent said they now plan on taking their child for an eye test before the new school year starts in September.
Optometrist Dr Keyur Patel, who is working with GMAC, said: “Myopia is on the rise in children, and has become a global health issue, so regular eye examinations with an Optometrist, are important to identify any problems.
“It is an irreversible disease and can be a barrier to a child’s ability to do their best and fulfil their potential.
“The condition will continue to worsen if they do not get help early on, and therefore, it is crucial that children have annual eye examinations.
“It also helps to be aware of any changes in your child’s behaviour, like struggling to see the board at school or complaining of tired eyes and headaches, as these are potential signs of myopia.
“Parents, children, and opticians need to work together to protect children’s eye health.”
Extended screen time increases risk
TV presenter Myleene Klass, who is supporting the Global Myopia Awareness campaign, said:  “I’ve had myopia since I was four years old and as I’ve got older, my eyesight has got progressively worse.
“As a child, I would sit so closely to my sheet music or virtually on top of my workbooks at school.
“One thing that can cause myopia is extended time on gadgets and screens, which can lead to an increased risk of future eye health problems – so I’m always asking my kids about their vision and trying to limit screen time where I can.”
To download the GMAC Screen Staycation Guide with ideas on some screen-free swaps for your children this summer, go to www.myopiaawareness.org/uk.