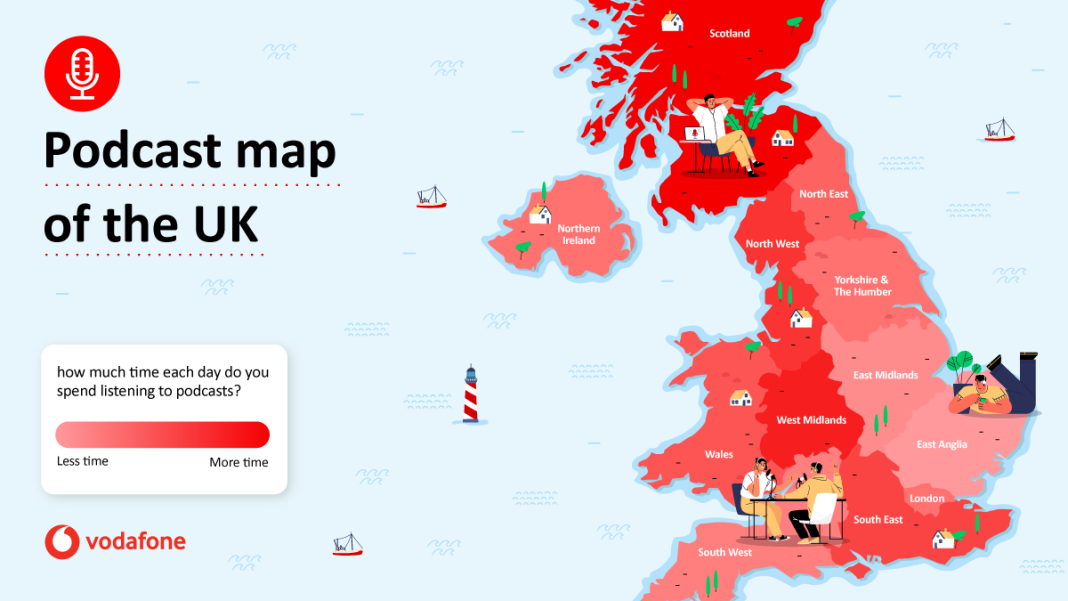 A survey of 2,000 adults has revealed the UK’s favourite podcasts, genres and the listening habits of the nation.

Comedy (30 per cent), entertainment (25 per cent), sport (23 per cent) and true crime (19 per cent) were voted the most popular podcast genres overall.

Yorkshire and the Humber is the most sports-mad region of the UK, with 28 per cent of podcast lovers listening to sport-related content.

Those living in Northern Ireland are the biggest consumers of true crime, while residents in the south west are most likely to listen to shows on health and fitness.

And it emerged the Welsh enjoy more podcasts about personal development than any other area in the UK.

The research, commissioned by Vodafone, found more than three quarters of the country likes to listen to podcasts via their phone while they’re on the move.

The next most popular device to listen to podcasts on was a tablet, with one in 10 people consuming shows this way.

Almost a quarter of all Londoners said they listened to podcasts while commuting, making England’s capital most heavily dependent on audio shows during the trip to work.

Enjoying a podcast while out and about is a popular hobby for a lot of Brits, and in Northern Ireland almost a third of respondents will listen to a show while walking their dog.

Max Taylor, Consumer Director at Vodafone, which commissioned the study, said: “The huge growth of podcasts during the last decade has been nothing short of spectacular.

“Part of their appeal is you can listen to your favourite shows from wherever you are, as well as being able to stream them whilst you’re on the move – whether that’s popping to the shops or whilst on the school run.

“Popular streaming services such as Spotify have gone from strength to strength during the pandemic and they’re here to stay.”

The survey found people who live in inner-city centres are twice as likely to listen to business podcasts compared to those who live in rural areas.

Almost six in 10 inner city Brits said they had been inspired to change something in their life after listening to a podcast.

Among the biggest lifestyle changes people had undertaken after listening to a podcast included eating healthier, exercising more or learning a new skill.

One in five who live in inner cities said a podcast had inspired them to change career – this figure dropped to just three per cent of those who live in a rural area, village or small town.

Podcasts are a popular conversation starter among much of the nation, with more than half of respondents admitting they discuss or recommend shows to friends or family.

The Peter Crouch Podcast, Newscast and Parenting Hell rated among some of the most popular podcasts in the study, which was carried out via OnePoll.

The UK’s consumption of podcasts is on the up too – as many as 42 per cent of respondents said they listen to podcasts more now than before the coronavirus pandemic – with just seven per cent saying they listen to audio shows less.

Vodafone’s Max Taylor added: “A huge number of us listen to podcasts when we’re out and about.

“Our love for comedy podcasts, as shown in the research, proves shows we’re a nation that loves a good laugh.

”With Vodafone’s award-winning network for reliability and our exclusive music partner Spotify, you can be confident you’ll be able to listen to your favourite podcasts wherever you are.”