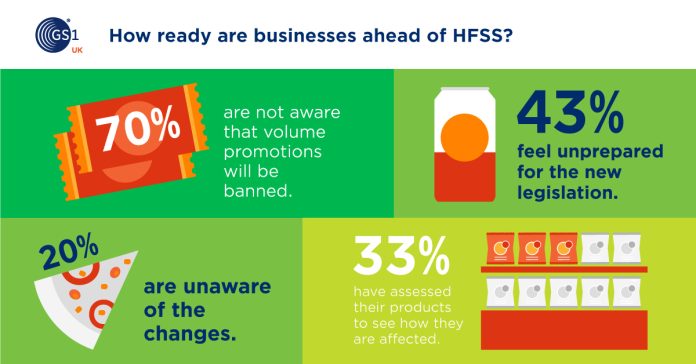 New legislation, due to be implemented from 1 October, means products high in fat, salt or sugar (HFSS) will be banned from ‘appealing’ spots on store shelves.
In a bid to curb unnecessary intake of unhealthy items, consumers will also no longer see sweet treats on offer near any entry point or checkout.
Advertising across all media will be affected, with commercials no longer allowed to run before 9pm and limitations on social media promotions imposed from the 1 January next year.
Although, exemptions will be in place to protect businesses who have small premises or less than 50 employees.
But research has revealed just one in three businesses have checked their products ahead of the landmark legislation, which aims to curb Britain’s obesity crisis in one of the biggest shake ups the retail sector has faced.
While a quarter have not even considered auditing their products at all, with one in five businesses unaware of the new legislation altogether.
The study, commissioned by global standards organisation GS1 UK, of 400 managers and business owners in the food and drink industry, revealed that more than four in 10 feel unprepared for the changes.
And 73 per cent are unaware that volume promotions, such as BOGOF offers, will be banned.

It also emerged just 33 per cent are training staff on the new rules, while 35 per cent are auditing suppliers, and 48 per cent are reworking existing products.
While two-thirds said more financial support from the government is needed to help them adapt – with 81 per cent predicting the new rules will change how their business operates.
Anne Godfrey, CEO of GS1 UK, said: “The HFSS legislation represents a seismic shift for businesses across the UK and many of our 57,000 members will be affected.
“While our research reveals that businesses and consumers are aligned on the benefits the changes can bring, the findings show there is much more to be done if the sentiment of the legislation is to become a reality”.
Further research of 1,500 consumers found the legislation will significantly affect shopping behaviours – given more than half frequently buy HFSS products every time they shop.
It also emerged that 51 per cent would be less likely to purchase HFSS items if they were less visible in store.
And a quarter would buy fewer if they were only available at full price according to the OnePoll data.
More than half would miss buy-one, get-one-free offers on such products – which could be problematic given Brits are living through the biggest cost of living squeeze in decades.
However, businesses (66 per cent) and consumers (68 per cent) both agree on the need for regulation to curb unhealthy eating.
More than a quarter of those in the food and drink industry said they will be negatively impacted, with the amount of time and money required to change existing products or develop new ones given as the top reasons.
Anne Godfrey from GS1 UK added: “Many businesses feel overwhelmed with the challenges they have faced over the last two years, but there is no doubt that the industry, now more than ever, needs to take a standardised approach for the collection of quality data if they are to adapt quickly and confidently to new legislation and growing consumer demand.”
To help brands and businesses get compliant, GS1 UK has launched a free HFSS solution as part of its productDNA platform.
Launched in collaboration with Asda, Morrisons, Sainsbury’s, Ocado and Waitrose and Partners, the solution is aimed at making complying with HFSS legislation easier and more efficient for their suppliers.