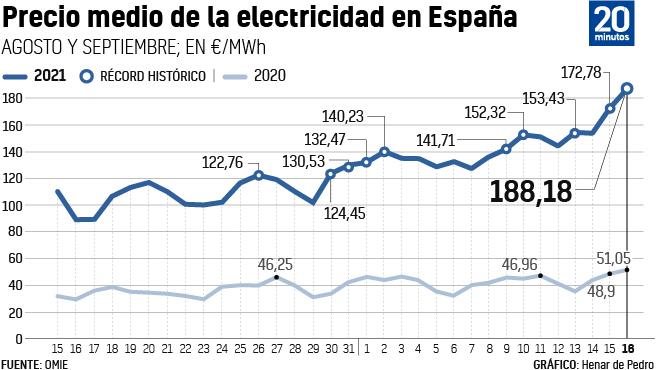 The wholesale price of electricity continues to break records in Spain and this Thursday will reach 188.18 euros per megawatt hour, an increase of 16 euros in a single day (an increase of 9%), after the 172.78 euros on average of this Wednesday.

Several screens show stock information, this Wednesday at the close of the Madrid Stock Exchange.
The price of this Thursday thus chains the highest data of the historical series for the second consecutive day . This new level also means that in just two days the ‘pool’, which in Spain is used to calculate the regulated rate to which about 11 million users are welcomed and serves as a reference for the other 17 million who hire in the free market, has become more expensive an average of 23% (34.75 euros) and quadruple the price that marked a year ago.

The new record is registered after the publication this Wednesday in the BOE of the royal decree-law approved by the Government to try to cushion the impact of the rise in the electricity bill. This decree includes a series of measures that have irritated the power companies and that have even led the nuclear sector employers to threaten the closure of all reactors.

In this regard, the Minister for the Ecological Transition, Teresa Ribera , said this Wednesday that profitability for electricity companies “is out of question” despite the measures that the Government has adopted, although some of them have seen their listing on the stock market fall. it has collapsed ( Endesa and Iberdrola , mainly). “Another thing is that they would have preferred that this pass them by side,” added the minister in an interview on RTVE .

Pedro Sánchez: “This is a resounding message for anyone who wants to hear it: we are going to be on the side of the citizens”
Regarding the closure of the nuclear plants, Ribera recalled that the owners of these plants cannot close them on their own, but must be authorized and Red Eléctrica must report if their closure puts the security of supply at risk . For the minister, the strong criticism of the electricity sector is a “first hot reaction”, because “they may not like very much that their profits increase only a little and not as much as they have increased” since CO2 prices soared and of gas. And he recalled that the measures have “a temporary nature associated with the time that this extraordinary situation will last.”

For his part, the president, Pedro Sánchez , insisted that “reviewing the extraordinary benefits” of the electricity companies is “fair” and, regarding the closure of the nuclear power plants, he pointed out that his government “will always” put “the interest of the public” ahead of “any personal interest and any particular pressure.” ” This is a resounding message for whoever wants to hear it: we are going to be on the side of the citizens, ” he concluded.

Criticisms of the sector
But criticism from the sector does not stop and this Wednesday the Association of Renewable Energy Companies (APPA) asked the Government to modify the measure that cuts extraordinary benefits, since it ensures that it will “seriously” affect the viability of renewable facilities . With the new rule, defends the employer, the affected renewable facilities will have to “sell at a loss”, causing them to temporarily stop their activity or denounce the contracts, something that could further increase the price of the wholesale market.

According to the Wind Business Association (AEE) , 21% of the Spanish wind farm will be negatively affected. Likewise, the gas employer Sedigas criticized that the Government’s measures do not reduce the taxation that affects gas consumers and demands a section similar to that of electricity. He defends that gas also benefits from the VAT reduction and the special hydrocarbon tax.