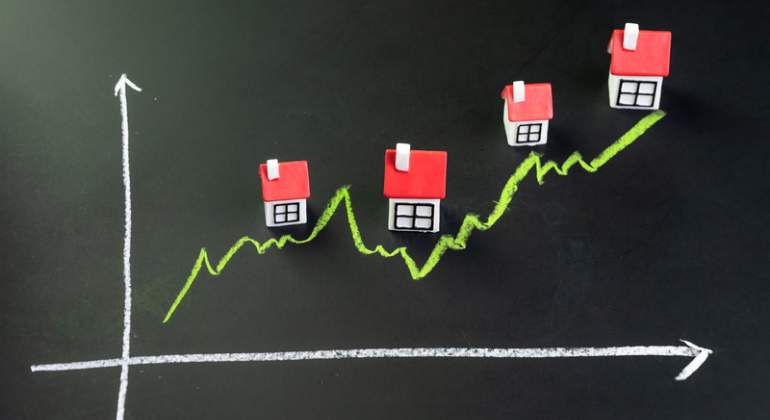 The coronavirus pandemic has led to a housing price boom in most advanced economies that may end up being a major new problem for financial stability. To get an idea of ​​the scenario to be analyzed, this data is enough: of the 40 countries covered by the OECD data, only three experienced falls in house prices in real terms in the first quarter of 2021.

It’s no bravado to blame the pandemic: historically low interest rates , savings accumulated during lockdowns, and the desire for more space as people work from home have encouraged households to seek a new roof. , driving prices up.

The annual growth in prices of housing in the entire group of rich OECD countries reached 9.4% – its fastest pace in 30 years in the first quarter of 2021, to the recovering economies caused severe recessions by covid last year.

National data suggest that the general trend continued into the second quarter. In the US, house prices rose in April at their highest annual rate in nearly 30 years. Strong growth persists in the UK, South Korea, New Zealand, Canada and Turkey, among others.

How good or bad is this situation? As Claudio Borio, head of the monetary and economic department of the BiS (Bank for International Settlements) explains to the Financial Times , in the short term this price growth can be “a good thing for the economy, because people who Since she owns a home she feels richer and can spend more due to the valuation of her assets. “

However, if this rise persists, it could turn into an unsustainable boom that ends up pushing activity “backwards” , especially if it is accompanied by strong credit expansion, he warns.

Enrique Martínez-García, senior research economist at the Federal Reserve Bank of Dallas, goes further, who points out that there are countries with clear symptoms of “real estate fever”, something that he attributes to the fiscal and monetary stimuli applied during the pandemic. He is not the only one seeing bubble signals similar to those of 2008 . In addition, it affects the extra savings of those families that already arrived in a good situation to the pandemic as a flow directed to the acquisition of a home.

Not all the blame has been on the stimuli. According to Mathias Pleissner, an economist at the rating agency Scope Ratings, the situation has been “amplified by the lack of supply and the increase in construction prices.”

Construction inventories have been shrinking as global supply chains have come under pressure, and the cost of materials such as steel, wood and copper has risen rapidly, Pleissner notes. Brett House, deputy chief economist at Canadian bank Scotiabank, directly believes that this imbalance between supply and demand “is only going to increase” in the coming months , adding more risk to the situation.

The first direct consequence of this context is that median house prices in the OECD are growing faster than incomes , making housing less affordable. An increase that is already being faster than that of rents.

This is confirmed by a recent study by Oxford Economics, which concludes that properties in advanced economies are overvalued by 10% compared to the historical trend . “The current housing rally is already quite long, reaching the decade, and the weighted increase in real prices of 43% is also high by historical comparison. The current boom appears to be perhaps the second longest and the third largest. (in terms of price increases) since 1900, “says the study.

“Some data suggest that the longer the housing boom lasts , the greater the risk of a major setback. Regarding individual economies, the risk indicators show a mixed picture: the riskiest markets seem to be the Countries Netherlands, Canada, Sweden, Germany and France ” , also reflects the analysis of Oxford Economics.

Mitigating factors compared to 2008
However, the fact that this boom is not anywhere near as great as the period before the great financial crisis – the aforementioned overvaluation was 13-15% -, makes the chief economist of the firm, Adam Slater, iron out the pessimism a bit.

The economist emphasizes that the main causes of these increases are temporary factors , such as tax incentives from governments and economic losses related to the pandemic, see the interruption of global supply chains. In addition, he adds, credit growth is lower than before the global financial crisis , suggesting “a lower risk of decline compared to, for example, 2006-2007.”

Along the same lines, Deniz Igan, deputy director of the macro-financial division of the IMF’s research department, points out that the largest mortgage firm has been driven largely by people with a solid financial position and that in most countries Households were less in debt than before the financial crisis, suggesting a lower risk of the situation following the same path with a wave of defaults and desperate sales at low prices.

Another key factor that is different from almost 15 years ago is the mentality of central banks, more vigilant now after being marked by the previous real estate crisis. While the European Central Bank (ECB) has asked the EU statistics agency to include house prices in its headline inflation calculation, New Zealand’s central bank has added housing to its mandate. Aditya Bhave, an economist at Bank of America (BofA), believes that, unlike in 2008, supervisors “are now very aware of the risks, which significantly reduces the chances of an adverse outcome.”