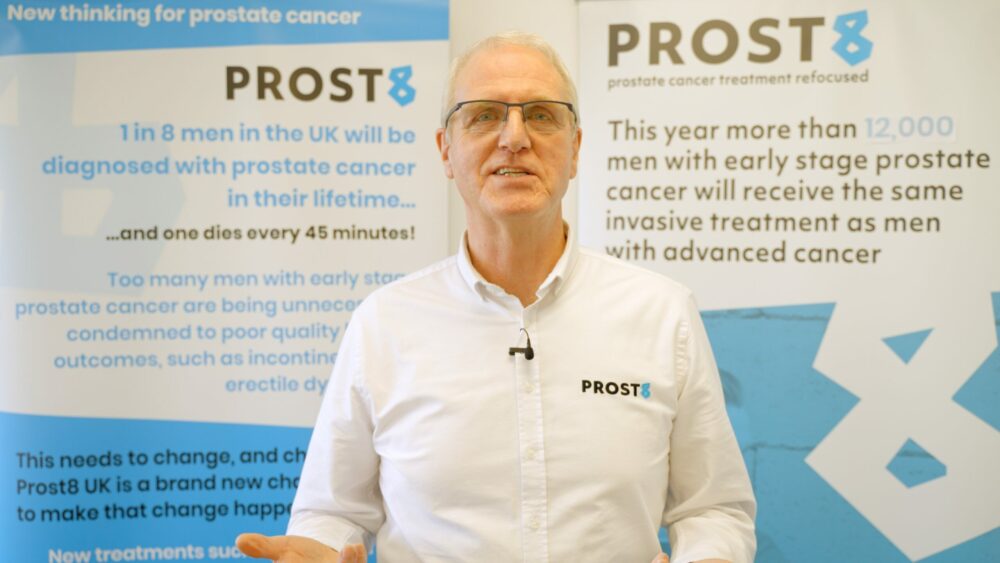 Every year, up to 12,000 men with early-stage prostate cancer will receive the same invasive treatment as those with advanced cancer, which often leads to urinary and erectile dysfunction.
But a new focal therapy that uses high focused beams of ultrasound (HIFU) or cryotherapy to target and treat the cancer leaving surrounding organs and tissue unharmed, is set to offer a new lifeline.
With three hospitals currently offering the treatment in the UK, a new campaign has launched to treble the number of hospital units offering the non-invasive option and help thousands of men access better treatment.
The One in Eight campaign by Prost8 – a charity that is fighting to make overtreatment a thing of the past and was created to help the one in eight men diagnosed with less aggressive prostate cancer access better treatment, also aims to put pressure on the NHS to encourage them to adopt the non-invasive options for men who are eligible.
The launch of the campaign coincides with the results of a 10-year study which found focal therapy can control cancer just as well as radical surgery but crucially, it has better lifestyle outcomes.
Chair of Urology at Imperial College London, Professor Hashim Ahmed, who has been leading the UK’s focal therapy study, said: “This research signals a huge breakthrough for focal therapy – as we now have long-term data from a number of sectors, surgeons and hospitals across the UK.
“The treatment, which could be available for nearly 12,000 men diagnosed each year with intermediate grade cancer that has not spread outside of the prostate gland, is showing excellent outcomes for cancer control with better quality of life.
“Men have a right to be treated locally – this is a national health service.
“It’s critical that men are presented with options and are able to get the best treatment available to them and Prost8’s ONE in EIGHT campaign will enable that.
“Prost8 is extremely valuable as we need a charity that is focused on this treatment.
“Just as importantly, the few hospitals currently offering this treatment can’t cope – we need more hospitals, we need more surgeons, we need more capacity.
“Many charities focus on survival at any cost – and while Prost8 doesn’t degrade that aspect, they want to treat the cancer, they recognise that quality of life is just as important as quantity of life.
“Getting more focal therapy units into our hospitals shows that we recognise how you get there is just as important as if you get there.”
Professor Ahmed revealed private options are available, but it costs each patient between £12,000 and £16,000 – which can be very limiting.
Prost8, the charity leading the rollout, was founded by Paul Sayer, after he received HIFU from Professor Ahmed three years ago.
Paul, 66 said: “People don’t realise that there are other forms of non-invasive treatment out there that can help you live longer and better following a prostate cancer diagnosis.
“I went in as a day case, had the treatment over an hour-and-a-half, came out with a catheter which was soon removed and that was it.
“I have just had my three-year check-up and it’s totally clear.
“Before I had prostate cancer, I never got up in the night to wee and I still don’t.
“This treatment allowed me to still be me. I have had no change in functionality.
“As a charity, we are currently helping around 50 men get access to this treatment as in almost every case when men speak with their consultant regarding their treatment – focal therapy is not presented as an option and only through word of mouth or research do they find it.
“I have conversations with guys where I’m in tears and they’re in tears – these are tough conversations, and they need to know there’s a great option available to them.
“The campaign is a very low ask to achieve such an important change and create a lasting legacy.”

The NHS currently offers surgery, radiotherapy or hormone treatment and for many men they are sent home on ‘active surveillance’ – effectively a watch and wait process.
Hospitals which currently offer the treatment include Imperial College, University College London Hospital and Southampton.
The new rollout will extend the unit at Southampton as well as create new focal therapy suites in Wrexham, Norwich, Norfolk, Scotland and London’s Guys and St Thomas’ and others nationally.
The focal therapy suites cost up to £500,000 each to deploy – as Prost8’s campaign aims to raise £3million for the first phase rollout.
With one in eight men diagnosed with prostate cancer in their lifetime, Prost8 is calling on one in eight of the adult male population (24 million) or their loved one to donate at least a £1, which will help create the £3 million needed for the six suites.
Grant Gooding was just 58 when he was diagnosed with prostate cancer and only found out about focal therapy after posting about his diagnosis on social media.
He said: “I had raised PSA levels and then the MRI scan showed shadowing – they gave me a whole bunch of leaflets on Prostate Cancer and what you can do with it.
“There were five routes – one was surgery, three were some form of radiotherapy and the fifth one was what they call ‘active surveillance’.
“I put on social media about my diagnosis and asking if anyone had any recommendations over treatment – I began talking to lots of different men about the options and was surprised had how many had had it and their wide variety of experiences.
“I was also introduced to Paul at the Prost8 charity.”
Grant, who worked as an analyst in London added: “I had a spreadsheet of various tabs going through the various routes and outcomes which was hard to analyse – HIFU which was one of the treatments, seems to be the better treatment really because of the side effects.”
Grant helped access the treatment through Paul and his team at Prost8 and had it in September last year.
The father-of-one told how he’s now supporting the campaign as his life has remained completely unchanged post-treatment and feels especially “grateful” to Prost8 for highlighting the treatment to him.
Go to http://www.prost8.org.uk/1in8/ to donate to Prost8’s 1 in 8 campaign.