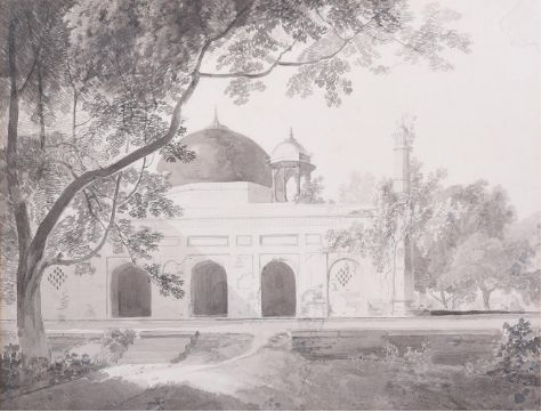 Dreweatts is thrilled to announce that it is to offer the contents of Château de Lasfonds in France for auction, on behalf of an international collector on November 16, 2022. The collection has been carefully curated over the last 30 years and one of the themes of the collection is travel. Among a spectacular selection of artworks is an important group of works in the Anglo-Indian tradition by Thomas and William Daniell, the uncle and nephew duo, celebrated for their orientalist scenes produced on their tour of India between 1786 and 1794.

‘Panchganga and Durga Ghats, Benares, India, circa 1800′ by Thomas Daniell

The Daniells are renowned as the greatest European artists to visit India in the 18th and 19th centuries, Thomas (1749-1840) and his nephew William Daniells (1769-1837) played a pre-eminent role in recording and documenting the country for European eyes. The works created during their seven-year tour of the country offered a unique insight into the architecture and scenery of this far and exotic land.

Encouraged by other artists such as William Hodges, who made a tour up the Ganges in 1780-1783, the Daniells set off from England in 1786. First going up the Ganges, 1788-91, then doing a circular tour around Mysore from Madras, 1792-9 and finally on their return journey to England in 1793, visiting Bombay and its temple sites, sketching, drawing and painting as they travelled. William, who was only sixteen when he accompanied his uncle to India, also kept a detailed diary of their travels which is now in the British Library’s collection.

Arriving back in London in 1794, the Daniells turned their substantial body of material into finished watercolours and oil paintings, which they then exhibited at the Royal Academy and British Institution in London in the early 1800’s. They also embarked on a grand and expensive project to translate their watercolours into print, their tour de force entitled Oriental Scenery. From 1795 to 1808, they produced six volumes for their views of India, including 144 aquatints all engraved by the artists themselves. The works in the auction illustrate this complete artistic journey, including examples of en-route draftsmanship, as well as finished oils and prints, the combination of which managed to capture the attention and interest of the British public for this very distant part of the Empire.

During their first tour which took them along the Ganges, the Daniells sailed past Benares and made numerous sketches and drawings from the river which were later used as the basis for fully worked up oils. On 4 December 1788, William recorded in his diary: ‘The general view of Benares from the Pinnacle was so very grand that I stayed on Board the whole day to draw it, fearing if we let slip the present opportunity that we might never see it in a better point of View’ (M. Hardie and M. Clayton, Walker’s Quarterly, 1932). The Daniells returned to Benares for a longer stay on their return voyage a year later (November-December). Benares (now known as Varanasi) continues to be the religious capital of India and one of the most important places of pilgrimage and of ritual bathing. The Panchganga Ghat, as its name indicates, is where five rivers are supposed to meet. The Daniells depicted the Ghats in their Oriental Scenery and the accompanying text describes them as ‘the most considerable of any of the Ganges…..vast multitudes of devotees….. to this city perform penance and transact mercantile affairs. An opinion prevails amongst them that drawing the last breath at Coss (Benares) is a circumstance much in favour of their enjoyment of future happiness’ (T. & W. Daniell, Oriental Scenery, 1795-1808).

From 1813 to 1823, William Daniell travelled around the UK and documented some of the finest views as preparation for Richard Ayton’s book, A Voyage round Great Britain, which was published in eight volumes over the period of 1814 to 1825. His plan was to journey around the whole coast and record views of places of interest, describing the scenery and the conditions of the people. The journey was completed in six separate trips, commencing from Land’s End in Cornwall. On his returns to London, he would translate his elaborate sketches and notes on colour and texture into aquatints that were highly praised for their artistic quality. At the same time Daniell worked on other projects, which included a large number of Scottish paintings for the Academy Exhibitions.

Among the works being offered at auction is ‘Mausoleum of Nawaub Asoph Khan, at Raje Mahel’, a preliminary study with rapid pencil drawing executed on the spot. The work features distinctive handling attributable to William Daniell, which was later worked up with watercolour and eventually engraved for Oriental Scenery 1801. It carries an estimate of £6,000-£8,000 (lot 58).

when home, including a large number of Scottish paintings for the Academy Exhibitions such as, ‘The Town and Entrance to the Bay of Cromarty’ featured in this sale. A stunning seascape depicting the beauty of the bay of the small Highland town of Cromarty in oil on canvas. It carries an estimate of £15,000-£25,000 (lot 60). Another magnificent Scottish seascape by William Daniell in the sale is titled ‘A View of Culzean Castle on the Ayrshire Coast’ and depicts the wildness of nature in crashing waves across the rocks at the foot of the castle on high. In oil on canvas, it is estimated to fetch £7,000-£10,000 (lot 59).

‘Mausoleum of Nawaub Asoph Khan, at Raje Mahel’, by Thomas and William Daniell