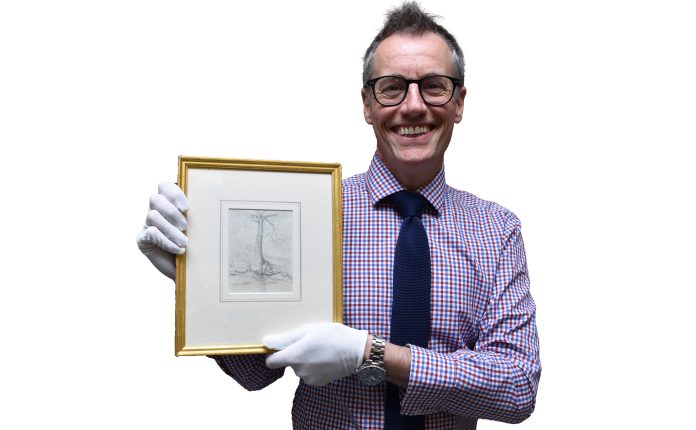 A drawing by John Constable with an exceptional pedigree will appear on the market for the first time in over 40 years in December at Halls auctioneers of Shrewsbury.

Inherited from a collector who bought it at London dealers Agnew’s in 1979, the drawing of a tree on the banks of a river in Constable’s birthplace of East Bergholt featured in the Arts Council exhibition of the artist’s works in 1949 and is listed as being in the Wildenstein Constable centenary exhibition in 1937.

It also offers a rare insight into the life of the artist. Unusually, it is dated ’20 April 1821’ and research has revealed that the Suffolk Records Society (SRS) has a letter dated on this very day, written to his wife, Maria, in London. It was written in the latter part of the 20th from East Bergholt.

Constable records in his letter that he called on the Godfreys in the morning and remarks that the hot cross buns he brought from London were ‘’quite acceptable’’. Edward Godfrey was the local squire of East Bergholt, placing the location of the drawing near the village.

A charming insight into Constable’s character

“The letter is a charming insight into this man’s character, who comes across as warm, humane and engaging,” says Halls Director of Fine Art, Gerry Berwyn Jones.

The plight and travails of some mutual acquaintances are recounted, along with Constable’s visits and his love of the countryside, which is particularly evident: “I have called on most of the neighbours—drank tea at Ann’s last evening—had a stormy walk home over the heath. . . How sweet and beautifull is every place & I visit my old haunts with renewed delight. . . Nothing can exceed the beautiful green of the meadows, which are beginning to fill with buttercups, & various flowers – the birds are singing from morning till night but most of all the sky larks. How delightful is the country, but I long to get back to what is still more dear to me… I hear a poor account of poor old Driffield. I shall if possible call on him on my way back…’ (2) and he signs off ‘How is my baby boy? Kiss all my darlings. Have they missed me?’ (3) This all brings the drawing to life, for it was drawn on the very same day he wrote these words and met the people he mentions in his missive.

The fine study of a tree on the bank of a stream (the sight size is 11.9 x 9.2cm) was once in the collection of Dr H.A.C. Gregory, M.C., a well-respected connoisseur noted for collecting the best examples by Constable.

It is also illustrated in Graham Reynolds’ book/raisonné ‘The Later paintings and Drawings of John Constable’ (see plate 224), where it is listed as ‘Whereabouts unknown’; not now!

Halls have not been able to identify the sketchbook it comes from but believe it could be from the same one as another drawing of a willow stump which was also drawn in April 1821 at East Bergholt, which might make it one of a series of tree studies.

“Like so many works of art, it is often an object’s story and its provenance that can combine to be as important as the work itself,” says Berwyn Jones.

The drawing will appear in Halls Fine Art’s fine furniture, pictures and works of art sale, The Christmas Auction, on December 7. The estimate is £8,000-12,000.