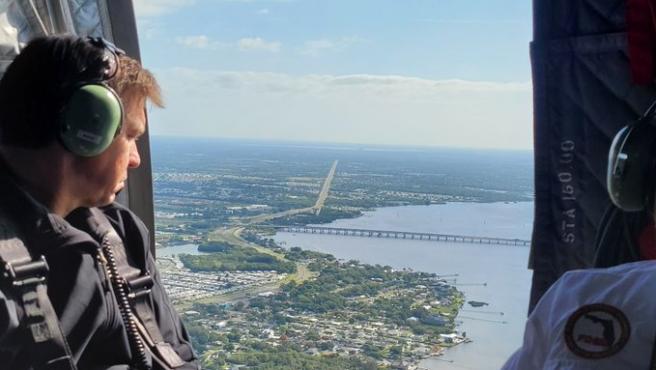 Authorities in Manatee County, on the west coast of Florida , are investigating on Monday a possible second leak from a reservoir containing liquid phosphate waste before it collapses to avoid an ecological disaster, local media reported from images taken by a drone. .

The state of emergency decreed on Saturday in the vicinity of the Piney Point plant, owned by the HRK Holdings company and in disuse since 2001, forced the evacuation of more than two hundred inmates from the central jail in that county.

As announced in the last hours Randy Warren, spokesman for the Manatee sheriff’s office, 267 inmates were transferred to a correctional facility in neighboring Polk County.

Another 721 inmates were taken to the second floor of the facility along with a hundred members of the staff and medical team.

The sheriff’s office expects a water level of about a foot if a second breach occurs in the Piney Point Reservoir, a possibility that worries authorities due to its proximity to Tampa Bay.

An infrared drone this morning identified what could be a second breach in the plastic lining surrounding a reservoir at the former phosphate plant, county officials said, according to the Tampa Bay Times.

Florida Governor Ron DeSantis visited on Sunday the area where the disused plant is located and its retention ponds, one of which, which contains between 2.6 and 3.000 million liters of liquid , has cracks and leaks and there is danger of it breaking and releasing its contents.

After a tour by air, the governor announced that 20 more pumps and 10 aspirators have joined the tasks to unload the water from the pond in an orderly manner, in order to be able to increase the withdrawal rate to 132,400 liters per minute.

“I am concerned about the threat to public safety, homes, businesses and, of course, marine life,” said Vern Buchanan, Republican congressman for the coastal city of Sarasota, after flying over the area by helicopter.

Speaking at a press conference to report on the current status of the reservoir, Jake Saur, Manatee’s director of public safety, noted that the Army Corps of Engineers and other specialists are on the scene trying to assess the drone’s findings.

Saur said they currently have four main water extraction lines , in addition to other smaller pumps, and that evacuation orders remain in effect.

The pumping of water from the pond has so far been done at a rate that will empty the pond in 10 to 12 days, according to estimates.

According to a website from the Florida Department of Environmental Protection, the liquid from the south pond of the phosphate plant is seawater from the drainage of a nearby port mixed with water from the plant’s industrial process and rainwater.

“This water meets the quality standards for marine waters with the exception of its pH (acidity level) and the levels of phosphorus, nitrogen and ammoniacal nitrogen. It is slightly acidic, but not at a level that may be of concern,” he says. the Web.

The environmental organization Sierra Club has been asking Americans for years to demand legislation from their congressmen to ban the deposits of the liquid radioactive waste that is produced by processing the rocks from which phosphates are extracted.